Auth0 adds to the single data center high availability solution by extending the cluster with a geographically distributed data center where the recommended maximum round-trip latency should not exceed 100 ms. The result is the high availability geo cluster, which is an active hot standby configuration with automated failure handling that can survive a regional outage. 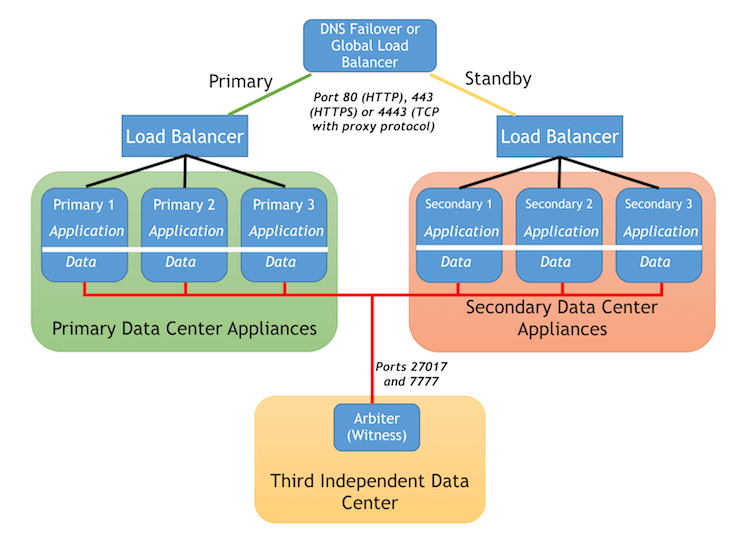 The standard configuration is a stretched cluster that consists of the following pieces:

The Arbiter node acts as an independent witness to the primary and secondary data centers.

The Arbiter does not store data or execute application logic, but acts as a witness between the primary and standby data centers. By independently verifying if a data center is down or not, it prevents both from becoming active (such a scenario is known as the "split-brain" condition).

Since the Arbiter isn’t storing data and doesn’t run any services, it can be a small instance with two cores and 4GB of memory.

You must enable outbound internet connectivity from the Arbiter for system updates.

You will need to deploy a global load balancer that supports an active/standby configuration. This will be configured to begin using the secondary site if the primary site load balancer is unavailable.

Two examples of products that support this configuration are the F5 Global Traffic Manager and the AWS Route 53 DNS service. The global load balancer is typically positioned in front of the local load balancers in each data center.

Auth0 requires the use of a load balancer or DNS failover solution that prefers to serve application requests using the primary data center, despite the fact that the PSaaS Appliance instances in the hot standby data center are active and able to serve the requests.

The application tier remains unaware of the locality of the primary data node, whereas the data layer resolves the location of the primary node (the only node that receives application queries). The primary node serves all read and write activities. For example, if the data centers for the geo cluster are in State A and State B and the ones in State B are active, any request serviced by the State A nodes at the application level requires data to then be written to a node in State B. This generally results in poorer performance due to the requests (and resulting round-trips) required to obtain the necessary data. Using a global load balancer or DNS failover solution to prefer the primary location, unless it is not healthy, mitigates this performance issue.

The data tier operates independently of the application tier as a single cluster stretched across two geographically distributed data centers. Within each data center are three nodes, each provided local data redundancy and failover.

Only one of the two data centers is designated as primary, and the instances within that data center are weighted such that those are always preferred for incoming requests. All read and write activities then pass through the single, active primary node.