If you want to expose an API publicly on the Internet, authorization will be a requirement for you sooner or later. You want to verify that the client consuming the API has the appropriate permissions.

This guide is exactly about that. We'll be securing an API written using Ruby On Rails, with Auth0 as the authorization server.

There's a repository with the code so that you can follow along in Github.

I didn't explain what I mean by securing an API yet. Essentially, we're ensuring that protected routes are accessible only for the users with enough rights.

When it comes to security, it's generally considered a bad idea to roll your own bespoke implementation. Instead, I'm using OAuth, a battle-tested and widely used authorization framework for web applications.

In this context, Auth0 fulfills the role of the authorization server and abstracts a significant part of the work away from us. That way, we can focus on delivering value to our users.

Without getting into too many details on how OAuth works, we assume that calls to our API will include a bearer token using the industry-standard JWT format. The token contains a series of claims regarding its issuer, how long it is valid, and what rights it grants. Let's have a look at a sample token:

We're going to implement verification for that token and reject requests that don't have the required permissions.

We're getting started with our base application, bootstrapped with Rails 6. This branch is a good starting point. You can download it by running the following command in a terminal window:

The API has three endpoints with different levels of protection:

To run the application, we first need the correct ruby version. The easiest way to do so is to use a version manager like rbenv. Once you install it, run this command inside the repository to install the right version of ruby:

Install the dependencies for the application:

And finally, run the application:

You can verify that the application is working correctly with curl:

The command will return a 200 code, plus the message:

Creating an API on Auth0

To secure the API with Auth0, you need an Auth0 account. If you haven't one, you can sign up for free right now. In the APIs section of the Auth0 dashboard, click Create API. Provide a name and an identifier for your API. You will use the identifier as an audience later, when you are configuring the access token verification. Leave the Signing Algorithm as RS256. 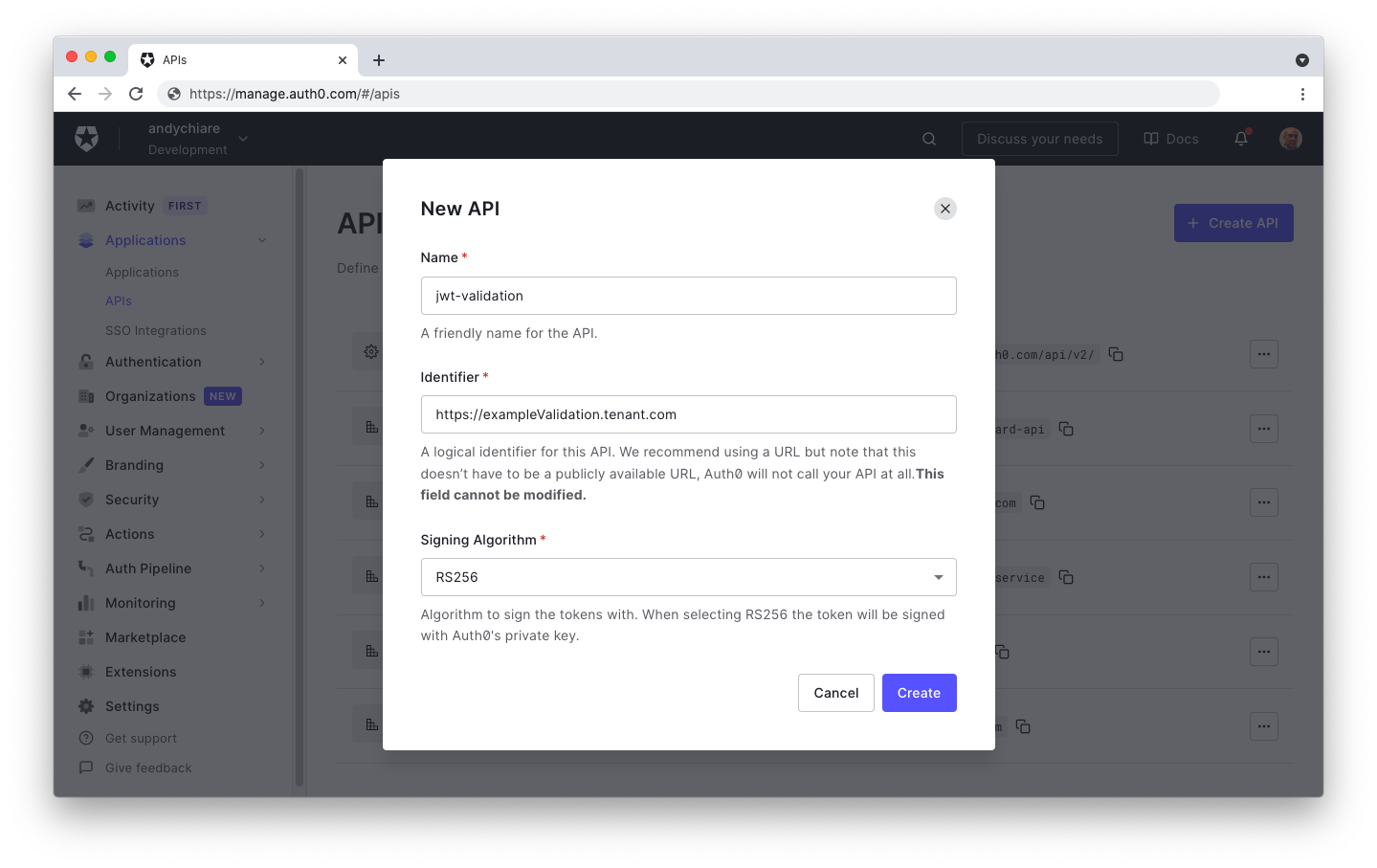 Once you create the API, go to the Permissions tab in the API details and add a permission called read:admin-messages. 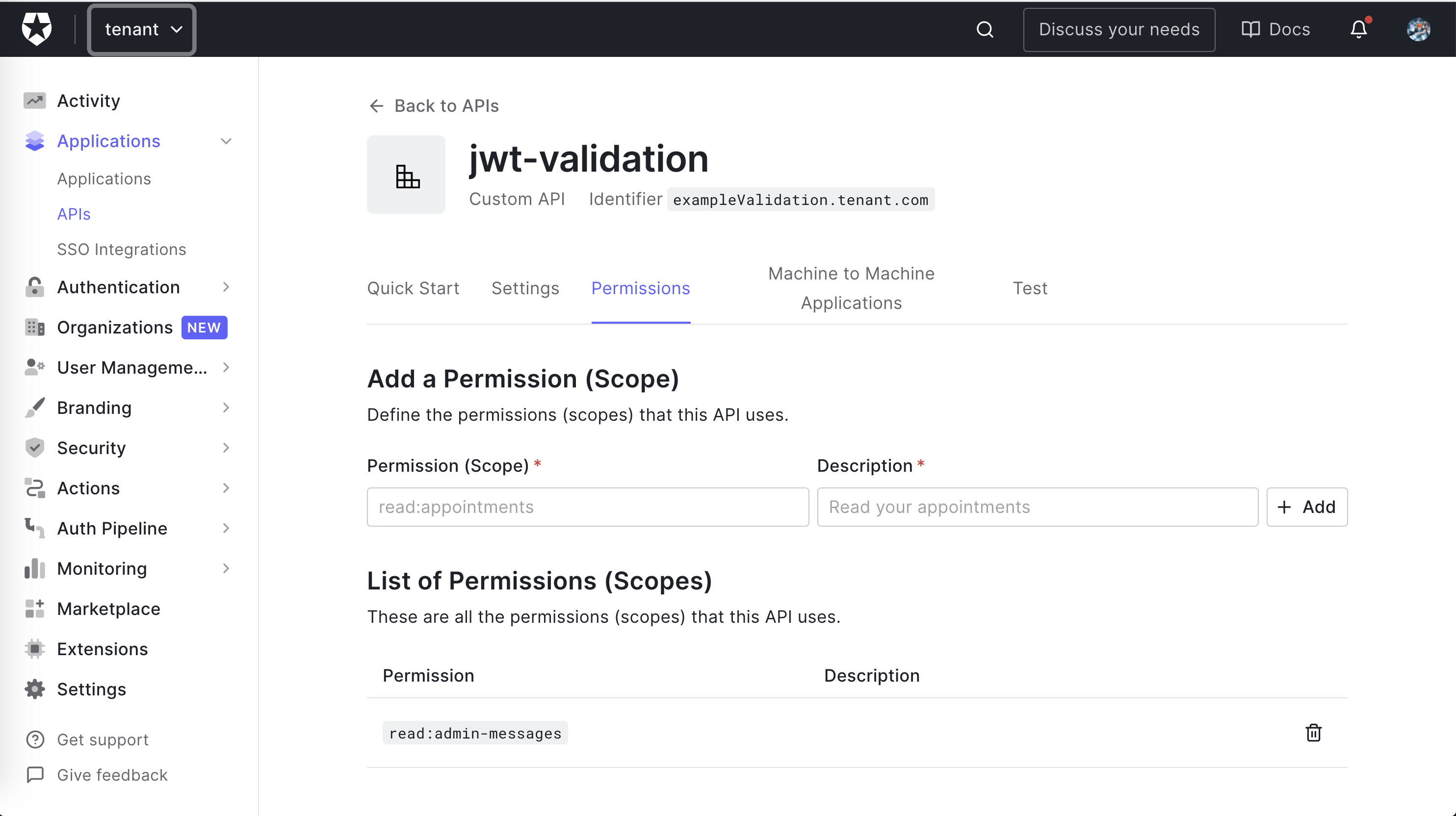 Note: While you are in the Auth0 Dashboard, take note of your Auth0 domain. You will need it soon. This is a string in the form YOUR-TENANT-NAME.auth0.com where YOUR-TENANT-NAME is the name you provided when you created your account with Auth0. For more information, check the documentation.

Preparing the Application for Validation

Alright, our application is ready to go and in dire need of some security. Before that, we need to add some configurations.

You dutifully stored the domain and the audience after creating the API, right? Let's use them. In the Rails world, the convention is to add this in the config folder, using YAML. The file is called config/auth0.yml.

We don't want to store credentials in our code, so we'll export the values as environment variables, named AUTH0_DOMAIN and AUTH0_AUDIENCE. The configuration uses those values and keeps them safely away from source control!

Now, set AUTH0_DOMAIN and AUTH0_AUDIENCE environment variables to the domain and audience values for your API.

With this, the application is ready to connect with Auth0. Let's move on to the implementation.

Before we get started, let's talk for a second about authentication frameworks for rails. There are a bunch of alternatives in the ecosystem, such as CanCanCan, or devise.

However, our case is an awkward fit for those. We don't want to take over user management. We only want to validate tokens issued by the authorization server. In this case, using a framework won't bring us as much benefit as something like, say, Spring Security. That's why we only rely on an extra gem, jwt.

The jwt library brings a lot of functionality to make our API able to validate and manage tokens in JWT formats like the ones issued by Auth0. We need to do three things:

Let's get down to business. We're implementing the verification/decoding logic in the lib folder, in a file called json_web_token.rb. We're starting by fetching the JWKS data:

As you can see, through the issuerUri we know where to look for the data. Then, we parse the key so that we can consume it in the library.

The next step is to add an extra method to the class, verify, that verifies and decodes the token at the same time:

This is all the code that we need for the actual verification. Neat, isn't it? But our controllers are still insecure. Not for long, though.

To make it as convenient as possible, we're creating a hook that we're going to run before any route that needs authentication. To make it available for every controller, it lives in the app/controllers/application_controller.rb:

We take the token from the standard Authorization header. Then, we verify it with the code from the previous section. There are two possible paths after running authorize!:

We're protecting both the protected and the admin routes with this hook, thanks to before_action:

Don't you feel better knowing that the application is not exposing private stuff anymore? I definitely do. But we got to help our users. A blank 401 message might not give them enough information to debug the issue. Let's extend the hook to return something more explicit:

Now we get a message that's more helpful than an HTTP code without a body.

The command will return a 401, because we're not authorized. We need to get a valid token from Auth0.

The simplest way is to access the API section of your Auth0 Dashboard again, select the API that you created before and click the Test tab. In this section, you can get a temporary token to test your Web API by clicking the Copy Token icon as shown in the following picture: 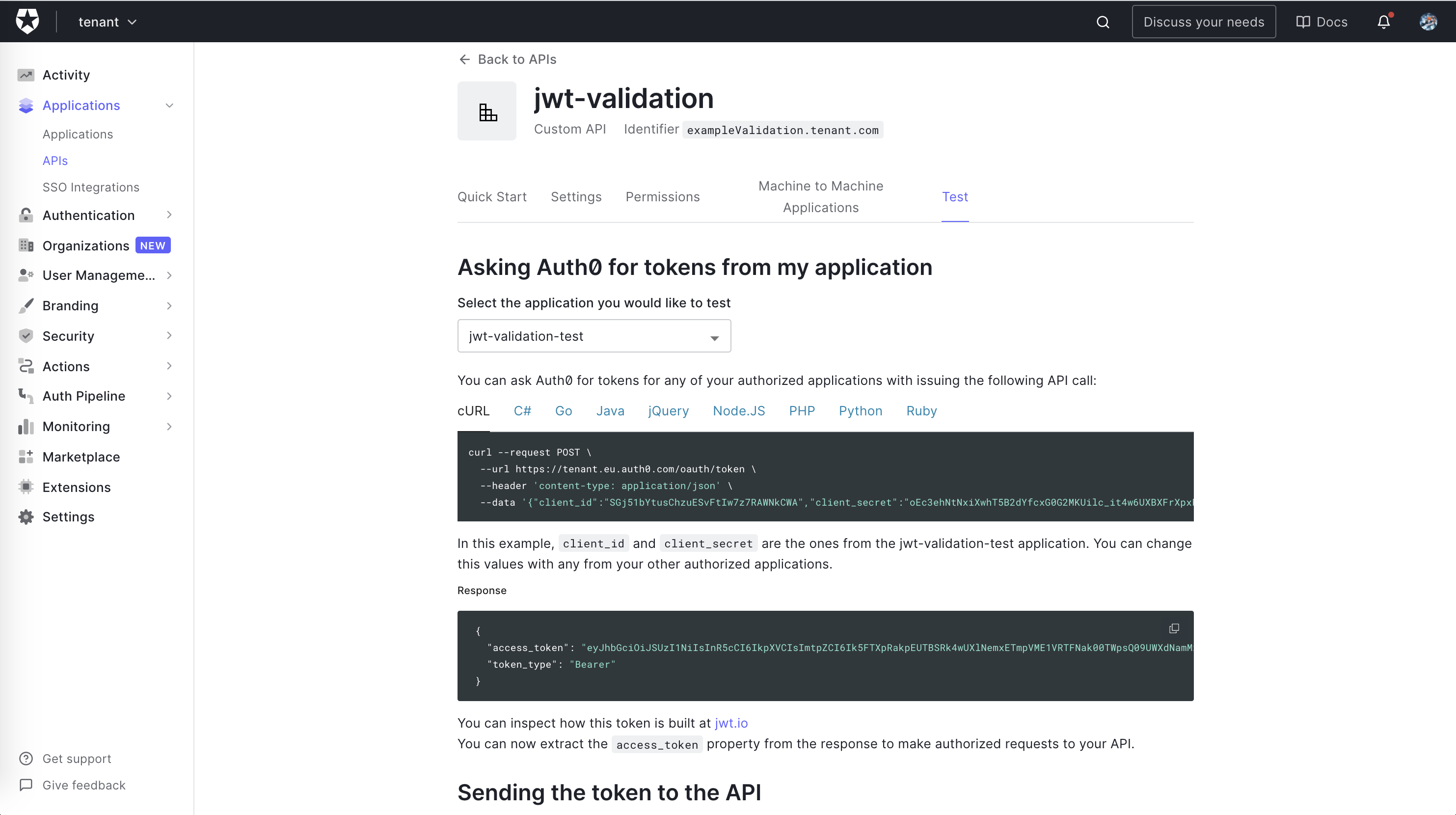 Let's attach the token to the request:

There's one requirement pending. As you might recall, for /api/messages/admin a valid token isn't enough. Rather, we expect the correct permission in the permissions claim. This extra check allows us to define more granular access criteria for our endpoints. This functionality is implemented in the add-rbac branch.

We're adding a new method in the application_controller, check_permissions. It takes the decoded token and looks for a given permission:

We use a before_action again to protect the admin endpoint:

With this, each route in our sample application is safe the way we wanted.

If you try to call the /api/messages/admin endpoint with the token we generated before, it will return a 401. Our token is valid but doesn't have the necessary permissions. Let's create a new one!

Back in your API configuration page on the Auth0 Dashboard, select the Machine to Machine Applications tab. You'll get a list of applications, some of them with the (Test Application) label in the name. These applications are automatically created by Auth0 when you create an API there. They are meant as test clients from your API. One of them should have the Authorized switch on. Click the dropdown next to it and check the read:admin-messages permission: 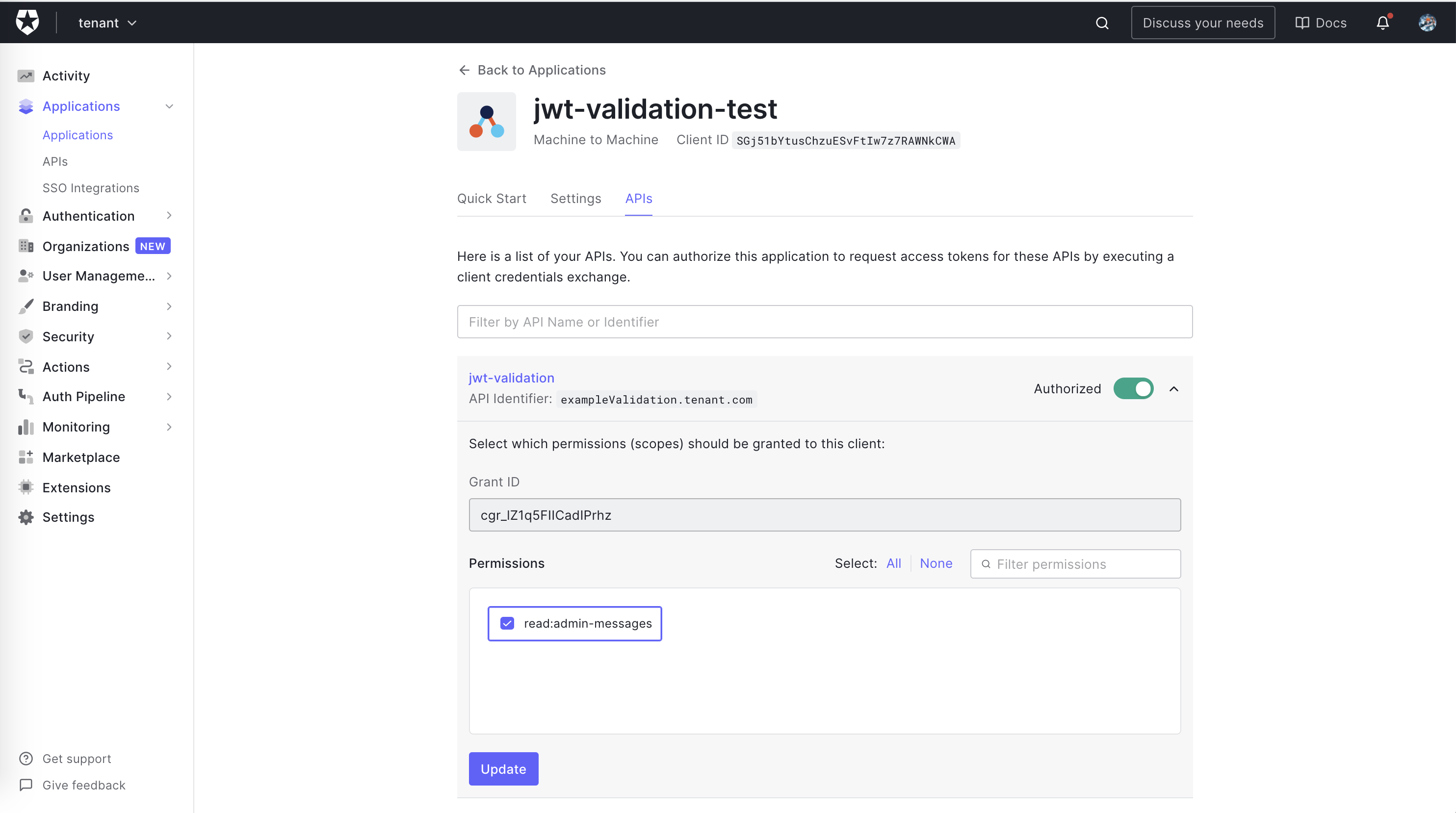 Then, click the Update button, move again to the Test tab, and copy the new token that has been generated for you. Let's try again:

In this guide, we've added authorization to a Rails API by using Auth0 as an authorization server. Thanks to the jwt gem, we don't have to invest much effort. We use the library to decode the bearer token that the API receives. After that, it's a matter of checking the relevant routes before each request. 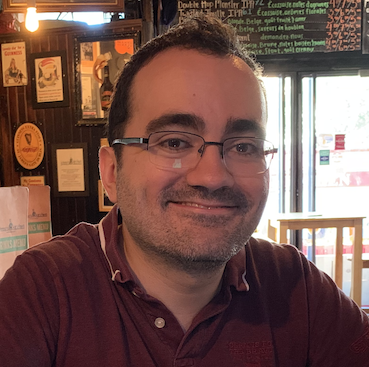