TL;DR: In this tutorial, I'll show you how an API Gateway can be a great tool when you have multiple microservices that need to share multiple tasks. You can get the code example here.

Microservices is an architectural style with the basic idea of decomposing a system in a collection of services, each one implementing a particular capability/feature of the system itself based on business, technical, and other requirements.

This has several benefits compared to a monolithic approach:

The above points can be summarized with two keywords: independence and isolation.

This concept has been riding high during the last years with blog posts, articles, websites, and even dedicated conferences although this is nothing really new—but rather a culmination of best practices in the modern web era, pushed by a tech giant that felt the need almost ten years ago.

Most of the time we don't necessarily have the same web scale, but we can benefit anyway from the paradigm of microservices.

The challenge though is that with microservices the knowledge is spread among multiple little pieces. However, on the other hand, the end game of your application is, most of the time, the exposure of what you're building through an uniform API.

So, we have two sides of the same coin: on one side, we want to break up our app into a set of services and evergreen them; on the other, we still want to offer an uniform experience.

Suppose you need to create a Coffee order system that will let people, registered as Customers, request for a coffee through an Order.

After a bunch of meetings, everybody in the company agrees that the User and registration part of your application will be written in JavaScript and run on Node.js, while the Order system will be written in Go. Among the technical requirements, you want all the requests must be authenticated and, in order to prevent flooding, you want to put a rate limiting policy.

Now, with such requirements, a couple of questions stand:

It turns out that, no matter the way you're doing microservices (whether you're dividing your system by business features, by domain, or coming up with a microservice architecture starting from your data), there are parts of them that are sharing functionalities.

Microservices need a superglue and that glue is an API Gateway.

An API Gateway is a centralized middleware that encapsulates the internal system architecture and provides an API that can be shaped based on real client needs rather than simply returning what the particular microservice is sending you back. These gateways are effectively implementing the facade pattern in the microservices world.

API Gateway can have other responsibilities such as authentication, monitoring, load balancing, caching, request shaping and management, and static response handling.

Let's move from theory to practice and see how to configure an API Gateway to serve our needs.

Let's suppose that we have Customer and Order microservices listening to http://customers and http://orders respectively. Using Docker or Kubernetes achieving such scenario should be fairly easy.

We will configure an instance of an API Gateway that will sit on the edge of our system. This gateway will serve as a router for our microservices, but we'll also move some shared logic from the microservices to it. This will enable our applications to focus on the business logic.

This gateway will also throttle all the requests based on clients' IP addresses and make sure that all the requests are authenticated based on a JWT that Auth0 is going to provide. Auth0 will work as our system of record for our users.

There are multiple API Gateways on the market. Some of them are offered by big software companies as a managed hosted solution and others are open source products. Of course, you can technically write your own solution too, but why reinvent the wheel? Instead, let's take advantage of Express Gateway.

Express Gateway is an API Gateway that sits at the heart of any microservices architecture (regardless of what language or platform you're using), securing the different pieces and exposing them through APIs. All these magic works by using Node.js, ExpressJS, and Express middleware. 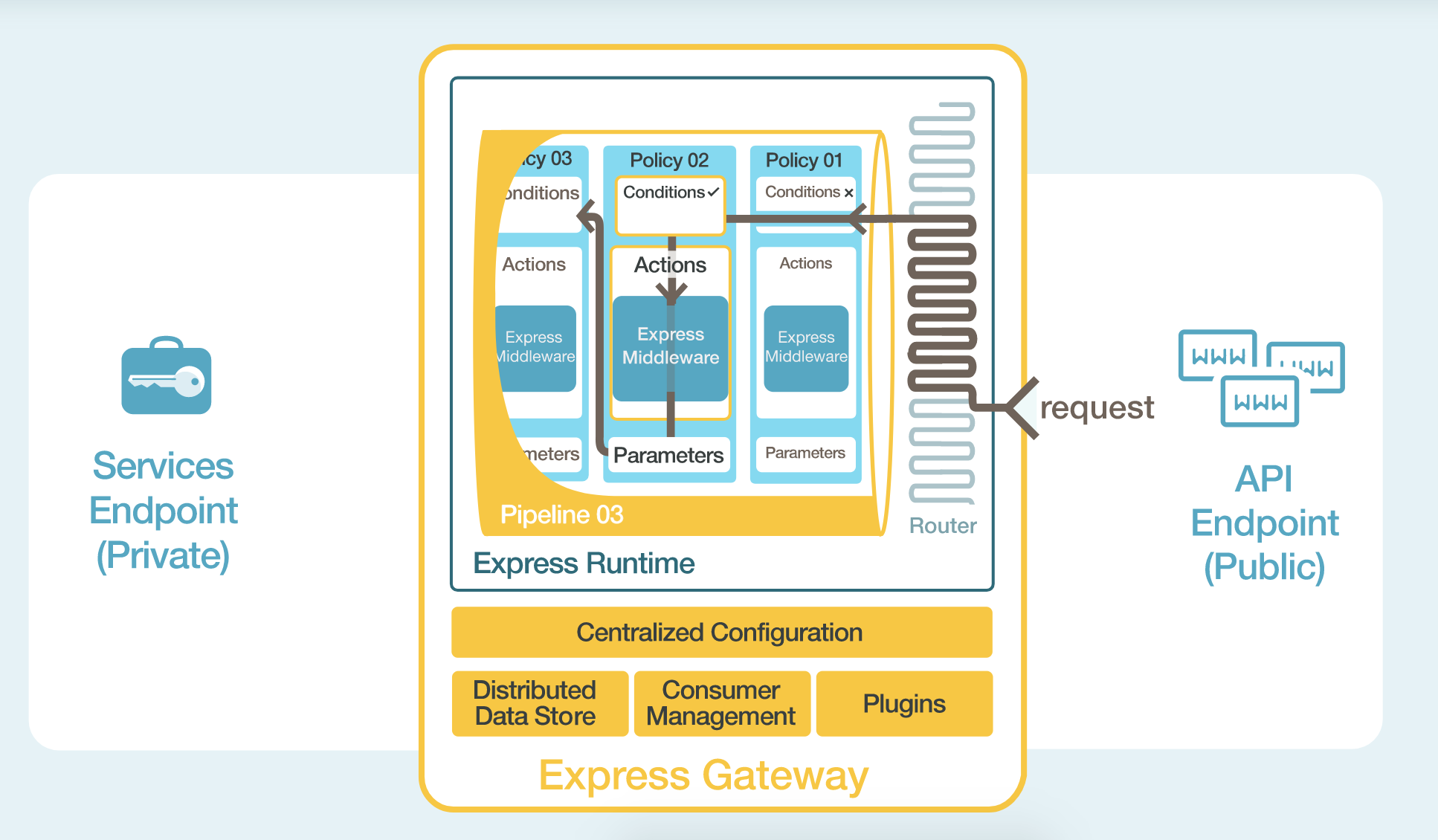 Express Gateway centralizes all the application configuration for the API use case into one YAML (or JSON) file. Within the YAML file there is an easy to understand description of how and what is configured.

This will install the command line eg in your system, so you can now bootstrap a new gateway instance:

Next, change the working directory to eg-example (cd eg-example) and modify the gateway.config.yml file. This is the file that controls your gateway’s behavior. For a complete configuration reference, you can see the documentation.

Let's go through the main part of the current configuration. The gateway will listen for HTTP requests on port 8080 (you might want to change it to 80 when going into production). Then, we have defined two pipelines (one per microservice) where we have enabled the rate limit policy and the JWT verification policy.

Note: the configuration is shown in a extended form for clarity. However, it can be shortened by using YAML references.

Note: if you want to test this locally, you'll need to make sure that company.com domain points to your local machine. This can be achieved by using dnsmasq or by modifying your hosts file, putting both customers.company.com and orders.company.com to point to localhost. Another alternative would be to manually put the HOST header to the correct value while issuing requests.

Configure the Client and the User in Auth0

Let's now configure Auth0 to work as our system of record for users and issue JWTs for them. If you don't already have an Auth0 account, sign up for a free one now.

From the Auth0 management dashboard, click on the APIs menu item, and then on the Create API button. You will need to give your API a name and an identifier. The name can be anything you choose, so make it as descriptive as you want. The identifier will be used to identify your API, this field cannot be changed once set.

For our example, I'll name the API billings and identify it as http://orders. I'll also leave the signing algorithm as RS256 and click on the Create API button. 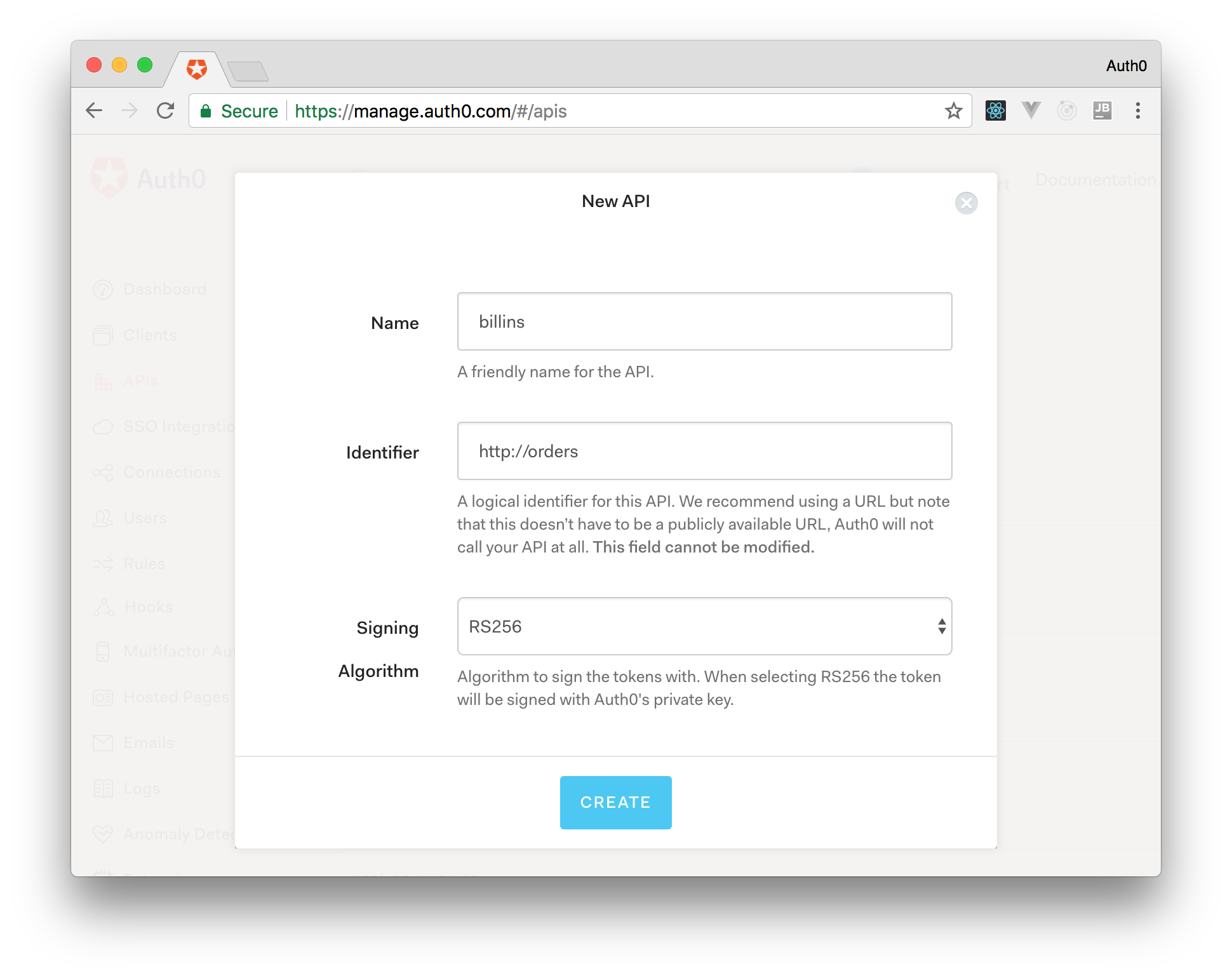 Now point your browser to https://yourAPI.auth0.com/pem (where yourAPI is the Auth0 domain that you chose when creating your account) and download the public key file. This is the key that we will use to verify that the JSON Web Tokens (JWTs) issued by Auth0 are valid. Save it as pubKey.pem and place it in the same directory specified in secretOrPublicKeyFile parameter of the jwt policy (that is, in a directory called key in the project root).

The API Gateway has now been configured correctly to handle the scenarios.

Start the gateway using npm start in the project root. Once running, let's try to issue a couple of requests to it:

You can see that the first request has been denied with Unauthorized status. That's because we didn't provide any JWT with the request, so it didn't go through.

Moreover, the second request has been refused by the rate limiting policy, without event arriving to the authentication phase. Policies are executed following the definition order in the configuration file.

Now grab any HTTP client and let's configure it to start an OAuth 2.0 authorization process against our API hosted in Auth0. We can grab all the necessary parameters going on Applications -> billings (Test Application) -> Settings -> Advanced Settings -> Endpoints

In my case, I am going to use curl, but you can use the one you prefer:

Now, by simply copying the access_token attribute from the response, we will be able to communicate with the API through Express Gateway (you can verify the returned token by using JWT.io). This is the token to be used in order to access the protected resource. So, just try to issue requests making sure that the token is now sent as a Bearer Authorization to the endpoint. The response should hopefully be 200.

Thanks to Express Gateway, we have moved two shared concerns (authentication and rate limiting) from the microservices to a centralized middleware that—no matter how many microservices we're going to have—it is going to behave in a consistent way.

We can now safely remove the code handling that from our microservices and assume that, if they're receiving a request, it's both authenticated and it passed the rate-limit checks. You now have guarantees.

However, this is just the tip of the iceberg.

The benefits of an API Gateway do not stop here. In this example, we've shown how it can make some checks on inbound requests, but it can also be used to modify the outbound responses.

In the initial part of the article, we were talking about the uniform API. An API Gateway could transform the response coming from a particular microservice so that the returned payload is consistent with the other microservices, even though the original data is shaped in a different way. Hopefully, we will explore this in a future article.

In the meantime, you can see some other interesting use cases on Express Gateway website.