At some point, we've all felt it — that sweaty moment when you're certain everyone is going to figure out that we can't really do whatever it is we said we could do: we're impostors. But to rise to the level of impostor syndrome, that feeling has to happen more often than feeling confident. Ironically, the syndrome seems to strike some of the most capable and talented.

Here at Auth0, we've been talking about why impostor syndrome is so prevalent in the tech industry and how various people have worked through it. Discussions ended up revealing that some of our most seemingly confident colleagues have contended with impostor syndrome. We asked them to share their strategies. 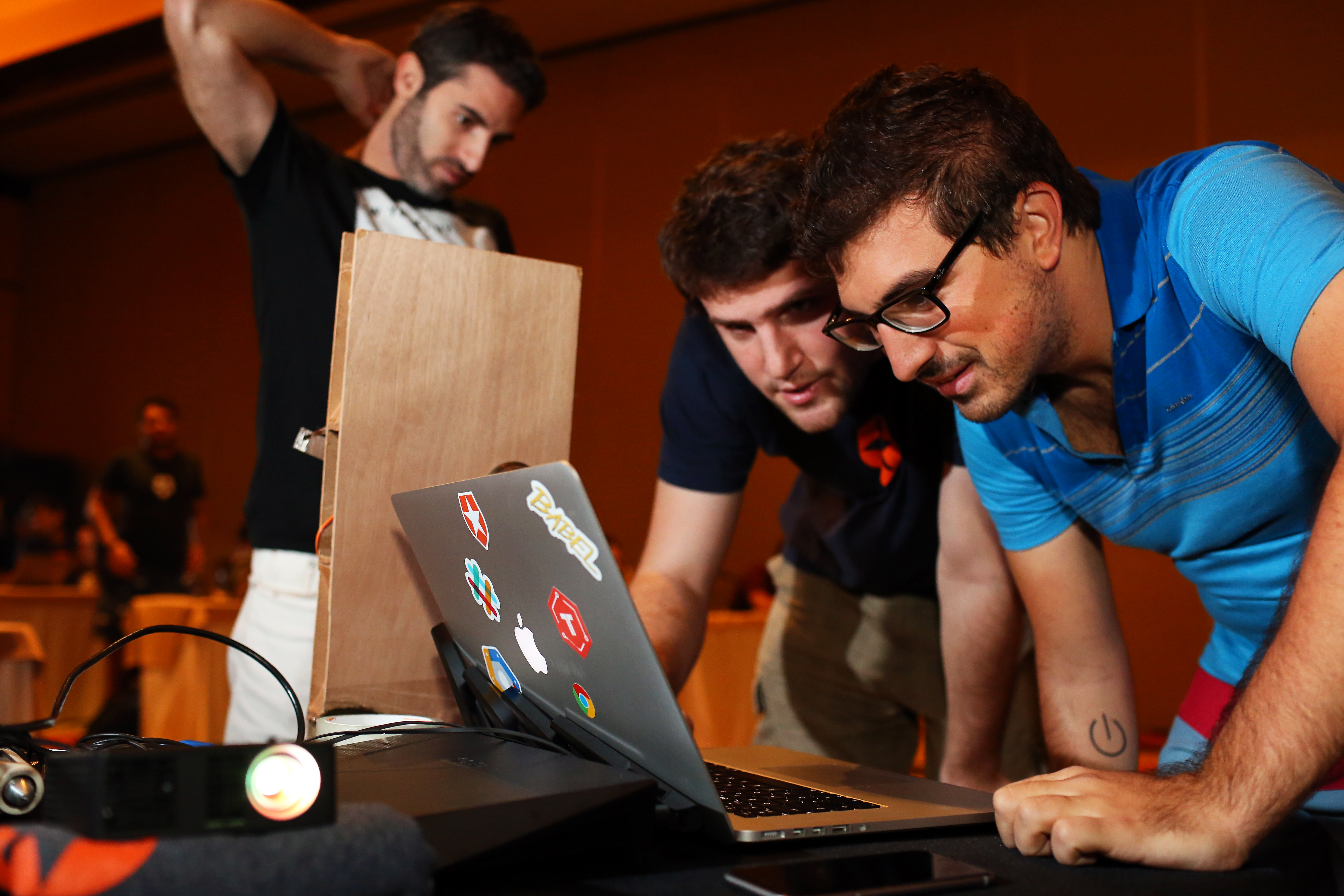 If you've seen Gonto energetically taking a conference stage, then connecting with people in the halls after he's wowed the audience, you'd be stunned to learn that this guy still suffers from impostor syndrome. His brash, warm style suggests that he's always been great at thinking on his feet and conveying his enthusiasm to others.

But the same ability that makes him a fast thinker in all situations worked against him when it came to feeling he'd earned his success (VP of Marketing by 27). "To me, impostor syndrome is feeling that you got to wherever you are by luck and external forces instead of by your own efforts," says Gonto. "What I really don't like about it is that you question your own thoughts: Do I have enough experience? Is it right? Is it correct?"

Meditation as a Way to 'Discard' Unwanted Thoughts

Gonto says he's worked hard on his "obsessive" need for control in his personal and professional life, turning to a psychologist for help because he found himself unable to accept compliments even when his grades and athletic achievements visibly demonstrated his skill.

"I'm a very rational being, but I can still kill ideas with fear," says Gonto.

To get a handle on his rapid-fire thinking, Gonto turned to meditation. "Meditation is a form of training that allows me to become conscious of my thoughts at a certain point in time and order my brain to do something. Let's say I get this random thought of insecurity. I can 'be there,' consider the thought as just insecurity and therefore discard it by focusing on my body. Maybe I wasn't aware of being insecure or didn't know why when I first felt it. Meditation helps me get the why if I want it, or if I prefer, it helps me discard anxious, insecure thoughts."

One of Gonto's more daunting recommendations is creating 'vulnerability-based trust' with your team members. As a late-stage startup, Auth0 requires a team that can make rapid decisions together and that means being able to trust your team when you speak bluntly — and when you need them to call you on your crap, says Gonto.

But encouraging people to test you with hard questions understandably sets off some insecurity bells for people. If you're one of those people, Gonto says that creating more trust can be the answer. That means sharing something that makes you feel vulnerable — maybe a concern or a hesitation about a work situation or something personal — sharing more will create the empathy that will create the trust. The goal is to get to where anyone can ask the questions needed — people have to be able to think out loud together.

Recently Auth0 revamped our landing pages, but Gonto disagreed with the direction supported by two other managers. He felt a bit insecure about sharing his point of view, but credits meditation and the environment of trust he's created with his colleagues in helping him set aside the insecurity so he could share his opinion. Because he took that risk, they were able to come to a mutually acceptable agreement.

As uncomfortable as impostor syndrome can be, it might not always be a bad thing, says Gonto. "A lot of times this feeling of being an impostor happens just as you're taking on a new challenge or stretching into a new role. When I think about successful folks like Sheryl Sandberg, Natalie Portman, and Howard Schultz who have said they have impostor syndrome, it makes me wonder if maybe there's something about it that can give you an extra edge."

Despite the discomfort of impostor syndrome, Gonto sees benefits in how he's become obsessed with how the mind works, which has helped him better understand other people, leading him to be a better manager. "Unconsciously I see life as chess with 1,000 possibilities. Sometimes overthinking helps," he says, "and sometimes it doesn't."

How Staying With the Feeling Makes It Go Away

Ultimately, Gonto relies on the power of the mind to convince him of both the negative and the positive. "We do things because of our beliefs. I convinced myself (and therefore installed a new belief in my brain) that I will only grow and learn new things when something makes me feel scared and uncomfortable."

After having a bad moment following mistakenly saying something he knew he shouldn't have, Gonto says he kept the bad moment going by arguing in his head. He wasn't able to release the feeling until he allowed himself to fully feel it and accept it. "Things happen. We can't change them. Staying with the feeling that the event created and knowing that the feeling will go away and isn't forever is what makes it go away faster. If we fight against our feelings, we make them 'stay' for longer"

Even for an obsessive thinker, dealing with the constant flow of thoughts can be too much. "I think you need to find time to reflect. You need to find time in your week to think and write. What I do is survey the people around me: How do you think? What do you do for thinking? This gives me new ideas on how to approach life and work" Finding time to reflect on the information gathered allowed Gonto to change beliefs he's been holding onto since he was a kid:

"People are afraid of talking about impostor syndrome, their psychologist, or meditation because they think it's not ok to look for help (inward or outside). You always have to be yourself. Don't be afraid of who you are — it just gives you more insecurities. We are best when we are ourselves. It's all about being genuine and accepting ourselves, our thoughts, and our emotions as they are" 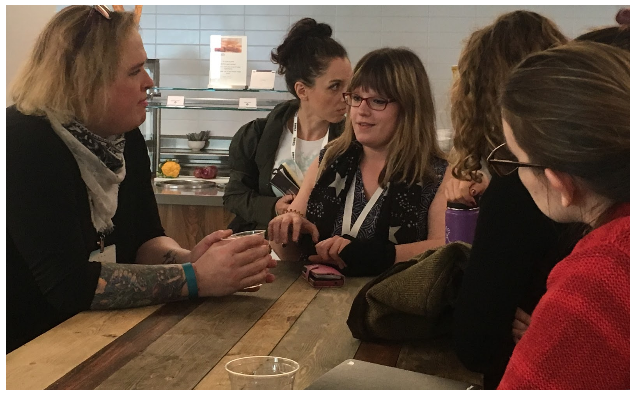 Joan manages to command a conversation and inspire empathy and loyalty in the same breath. She speaks directly and clearly on complex topics without skimping on intellectual or emotional reactions and regularly inspires with her belief that leadership is a skill that can be learned. Joan says she's contended with impostor syndrome, but has since cured herself. She shared her method in an interview with Auth0 Community & Technical Content Manager Kim Maida and during a recent On Wednesdays We Wear Leadership (OWWL) meeting.

OWWL is an Auth0 group dedicated to developing leadership skills that meets monthly and shares insights via an internal Slack channel.

Known for her systematic method of problem solving, it's no surprise that Joan applied a similar approach after recognizing her primary symptom — not feeling "expert" enough to handle the challenge she'd taken on.

As a first step of defining the problem of why she was feeling this way, Joan started thinking about what made someone an expert and she reached an intriguing conclusion: "Impostor syndrome is interesting because there's this belief people have that out there in the world — "expertise exists — and I don't believe that's true. Who is the actual authority on X, Y, Z? There are increasingly informed opinions. Someone with a PhD in biology offers an informed opinion, but that doesn't mean they know everything."

While working on this line of thought, Joan realized that there are relatively few bodies of experts with the authority to hand down edicts. In fact, she came up with only one — the Académie française, a council imbued with the power to decide whether or not a word may officially enter the French language by the government of France.

The idea that there are only a few experts and everyone else is working with "varying degrees of opinion and experience" fascinated Joan. "This hit me: I don't fully know, but I have the ability to keep figuring it out. And if I don't know what I'm doing, I don't think anybody does."

{% include tweetquote.html quotetext="“This hit me: I don’t fully know, but I have the ability to keep figuring it out. And if I don’t know what I’m doing, I don’t think anybody does.” @auth0’s @CloudCISO_Joan on her impostor syndrome breakthrough."%}

As a next step in addressing something that makes you feel like an impostor (such as a talk, presentation, or job opportunity), Joan recommends a gap analysis, where you objectively compare your skills to the perceived "experts."

The thing about impostor syndrome is that it will break down under intellectual pressure, says Joan.

Even if you've felt like an impostor yourself, the temptation to tell someone else who looks more confident and more capable that they're "awesome" when they're feeling insecure can be strong — except it doesn't honor their lived experience. Instead, you can provide more help by supporting their skills. Letting them know that you have confidence that they'll figure it out can help. During the conversation, you might try the following:

{% include tweetquote.html quotetext="Impostor syndrome isn’t a leadership barrier. @auth0’s @mgonto and @CloudCISO_Joan share strategies to increase comfort as you broad"%}

Breaking Down the Types: Talking about impostor syndrome can be challenging. This Fast Company post breaks it down into 5 types that can make it easier to identify your personal impostor challenge and come up with strategies that might work best for you.

Alternative Strategies: Maybe you tried some of the things in this article and they just didn't work for you. Does that mean you're stuck feeling like a fake? No. There are definitely more approaches to try. Our Human Resources Director, Maris Krieger, suggests you explore these 21 strategies.