Auth0 Actions offer many advantages over Rules. If you are using Rules to customize your Auth0 integration experience, you should consider migrating to Actions. Learn how to plan and implement this migration.

One of Auth0's strengths is its focus on extensibility, i.e., the ability for the user to customize the standard behavior of Auth0's identity solutions. Auth0 Rules was the first tool that enabled users to run custom code to extend Auth0 authentication. Rules are serverless code blocks executed right after successful authentication but before tokens are issued.

To satisfy the widest range of extensibility needs, Auth0 has constantly worked on improving this tool. Recently, it consolidated the acquired experience on customization and provided developers with Auth0 Actions, a solid environment for most code-based customization needs.

Auth0 Actions offer a lot of benefits over Rules. So, if you are about to start your customization, Actions are the recommended tool. On the other hand, if you have already implemented your customization through Rules, you are strongly encouraged to migrate to Actions. Let's look at a few advantages you can get by switching to Actions:

Read this blog post for a quick introduction to Auth0 Actions.

You can use Actions to replace your Rules, but be aware of some limitations:

Take a look at the full list of limitations of the current implementation.

With these caveats in mind, let's take a look at how you can convert your Rule into an Auth0 Action.

When migrating from Rules to Actions, a developer may also want to consider a no-code Integration - including Actions Integrations - from the Auth0 Marketplace. These Partner-built integrations solve common identity use cases such as consent management, progressive profiling, and user verification, enabling developers to go-to-market faster while reducing development and maintenance costs associated with custom code.

Auth0 Rules allow you to customize the authentication flow. That means you can convert a Rule into an Auth0 Action handling the Post Login trigger of the Login Flow.

This article will not guide you step-by-step through creating an action or migrating a rule. It assumes that you have a basic understanding of how to create a Rule and how to create an Action. If not, please refer to Auth0 documentation about Rules creation and Actions writing. In both cases, you need an Auth0 account. If you don't have it, you can get one for free. 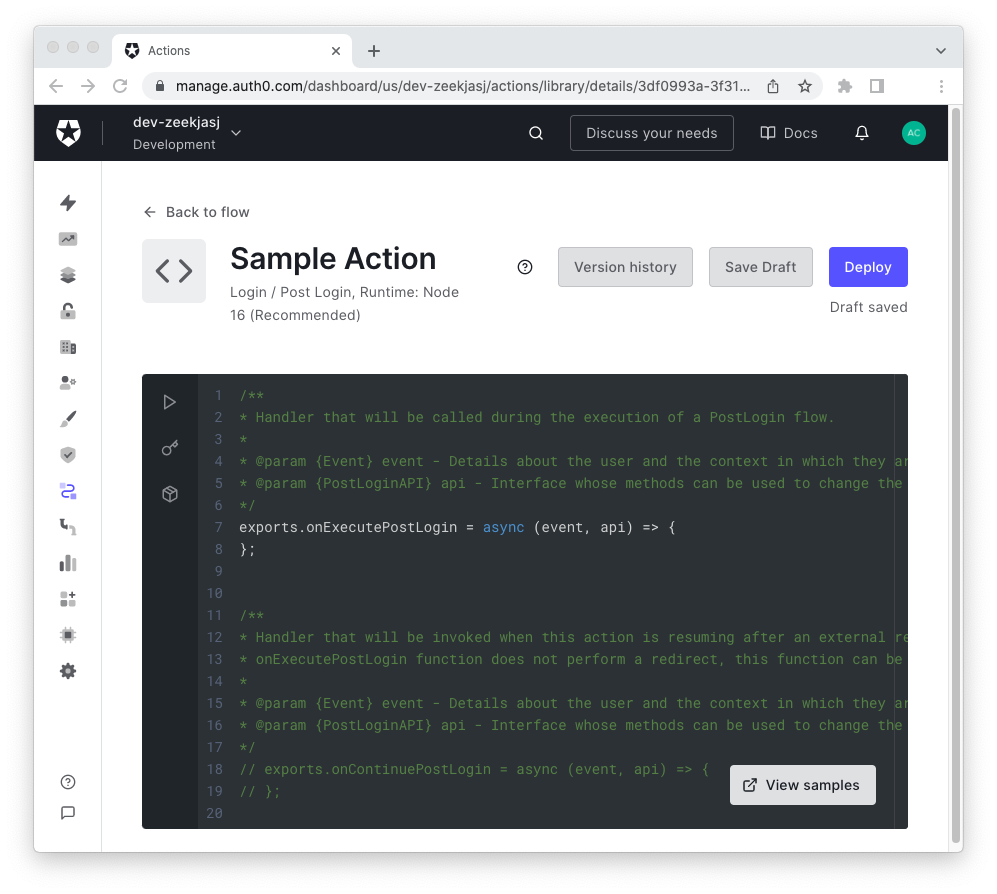 This is not just a matter of copy and paste. You need to apply some changes to make the conversion effective. So, let's focus on the specific changes you should apply to your Rule's code.

You can have multiple Rules handling your authentication flow. You can map these Rules to as many Actions by keeping the same order. This will ensure you keep the same functionality.

An Auth0 Rule is a JavaScript function with three parameters: user, context, and callback. The onExecutePostLogin() function implementing the Action has two parameters: event and api. Besides the different names, how can you map those parameters? How can your Action retrieve the same data from the parameters as your Rule?

Actually, the design of Actions brought you consolidation of the data passed by the running environment to the Action function. As a general rule, all read-only properties of the user and context objects in Rules have been moved to the event object in Actions. Any interaction with the running environment, like failing a login or updating user metadata, is implemented through methods of the api object.

Please refer to the documentation to learn more details about the event object and the api object.

In Rules, you get data about the current user by accessing the user object parameter. In Actions, you need to access the event.user object. Here you can find the same data as the user object except the attributes added by an external identity provider or custom database script.

To give you an example, if you have the following Rule implementation:

You can convert it into an Action implementation as follows:

In Rules, the context object stores data about the current login session. In Actions, you can find the same data in the event object.

In an Action, it will become as shown below:

As you can see, some properties of the context object have become properties of a few objects attached to the event object. For example, you have the client object, the connection object, and so on. In other words, the login session data has been refactored to be more clearly organized.

Please compare the documentation of the context object in Rules and the event object in Actions to learn more about the differences.

Auth0 Rules allow you to include dependencies to power up your code. You can leverage thousands of npm packages, but not all the packages available in the npm registry. If you need a package that is not available for Rules (or even just a specific version of an npm package), you need to request it to Auth0.

In Actions, you can add dependencies for all the available packages in the npm registry, which means over one million.

Also, unlike Rules, in Actions you don't need to specify the package version in the code. That means, for example, that in Rules you have to declare a dependency this way:

In Actions, you specify the package version just in the editor's module manager and your code looks like the following:

Notice that you import the dependency outside the function's body, more in the style of a Node.js module.

With Actions, everything is more straightforward. To pass control, simply use return. To stop the login process, call the api.access.deny() method.

This code succeeds or fails based on the value of the condition property of the app_metadata object. You can convert this code into the following Action function:

In summary, you should replace any instance of callback() in your Rule with a call to api.access.deny(), in case of failure, or with return, in case of success. You can also omit the return statement if your code runs to the end of the function's body.

Now that you have some general guidelines to convert the code of your Rules into Actions, let's take a look at some examples.

Adding custom claims to a token

One of the most common use cases for Rules is the ability to add custom claims to a token, either an ID token or an access token. For example, the following code snippet shows a Rule adding two custom claims to the ID token:

This Rule can be converted into an Action as follows:

While the Rule assigns the values directly to the context.idToken object, in the Action you have to use the api.idToken.setCustomClaim() method. Notice how the invocation of callback() disappears in the Action.

You can manage users' and applications' metadata using Rules. The following example shows how to store the font size preference in the user's metadata:

In Rules, each invocation of auth0.users.updateUserMetadata() makes an HTTP request to the Auth0 Management API. Instead, all the invocations of api.user.setUserMetadata() occurring in one or more Actions will result in a single API call at the end of the Actions execution. This contributes to mitigating the risk of rate limit errors.

When you need to redirect the user to a different page to complete the login process and then resume authentication, your Rule may look as shown below:

The conversion of this Rule into an Action becomes as follows:

You have different functions handling the redirection (onExecutePostLogin()) and the response (onContinuePostLogin()). Also, the burden to check if the current protocol is eligible for a user redirect is assigned to the api.redirect.canRedirect() method. Also, notice that Actions use the api.redirect.sendUserTo() method to redirect users instead of the context.redirect object.

To learn more about user redirect with Actions, check out the documentation.

At this point, you should have a clearer understanding of the main differences between the code used in Rules and Actions. However, knowing how to translate a Rule into an Action is not the only thing you should care about. You also need to plan a strategy to migrate your code from Rules to Actions in order to avoid issues in the production environment.

Check out the documentation for guidelines to define your Rules to Actions migration strategy.

This article gave you the foundations to set up your migration process from Auth0 Rules to Actions. You learned the main reasons to migrate and the basic differences between coding for Rules and coding for Actions.