TL;DR: In this article, you will see how to build and deploy a serverless Django API with Zappa.

Serverless technology was developed from the idea of allowing developers to build and run applications without server management. Servers, of course, still exist, but developers and administrators don't need to manage them. This concept was heralded by AWS when it open-sourced its Serverless Application Model (SAM) framework. It then went on to release Chalice, a flask-like Python framework for building serverless applications. You can learn about building Chalice applications and APIs in this article.

With all the goodness that we are presented with, deploying serverless applications can be difficult when using frameworks like Django. Debugging in production environments can be hard too. Hence, there is a need for a way to deploy painlessly and also provide a means to debug and also monitor logs in production.

Zappa is an open-source Python tool created by Rich Jones of Gun.io for developers to create, deploy and manage serverless Python software on API Gateway and AWS Lambda infrastructure. Zappa allows you to carry out deployment with speed and ease in the most cost-efficient way possible.

In this article, you will learn how to develop serverless Django RESTful APIs, use Zappa to deploy them to AWS, and add authentication with Auth0.

Features and Benefits of Zappa

Some of the benefits provided by Zappa include:

To use Zappa for your Django projects, ensure you have met the following prerequisites:

If you don't have any of the specified Python versions installed, you can download Python here. You can use Venv, Virtualenv, or Pyenv to create virtual environments. If you do not have an AWS account yet, you can sign up for free. You may follow these instructions to configure your AWS credentials.

Companies need an employee management system to keep details about each employee. It could be in a form of web application where new staff could be added or removed. What's more, staff details should also be presented.

Hence, in this section, you will create an API that could do the following actions:

The endpoints could then be as follows:

Create a folder where the files of this project will reside. Name it django_zappa or any other name. Also, navigate to the new folder:

Create a new virtual environment and activate it:

Use pip to install the needed dependencies on the CLI as shown below:

We used the Pip package manager that comes pre-installed with Python to install the following packages:

Then, create a new app called api inside the company parent directory. This app will contain the API code:

Next, open the settings.py file of the Django project and add rest_framework and api to the list of installed apps.

Here, you will create a model for employee API that will determine which employee details will be saved in the database. Go to the models.py file inside the api application directory and add the following code:

Next, you need to create migrations to seed the model into the database:

Then, you will create a serializer that will allow Django views to return an appropriate response to the users' requests. Create a new serializers.py file in the api directory and add the following code:

You need to make views that will handle the logic of the HTTP actions when users make requests to the API endpoints. The views will also interact with models via the serializer.

Go to the views.py file of the api directory and add the following code:

The code above has 2 views. The first one, called EmployeeList lists all employees and also allows the creation of a new employee. The other view, EmployeeDetail, allows the creation, retrieve, update, and deletion of particular employees. It accepts a single model instance.

Next, create URLs for the views respectively. Navigate to the urls.py file in the project sub-directory and add the following code:

In the code above, you added paths to the two views created earlier. The URLs were also defined as api/employees/ and api/employees/{id} respectively. The second URL accepts the id as an integer parameter, which is a primary key, int:pk. This is for the single model instance to be fetched when requests are made at the endpoint.

Now, the API has been successfully created. Next, Zappa will be used to deploy the API to AWS Lambda.

Use the runserver command in your terminal to start the built-in Django server so you can access the API in your browser.

Navigate to127.0.0.1:8000 in your browser. You should see a page that shows a list of accessible endpoints like this:

If you navigate to api/employees endpoint at 127.0.0.1:8000/api/employees, you will see the Django REST framework browsable API: 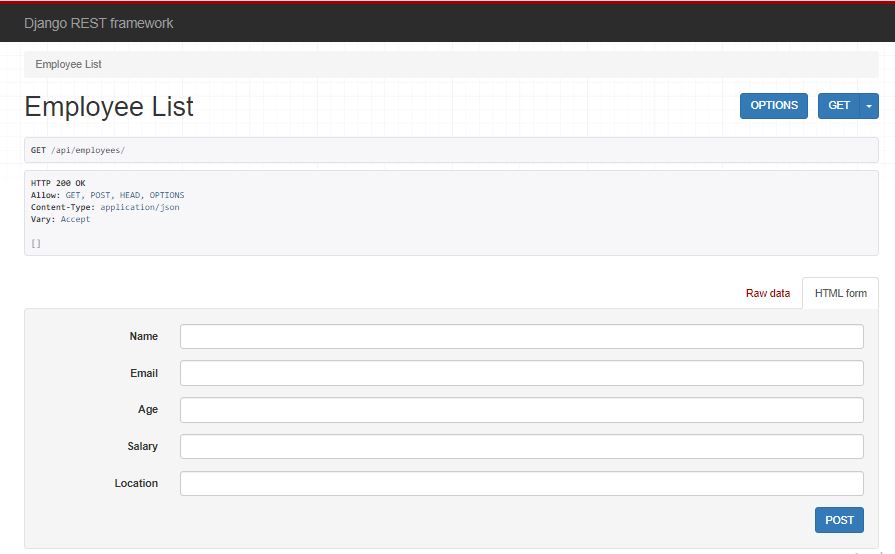 You have confirmed that the API works well in your local environment.

Before you deploy the Django API with Zappa, you have to initialize Zappa in the project:

When you ran zappa init, you should get a command-line output that looks like the following:

Follow the prompts to name your staging environment and private S3 bucket where the project files will be stored.

By the end of the prompts, you should get an output like this:

The zappa_settings.json file is crucial for your deployment because it contains the deployment settings.

The zappa_settings.json file may, however, contain the information for other regions if you choose global deployment while initializing Zappa.

You will deploy your project with the zappa deploy command where stage-name could be dev or any other stage name you use when initializing Zappa:

Upon successful deployment, you should get a URL where you can access your API on the internet. It should look like this:

Copy the URL generated for your application and add it to the list of ALLOWED_HOSTS inside the settings.py file of the project:

Then, update the deployment:

Keep in mind that you need to update the deployment with the command above when making any changes in your project.

At this point, you may need to serve static files so that default Django styles can be active in the deployed stage.

Note that you can't change a bucket name after creating it.

Go to the Permissions tab of your S3 bucket and navigate to the Cross-Origin resource sharing (CORS) section. Click the Edit button and add the following configuration:

Install django-s3-storage library for Django to work with S3:

Next, open the settings.py file and add the following:

Now, update the deployment with the static files.

The browsable API should render with its styles appropriately like below:

Click the Create API button on your Auth0 dashboard to create an API. Then, go to the Permissions tab of the newly created API to allow read access.

Next, open the settings.py file of the project and add the ModelBackend and the RemoteUserBackend to the list of Authentication backends.

Next, update the middleware in the settings.py file as thus:

Next, navigate to the api application directory and create a new file called utils.py. Then, add the following:

In the code above, we have defined settings for permissions, i.e., what can be accessed after authentication. We also defined the type of authentication that we want as JWT.

Next, set the JWT_AUTH variable for the JWT authentication library in Django.

Next, navigate to the utils.py file and add a function to get the JSON Web Token Key Sets (JWKS) from your dashboard to verify and decode Access Tokens.

Next, create two methods in the views.py file of the api application to check the scopes granted from the access_token:

In the code above, the get_token_auth_header method gets the Access token from the authorization header while the requires_scope checks if the Access Token obtained contains the scope required to allow access to some specific parts of the application.

Let us have your suggestions and questions in the comments section below. Thanks. 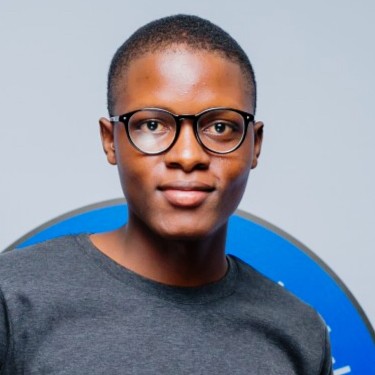 I love to deal in the intersection of software, hardware, and human interaction. My strength lies in the seamless combination of my top skills - design, software development, and strategic management.
View Profile

I love to deal in the intersection of software, hardware, and human interaction. My strength lies in the seamless combination of my top skills - design, software development, and strategic management.
View Profile