TL;DR: Take a look at the new features available in NET Core 3.0. This post will provide you with an overview of the latest release of the well-known Microsoft development platform.

".NET Core 3.0 is out! Discover the new features provided by the framework."

.NET Core 3.0 and the .NET Unification

After more than 12 years from its first release, .NET has reached a crucial point in the ecosystem transformation announced last May: the .NET platform unification into .NET 5. This crucial point is represented by the release of .NET Core 3.0 launched these days at .NET Conf.

In recent years, continuous innovation and the desire to bring .NET to platforms other than Windows has created fragmentation in the ecosystem. Developers had to deal with different targets, such as .NET Framework, .NET Core, Mono and so on. The .NET Standard should have put the house in order, but maybe it risked complicating things. The .NET unification aims to simplify the .NET development independently from the target system.

The preliminary efforts for this unification converge in the .NET Core 3.0 release bringing interesting new features and improvements. The new release also implements the latest .NET Standard 2.1 specifications. Far from covering all the new stuff, in this article, you will take a look at the most relevant of them.

A few features of the new release aim to simplify application packaging and delivery.

For example, you can build a single-file executable containing all the dependencies required to run your application in a specific platform. This can be accomplished by using the PublishSingleFile flag with the dotnet publish command, as shown in the following example:

This command will create a single file package for your Windows 10 application.

Alternatively, you can edit your project file by adding the PublishSingleFile element, as follows:

In addition, .NET Core now creates smaller executables by building framework-dependent executables by default. This means that dotnet build and dotnet publish commands create an executable that matches the platform of the .NET Core SDK you are using, avoiding to include .NET Core itself.

Some improvements relate to performance. In addition to some internal code optimization, now the tiered compilation is active by default. This feature helps the Just-In-Time (JIT) compiler get better performance by adapting the generation of optimized code to the various stages of the execution of an application. For example, at startup, you can tolerate the generation of a non-optimized code since you are giving priority to the application responsiveness.

By the way, you can also improve the startup time of your application by compiling it in the ReadyToRun (R2R) format. Binaries built in this format reduce the amount of work of the JIT compiler, but they are larger. If you want to take advantage of it, you need to add the PublishReadyToRun key to your project configuration:

Then, you need to publish your application as a self-contained app. You can do this by running the dotnet publish command with the --self-contained flag, as shown in the following example:

One of the most awaited features of .NET Core 3.0 is the latest version of C#. In addition to some internal improvements to the compiler, C# 8 brings a few interesting new features to the language.

Switch expressions are a very convenient way to map information in a compact fashion. Take a look at the following code:

It defines the Calculate() method that performs the four arithmetic operations based on the given arguments. In particular, the operation string is analyzed through a switch statement in order to detect the operation to perform.

You can rewrite this method in a more compact way as shown in the following code:

As you can see, the switch keyword acts as an operator between the variable to check (operation in the example) and the map of expressions to evaluate. The resulting code is much more readable since you are now able to catch at a glance which expression matches the operation.

One of the most common causes of bug is the null reference exception, due to the attempt to access a null value while you expect a non-null value. This type of exception comes out from the lack of a clear declaration of the developer intent. In other words, if you declare a variable without initializing it, like in the following example, its default value in C# before version 8 is null:

If you want your variable have null values, you must explicitly declare it as a nullable reference type by appending the well-known ? at the type name, as shown below:

This change will have an impact on your existing code, even if just in helping you to easily find potential bugs. You can read this tutorial in order to migrate your application to the nullable reference type system.

This feature allows you to define a default implementation for a member of an interface. To understand how it works, consider the following example of an interface definition:

This code defines a very simple interface for a typical logger. You can define your own implementation with the following code:

Your ConsoleLogger class will inherit the default implementation for the LogError() method.

Asynchronous streams, also called async streams, allow you to create and consume data streams that may be retrieved or generated asynchronously. .NET Core 3.0 implements some new interfaces introduced in .NET Standard 2.1 in order to support this type of stream. C# 8 allows you to leverage them by using the new IAsyncEnumerable<T> type in combination with the async modifier, the await keyword, and the yield return statement.

To take a very quick look at the async streams feature, consider the following snippet of code:

The GetRelevantDataAsync() method defines an asynchronous stream. It generates a random integer every 100 milliseconds but returns only numbers greater than 75.

The following code consumes the asynchronous stream generated by the GetRelevantDataAsync() method:

Note the await foreach statement. It allows you to enumerate the asynchronous sequence of integers.

Other interesting features also come with C# 8. See this document to learn more.

Along with some clean-up and updates of various templates, ASP.NET Core comes with a few new features that developers should be aware of. Here are some of them.

These extension methods should be used inside the ConfigureService() method of the Startup class of a ASP.NET application, as shown in the following example:

In order to improve the endpoint routing process, it has been decoupled from the MVC middleware. Now you should use the UseEndpoints() method of the application instance instead of the UseMvc() method. The following is an example that uses it in the body of the Configure() method of the Startup class:

In this case, you assume that your application is just implementing a Web API and you map its controllers by using the MapControllers() method. If you are using Razor Pages, then you should use the MapRazorPages() method.

Blazor, the Web UI framework you can use to create Web pages with ASP.NET, has some new features:

Of course, these are just a few of the new features that have been added to Blazor.

Many other features regarding ASP.NET Core are available with the new release. It would be impossible to talk about all them here, but the following should be at least mentioned:

In fact, the new release brings Windows Forms (WinForms) and Windows Presentation Foundation (WPF) to .NET Core. In addition, you will be able to include Universal Windows Platform (UWP) controls to your WPF and WinForms applications by using the so-called XAML Islands. 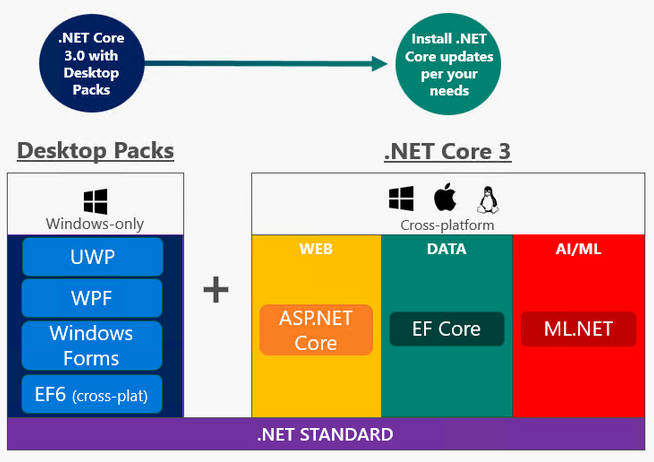 You will have new .NET Core project templates in Visual Studio and will be able to create a new Windows Forms and WPF project via the dotnet command as shown in the following example:

".NET Core 3.0 allows you to run new and existing Windows desktop applications using the UI framework of your choice"

This new release of .NET Core no longer relies on Json.NET to serialize and deserialize JSON data. A new JSON serialization library has been introduced in the System.Text.Json namespace. The built-in library offers high performance and low memory footprint and is the default library for the project templates involving JSON manipulation, such as the ASP.NET Core templates.

By way of example, the following code serializes an anonymous object by using the Serialize() method of JsonSerializer class:

Support for HTTP/2 has been added to the HttpClient class. The default protocol remains HTTP/1.1, but you can enable HTTP/2 in two ways: at the HttpClient instance level or at the HTTP request level.

For example, the following code creates an HttpClient instance using HTTP/2 as its default protocol:

On the other hand, the following example shows how to make a single request using the HTTP/2 protocol:

Remember that HTTP/2 needs to be supported by both the server and the client. If either party doesn't support HTTP/2, both will use HTTP/1.1.

Aside: Securing ASP.NET Core 3.0 with Auth0

On ASP.NET Core 3.0, you need to create an API in your Auth0 Management Dashboard and change two things on your code. To create an API, you need to sign up for a free Auth0 account. After that, you need to go to the API section of the dashboard and click on "Create API". On the dialog shown, you can set the Name of our API as "Books", the Identifier as "http://books.mycompany.com", and leave the Signing Algorithm as "RS256". 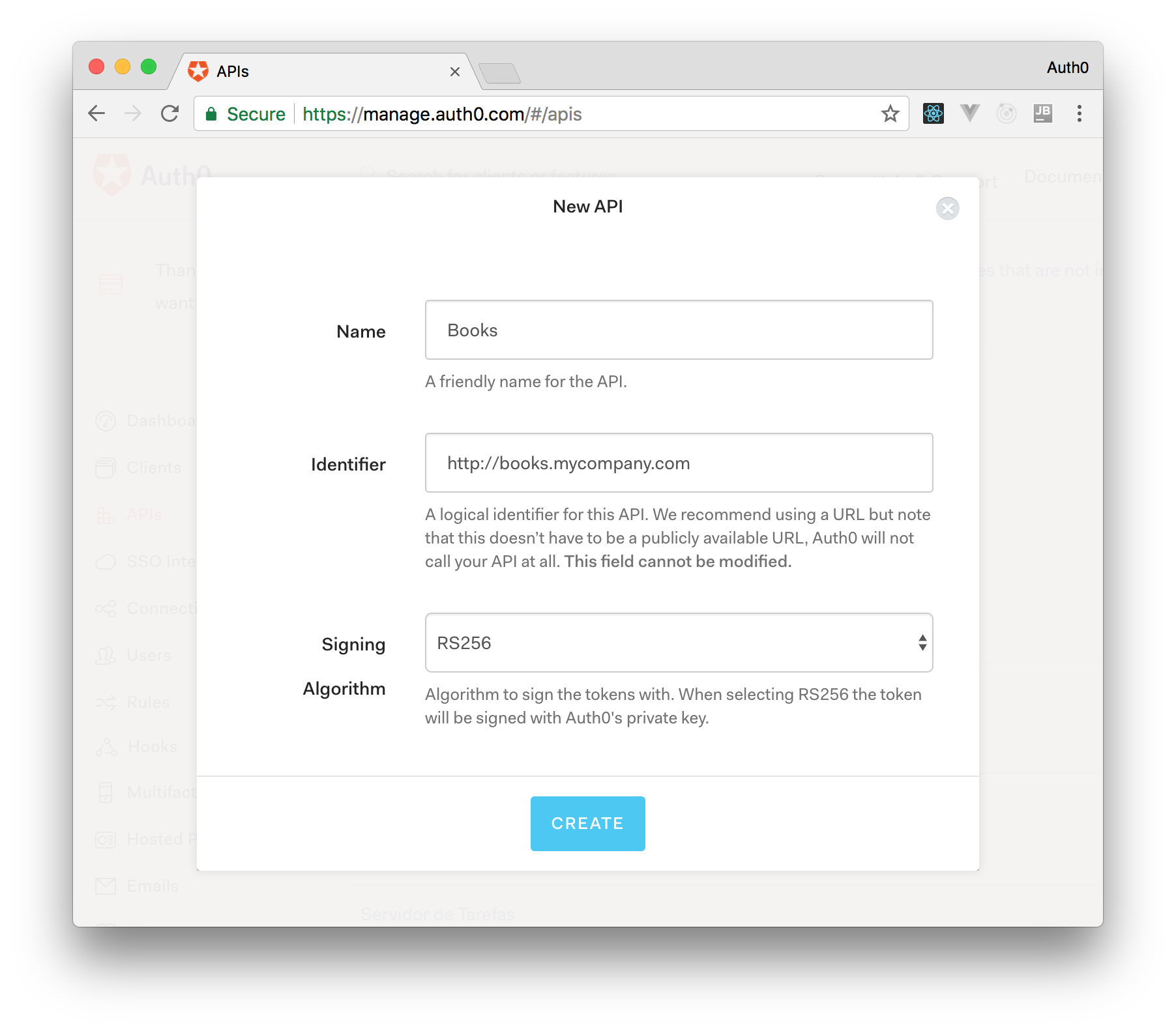 After that, you have to add the call to services.AddAuthentication in the ConfigureServices method of Startup:

You also need to add an invocation to app.UseAuthentication() in the body of Configure() method of Startup.

And add the following element to appsettings.json:

Note that the domain, in this case, has to be changed to the domain that you specified when creating your Auth0 account.

In this article, you explored some of the new features of .NET Core 3.0. You read about application packaging and performance improvements provided by the platform and discovered switch expressions, asynchronous streams, and some other new features brought by C# 8.

You also learned how ASP.NET Core is going to replace some of the functionalities of ASP.NET MVC and which improvements are available in Blazor. You read about the new support of Windows Forms and WPF to port Windows desktop applications and peeked into other interesting new features.

Of course, it was impossible to cover all the new features of .NET Core 3.0 in one article, but the ones you discovered here give you an idea of what is going on in the .NET Core evolution.