TL;DR: Angular is an all-encompassing JavaScript framework that is frequently used by developers all over the world for building web, desktop, and mobile applications. In this article, I'll cover the new features in Angular 5 and several other changes and deprecations.

Angular is built and maintained by Google.. It is a platform that combines declarative templates, dependency injection, end to end tooling, and integrated best practices to solve development challenges. Web platforms such as Google Adwords, Google Fiber, Adsense, and Winc use Angular to build their user interfaces.

Angular 5 was announced to the world on November 1, 2017. The previous Angular version was 4.4.0. This release focused on making Angular smaller and faster to use. Let's go through the major changes in version 5.

In Angular 5, you can now give multiple names to your components and directives while exporting. Exporting a component with multiple names can help your users migrate without breaking changes.

"Exporting a component with multiple names can help your users migrate without breaking changes."

Angular 5 ships with new number, date, and currency pipes that increase standardization across browsers and eliminate the need for i18n polyfills. The pipes rely on the CLDR to provide extensive locale support and configurations for any locales you want to support. To use the old pipes, you will have to import the DeprecatedI18NPipesModule after the CommonModule.

Angular 5 now supports expression lowering in decorators for lambdas, and the value of useValue, useFactory, and data in object literals. Furthermore, a lambda can be used instead of a named function like so:

"In Angular 5, production builds created with the Angular CLI will now apply the build optimizer by default."

The Angular Universal team has added Domino to the platform-server. This simply means more DOM manipulations can happen out of the box within server-side contexts.

Furthermore, two modules, ServerTransferStateModule and BrowserTransferModule have been added to Angular Universal. These modules allow you to generate information as part of your rendering with platform-server and then transfer it to the client side to avoid re-generation of the same information. In summary, it transfers state from the server which means developers do not need to make a second HTTP request once the application makes it to the client.

Angular.io was used as a case study and the compiler pipeline saved 95% of the build time when an incremental AOT build was performed on it.

Note: TypeScript transforms are a new feature introduced as part of TypeScript 2.3, that allows hooking into the standard TypeScript compilation pipeline.

In Angular 5, forms now have the ability to decide when the validity and value of a field or form are updated via on blur or on submit, instead of every input event.

In the case of Reactive forms, you can add the option like so:

In Angular 5, we have two new transition aliases, :increment and :decrement.

Animation queries now support negative limits, in which case elements are matched from the end rather than from the beginning like so:

Furthermore, you can now configure the router to reload a page when it receives a request to navigate to the same URL.

Note: Right now you will have to manually integrate the package because it's not fully integrated with the CLI v1.5 yet. It is available as beta in version 1.6 of the CLI.

The Angular team built a nifty tool to make upgrading as easy as possible. 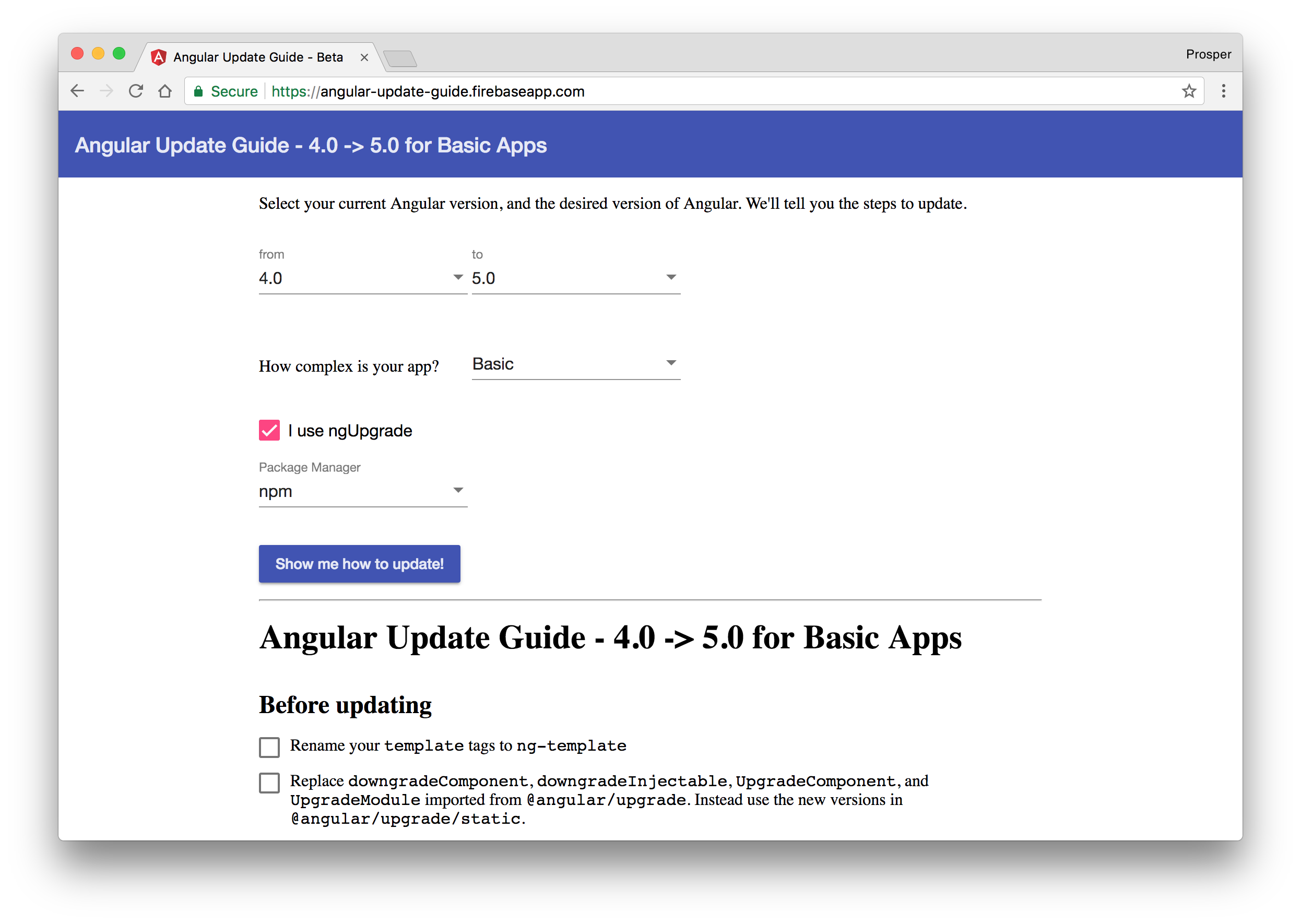 Angular 5 came loaded with new features and significant improvements. It is smaller and faster. I am proud of what the Angular team achieved with this release.

Have you switched to Angular 5 yet? What are your thoughts? Did you notice any significant improvement? Let me know in the comments section! 😊