Everyone is coping with the Coronavirus pandemic in their own ways, yet people around the world seem to share a few rituals: washing our hands, wearing masks, and of course, catching up on our Netflix queue.

With much of the world’s population stuck at home under social distancing, quarantine, and mandatory lockdowns, consumer spending on streaming has increased anywhere from 20% to 50% depending on the channel. Given this unprecedented surge in demand, it’s not hyperbolic to say the internet is going through the most intense stress test in its history.

The global desire for entertainment and escapism is creating a windfall for streaming services. Netflix, for example, more than doubled its projected number of new subscribers since the pandemic began, and Disney+ added 22 million subscribers as well. However, a combination of network slowdowns (and failures) and streaming models that don’t monetize increased traffic means that the situation for streaming media companies is more complicated than it first appears.

Media companies are facing new challenges and new opportunities and working to develop technological solutions that help them weather this historic moment.

We can see the effects of COVID-19 on streaming services by watching how currently quarantined countries (those hits hardest by the virus) have been behaving. Even without a full-blown quarantine, the rise of voluntary social distancing and enforced isolation creates at least a comparable situation.

Though China is showing signs of recovery, they implemented mass quarantine first and can give us useful data on streaming behavior. Chinese Nielsen data shows a significant rise in TV viewing, but people are also streaming less conventional content. Quarantined Chinese citizens are getting creative with streaming entertainment, streaming concerts, and setting up digital clubbing and digital gyms in their living rooms.

Italy, still in quarantine, has seen a similar rise in streaming content, with an average viewing-time increase of 11% nationally with highs of 17% in the Lombardy region. During the nationwide quarantine, the Italian telecoms giant Telecom Italian SpA has reported an overall 70% increase in internet traffic from work-from-home traffic and daytime online gaming.

The spread of the novel coronavirus is also forcing studios and streaming services to rethink how they create and distribute content, jumping release dates forward, skipping the box office, and closing down production. This will all lead to greater strain on streaming services and the larger internet.

The outbreak is closing theaters across the United States and across the world, which has been linked to a 13% rise in streaming in the US that could rise up to 60% based on prior crises. Production companies are fighting this by streaming first-run movies straight to home services: Universal released Emma and other new movies to streaming services, the new Pixar movie Onward is going right to Disney+, and huge films like Frozen 2, Birds of Prey, and The Invisible Man are coming much sooner than their prior release date.

While these first-run movies popping up on streaming services does create a large viewership base at home, it may not lead to the massive streaming profits being predicted.

It seems like a simple, logical equation: more time at home equals more streaming, which means greater profits for streaming services. But many streaming services, like Netflix, aren’t modeled to reap more profits from an increase in individual streaming time - which is why some were predicting that Netflix might not see a huge boost in profits.

“If you have to decide between food and your Netflix subscription, it seems to me like you disconnect your Netflix. You’re probably not going to add another $13 a month if you don’t know when your next paycheck’s going to come in.” — Laura Martin, the senior entertainment analyst at Needham & Company, told the Guardian.

Netflix doesn’t monetize volume. They make their money from subscriptions (and some product placement). The stock market reflects this uncertainty — Netflix has seen less than a quarter of a percent of growth in the last month.

This may be a temporary situation however: considering the shutdown of television and movie production across the board, time will tell if new subscribers will stick around for old content.

A la carte streaming services like Amazon Prime may see a boost in revenue. An Amazon Prime subscription nets users a variety of shows and movies for “free,” like Netflix, but the newest releases must be rented or purchased.

Then again, despite the rush of online ordering and their strong grip on streaming media, Amazon stock isn’t seeing much of a surge either. Though the entire stock market has taken a hit, early predictions that streaming company stock would be safe refuges may have been premature.

Meanwhile, Twitch — the most popular streaming service for gaming videos and livestreams — has seen a 10% growth in viewership as of March 18. Unlike Netflix or Amazon Prime, Twitch monetizes through ads and will likely see a commensurate rise in revenue.

But differing monetization methods don’t tell the whole story. These potential revenue boosts or profit stagnation trends are dependent on network architecture surviving the sudden swell of usage, which may not be a guarantee.

Social distancing and quarantine are closing schools and workplaces, which means a glut of people at home streaming media for entertainment, work, and educational purposes placing unprecedented strain on the internet. Some websites are even taking bets on which streaming or web service will go down next.

Microsoft Teams crashed under the increased load of remote video conferences, and YouTube and Netflix have started throttling quality on their videos in order to reduce bandwidth in the face of the surge. Hulu users reported a widespread outage on March 20, one that seemed to affect multiple devices: 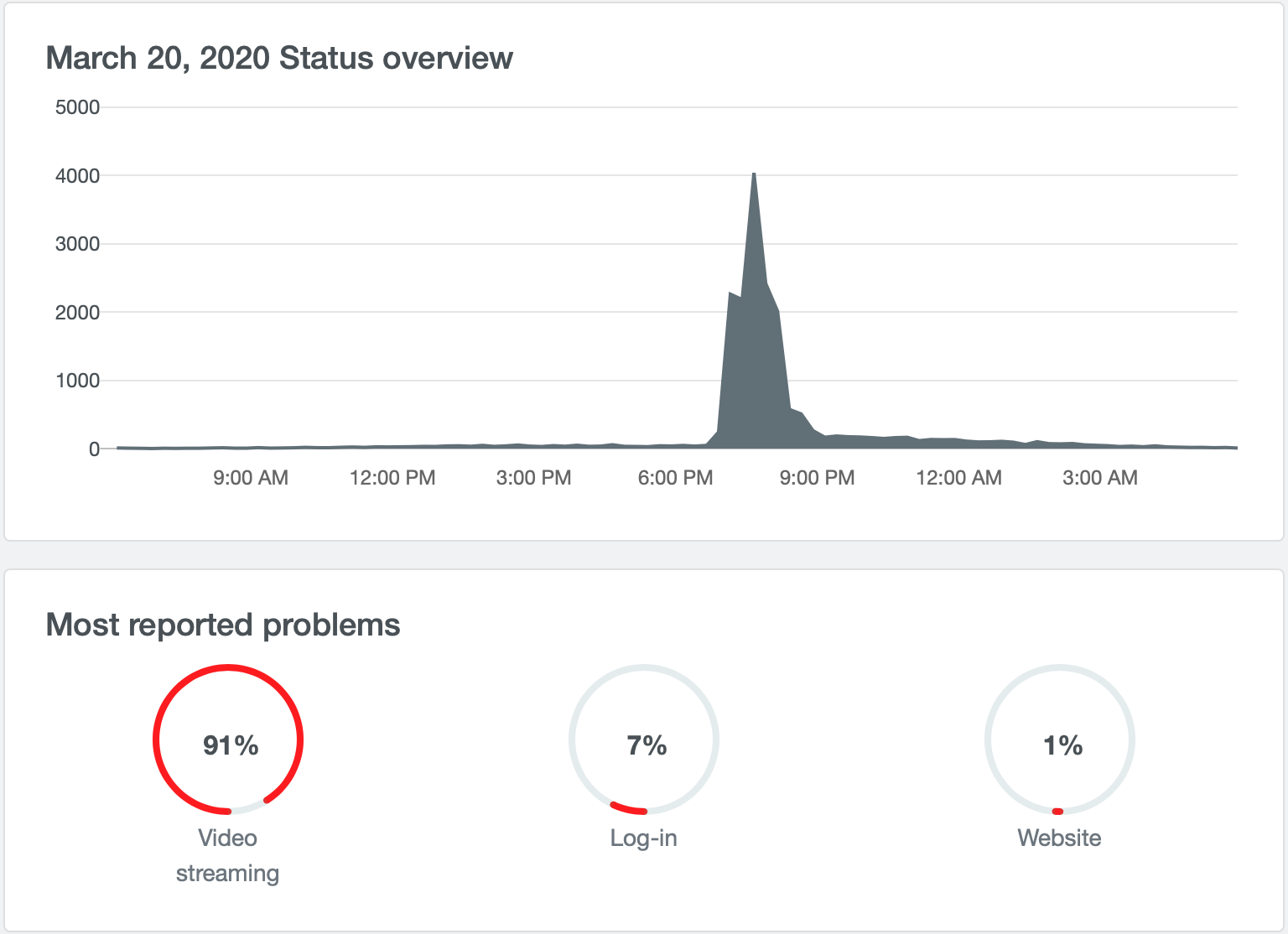 Many companies suspended their data caps and increased streaming limits in order to help people stay entertained and in contact during isolation and quarantine. However, these acts of generosity may increase the amount of simultaneous traffic online.

Streaming services may need to try new network solutions to stay ahead of this bloom of potentially network-crashing traffic.

In the face of this inflating audience and inflating screen time, streaming services using a public cloud may want to consider other options to bolster their network architecture.

There’s nothing wrong with choosing a public cloud; it’s a perfectly reasonable option for a smaller streaming service. Larger streaming services, however, can increase their bandwidth and reduce their downtime and slowdowns with a private cloud solution.

A private cloud service like Auth0 offers scalability and can provide a greater request-per-second (rps) baseline — one that can add capacity as needed. It also has enhanced uptime over a public cloud, with a guaranteed 99.99% uptime.

A private cloud doesn’t share resources or bandwidth with other companies, which is where a public cloud can sometimes struggle. Public cloud services like AWS do create server instances as needed, but they’re doing that for every business or individual using the service. COVID-19 isolation causes internet traffic to increase through every channel — streaming media, communication, education, and more — public cloud services are going to be hit from multiple angles at increasing speeds.

Getting Through This Together, Apart

The COVID-19 pandemic is a situation without precedent, creating entire nations of at-home workers, students, and entertainment-seekers all jumping on the internet at the same time. And with isolation and lockdown orders coming faster every day, this isn’t a situation likely to change in the immediate future.

Keeping streaming services going is a necessity for education, entertainment, and the economy. After a discussion with Netflix CEO Reed Hastings, the Internal Market Commissioner of Brussels, Thierry Breton, had this to say in a statement to Politico:

“We all have a joint responsibility to take steps to ensure the smooth functioning of the internet during the battle against the virus propagation.”

With scalable network solutions such as a private cloud, we can deploy and use more servers to keep everyone entertained, educated, in shape, and in contact with one another until the situation is resolved. And, hopefully, we can all get back to business — and life — as usual.