TL;DR: In this tutorial, you'll learn how to use Rails 6 and Auth0 to build an API with both authorized and open endpoints.

The ecosystem for building backend services feels more crowded than ever before. With a multitude of choices for building APIs and backend services — from Node.js frameworks and web applications to lightweight serverless functions — it's sometimes easy to overlook longstanding, tried-and-true frameworks like Ruby on Rails, which (as of 2020) is now 15 years old!

Rails sometimes gets a bad rap for not being the newest or shiniest framework out there. But Rails continues to provide sensible defaults, the ability to quickly generate scaffolding for your web apps and APIs, and constant iterative progress of new features. With Rails 6, that includes easy management of multi-environment credentials, the new Zeitwork autoloader, and many other features beyond the scope of this tutorial.

In this tutorial, you'll see how straightforward it is to spin up a new Rails API, add JSON Web Token (JWT) support to make authorized requests and secure your endpoints, and leverage Auth0 as your authentication system to verify users and access tokens. The API you'll build is a simple one: you'll create an endpoint for reading, creating, and deleting short messages called Chirps — think of it as your own private Twitter API.

"With Rails 6 and Auth0, it's straightforward to spin up an API and secure your endpoints."

You can find all code from this tutorial in this GitHub repository.

Read on to get started!

Before you jump into code, you'll need to create a new Auth0 API. Head to the API section of your Auth0 dashboard and click the orange "Create API" button. Fill out the form with the following values: 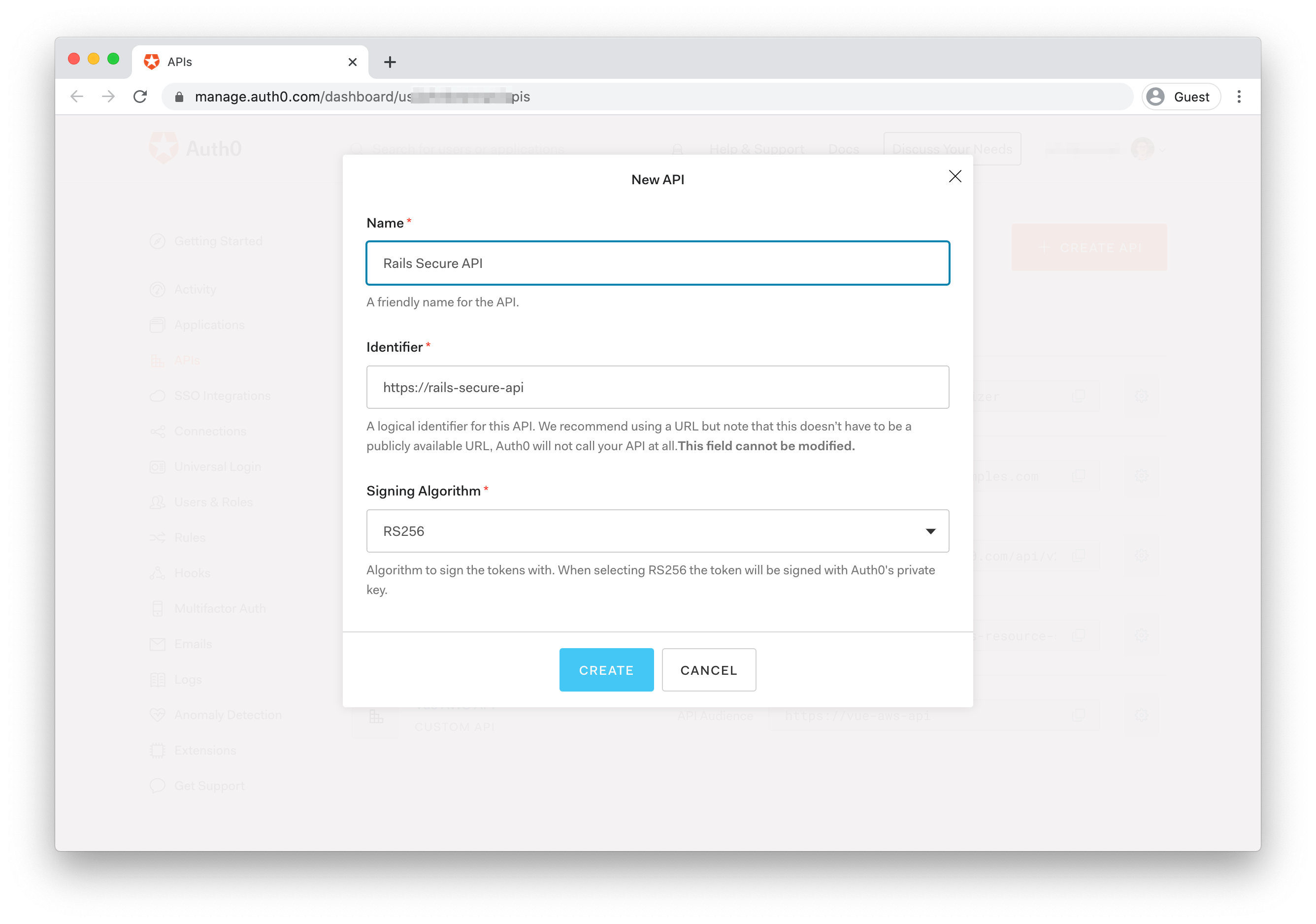 Copy the identifier value (https://rails-secure-api) — you'll need it when setting up your Rails app. You'll also need to grab your Auth0 Domain. Unless you're using a custom domain, this value will be [TENANT_NAME].auth0.com. If you're unsure what this value is, open the "Test" tab in your API's settings and look at the url argument in the code sample under "Asking Auth0 for tokens from my application": 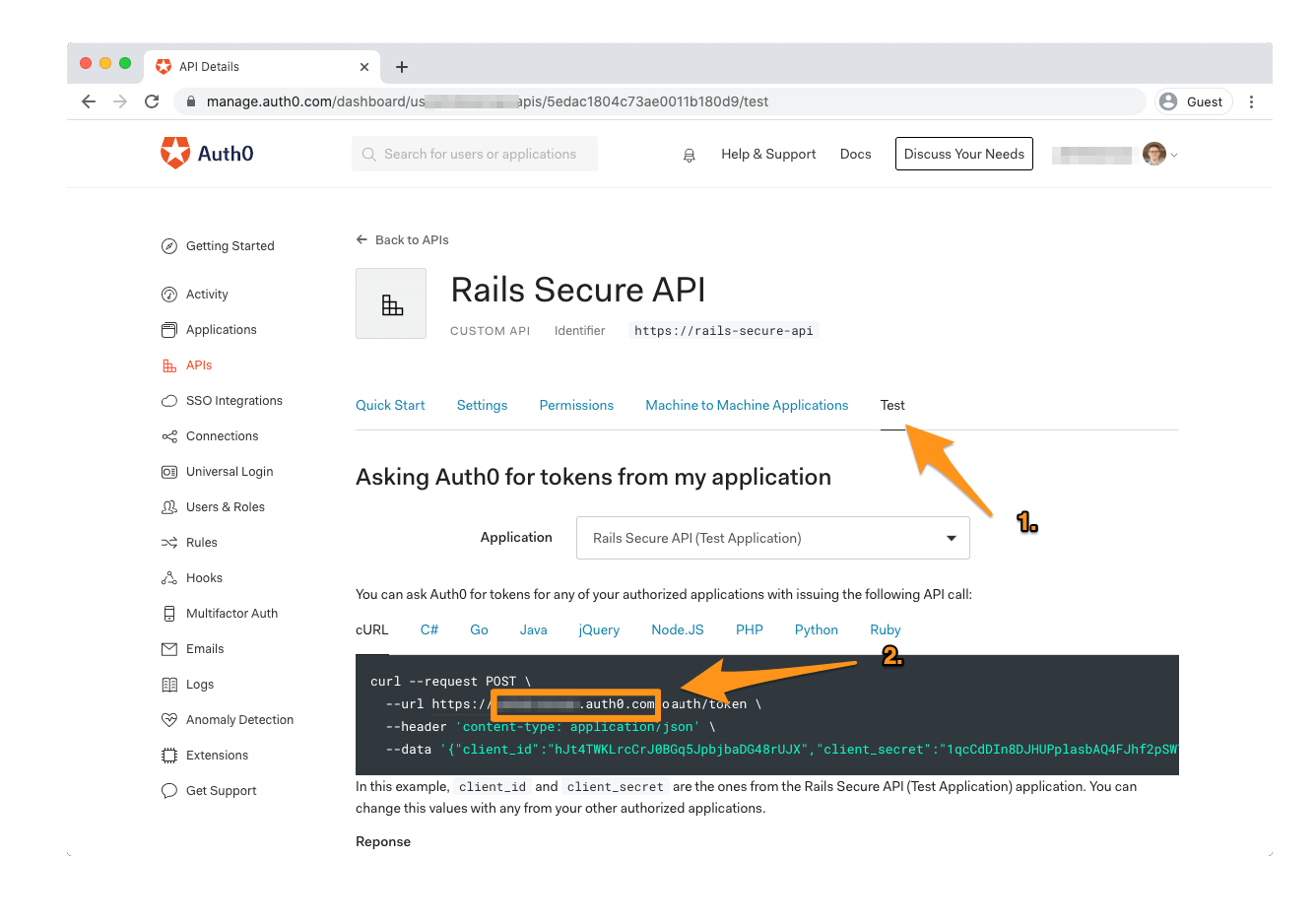 Once you've finished creating your API, you can head to the command line and start building your Rails application!

The most straightforward way to generate a new Rails app is by using the CLI. Run the following command in your terminal:

Once the Rails CLI finishes, you'll have a fully operational Rails application ready to go. To ensure this, run the following in your command line:

Navigate to http://localhost:3000 in your browser; you should see a standard "greeting" screen indicating that the Rails app is successfully running: 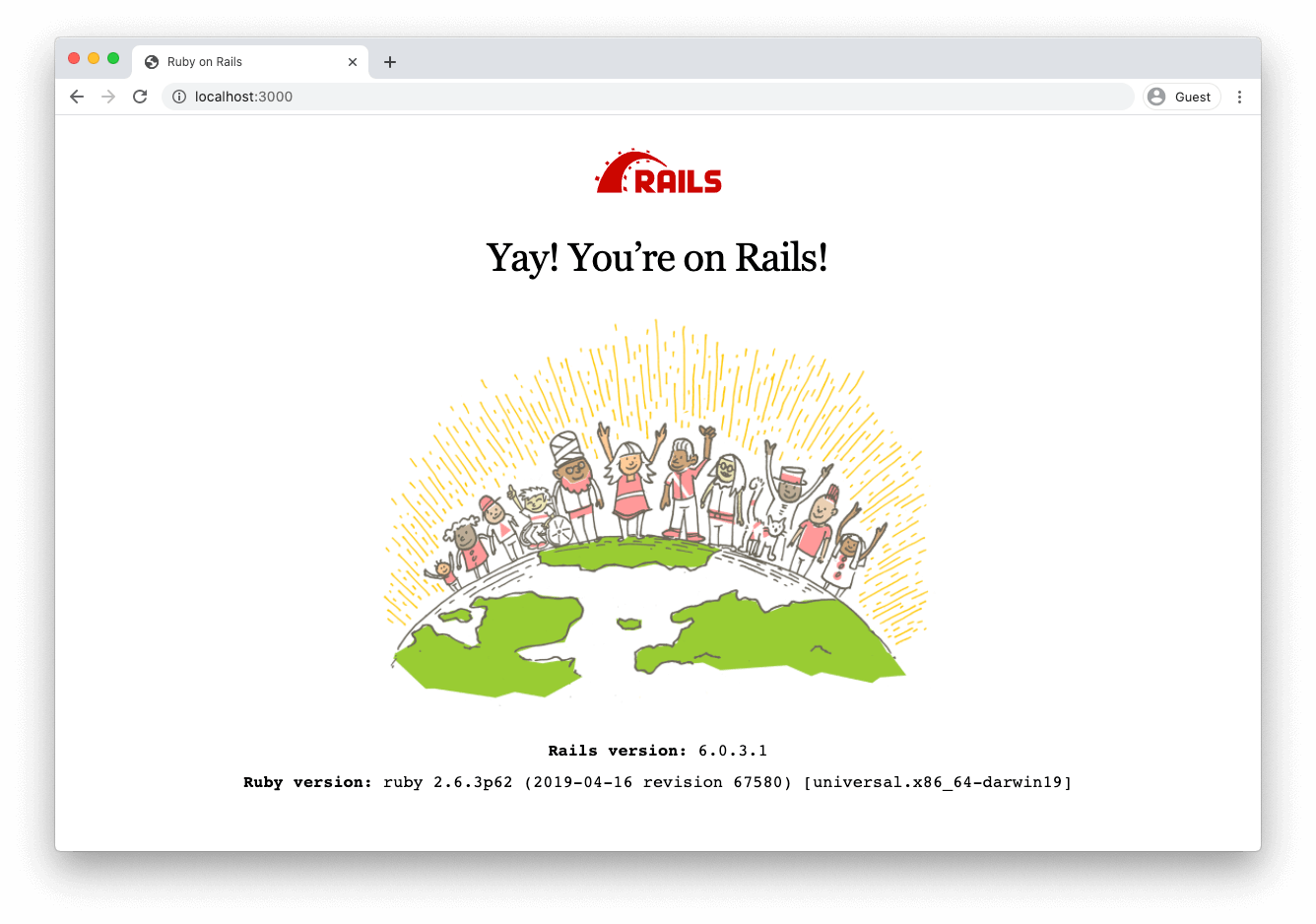 Now that you're up and running, it's time to start building your API. Stop the running Rails process (ctrl + c) and read on!

In this section, you'll build a class for handling JSON Web Token (JWT) verification, plus a service that uses the JWT class to perform authorization when new requests are sent to your API.

First, you'll need to add the jwt gem to your application. Open Gemfile in your project's root directory and add the following line to the file:

Run bundle install from the command line to install the gem.

Next, you need to add the API identifier and domain values from your Auth0 configuration into your Rails environment.

In your command line, run the following:

Tip: If you don't have a default text editor set up in your command line, you may need to pass an EDITOR argument with the command, e.g., EDITOR="vim" bundle exec rails credentials:edit --environment development

If you've used Rails 5, you're probably familiar with the introduction of encrypted credentials in Rails 5.2. The reason you're passing --environment development into the argument is a Rails 6 development — credentials now support multiple environments!

When the credentials file opens, delete any existing contents and add the code snippet below. Be sure to replace {AUTH0_DOMAIN} with the Auth0 Domain value you copied down in the "Create a New Auth0 API" section. If you used a custom identifier value in that section, you'll also need to replace the api_identifier value.

After you've saved the credentials file, open your project directory in your code editor of choice. Create a directory under app called lib and create a new file called json_web_token.rb.

Tip: The reason you're creating the new class in app/lib rather than lib is that subdirectories under app are autoloaded by default. If you're not familiar with Rails 6 autoloading with the Zeitwork engine, the Rails guide to autoloading or this article on understanding Zeitwork in Rails 6 can provide more information.

Add the following to json_web_token.rb:

This class is taken pretty much verbatim from the Auth0 Rails API QuickStart. It performs the actual verification of the JWT-formatted access token that API requests will provide.

Next, create a subdirectory under app called services. Create a new file called authorization_service.rb and add the following to it:

By extracting the authorization logic to a service, you're separating the concerns of verifying the authenticity of a JWT versus authorizing an HTTP request. The AuthorizationService grabs the access token in the Authorization HTTP Header and passes it to the JsonWebToken for verification.

With this separation of responsibility, you can limit any possible future changes to the JWT verification process to the JsonWebToken class. With your AuthorizationService in place, you can now easily add an authorization check to your controllers — and you'll do just that in the next section!

Create a new file called secured_controller.rb in apps/controllers and add the following to it:

The SecuredController inherits from ApplicationController and adds a before_action call, ensuring that every request will pass through the AuthorizationService before running any additional handlers. SecuredController also handles returning a 401 Unauthorized response if the request doesn't pass muster.

One more thing: you'll want to disable Parameter Wrapping in our API, for simplicity's sake. Open config/initializers/wrap_parameters.rb and change the uncommented code to read as follows:

And with that, your scaffolding is complete, and you're ready to create a real live secured API endpoint!

The Rails CLI can be used to create the various moving pieces you need for an API endpoint. Head to your command line again and run the following:

The resource generator is a quick way to create a model, controller, and route (plus unit tests) for your new Chirp data type. Running rails db:migrate afterward creates the necessary tables in your database.

With your scaffolding complete, it's time to write the code to handle your endpoint!

First, open up app/models/chirp.rb and add the following to the model class:

This line will validate the body and published fields when a new Chirp is created and automatically return a 422 response code when a POST request without those fields is received.

Next, open app/controllers/chirps_controller.rb and replace the contents with the following:

If you've worked with Rails before, this should look pretty straightforward. The controller supports GET requests (both of specific Chirps and all Chirps), POSTs to create new Chirps, and DELETEs to destroy specific Chirps.

It's important to note that the code sample changes the controller's inheritance chain. The generated controller inherits from ApplicationController, whereas the above code inherits from SecuredController, so all requests must include an access token.

Your API endpoint should now be working, but there's one issue: much like Twitter, you might want your Chirps to be publicly viewable! For that to work, unauthenticated GET requests need to be allowed, but POST and DELETE requests should still require an access token.

Luckily, allowing this is straightforward. Add the following line to the top of your ChirpsController class:

With skip_before_action, individual controllers like ChirpsController can easily override the default SecuredController behavior as needed.

And with that, your API is ready to go!

To test your API, head back to the API page of your Auth0 Dashboard and click on "Rails Secure API" to view the API details. Click the "Test" tab and scroll down to the "Asking Auth0 for tokens from my application" section. Under the "Response" heading, you can copy a test access token to use in requests to your API. 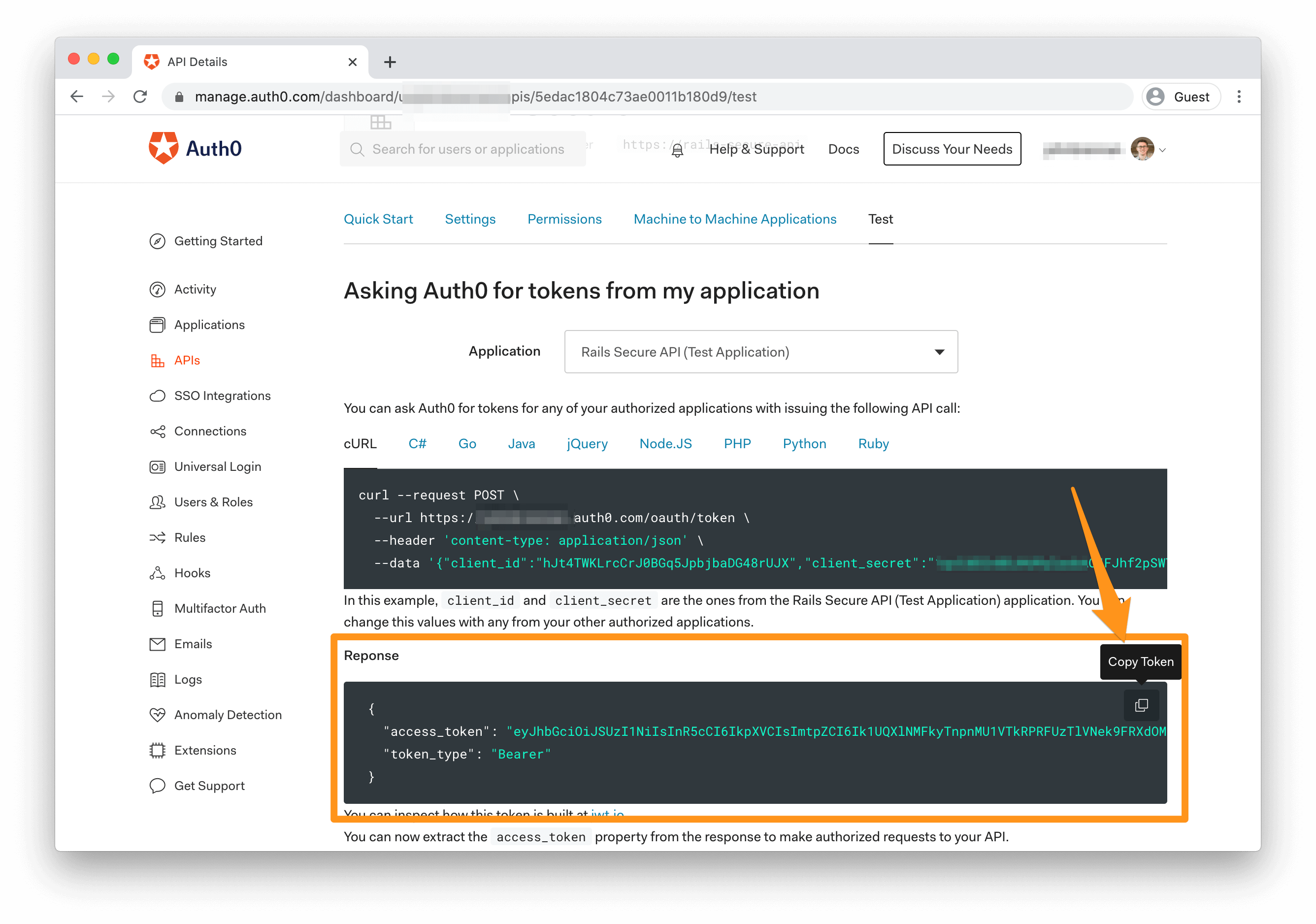 Access token in metaphorical hand, it's time to make a request. In your command line, start the Rails server:

(The request examples here use cURL, but Postman or any number of other tools for crafting HTTP requests will work.)

First, request the chirps endpoint without your access token to ensure unauthenticated GET requests work:

You should see the following response:

Your request is working, but since no Chirps exist in the database, an empty array comes back.

Next, make an unauthenticated POST request to ensure your SecuredController implementation is correct:

You should see the following response:

Success! Without an access token, you can't create a chirp.

Let's successfully create a Chirp; To do so, you'll need to add the Authorization header to your request. Replace [ACCESS_TOKEN] with the token from your Auth0 dashboard and run the following command:

You've successfully made a secure request to your API and created your first Chirp!

You can now request that record without needing an access token:

To delete the record, you'll need to provide the access token once again:

The -i argument is provided to view the full HTTP response, including headers. You should see a response similar to the following:

A 204 response is what you specified in the controller on a successful delete, which means it worked. Your API is now fully operational, and you're on your way to creating your own miniature Twitter!

Rails is an excellent choice for spinning up APIs and using the many tools it provides to build and secure your endpoints. While well-known gems like devise exist to build your own token authentication solution, it adds complexity and overhead to building and maintaining your API. Using Auth0 for authentication and credential handling, social login, and features like role-based access control and custom user metadata, you can keep the complexity of user management separated from your authorization and business logic in your codebase.

Some next steps to take could be to continue building the functionality of your API or start exploring Auth0's QuickStarts for JavaScript single-page apps to create a front-end for your API. Front-end apps can perform the initial authentication with Auth0, providing you with the access token you need to communicate with your API.

The repository for the complete application described in this tutorial can be found on GitHub. 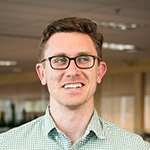 John is an R&D Content Engineer at Auth0. He has nearly a decade’s experience in full-stack software development in a variety of environments, languages, and frameworks. He relishes the challenge of learning hard-to-grasp technical concepts and helping others understand them in a clear, concise manner. His current technical interests are in API design and scalability, Ruby on Rails, accessibility, single-page app architecture, and the ever-changing JavaScript ecosystem. When he's not working, John is usually cooking, doing creative writing, running, or wrangling a toddler.
View Profile

John is an R&D Content Engineer at Auth0. He has nearly a decade’s experience in full-stack software development in a variety of environments, languages, and frameworks. He relishes the challenge of learning hard-to-grasp technical concepts and helping others understand them in a clear, concise manner. His current technical interests are in API design and scalability, Ruby on Rails, accessibility, single-page app architecture, and the ever-changing JavaScript ecosystem. When he's not working, John is usually cooking, doing creative writing, running, or wrangling a toddler.
View Profile