Shortly after the release of Angular 8, the NgRx team released their own version 8. It was a big release full of fantastic improvements to the library. While I'll let you read the official release announcement by Tim Deschryver, here are the highlights:

We're going to dig into what that means and how these functions will make your life better, but before we do that, we should make sure you know how to update to version 8 to take advantage of these new features.

How to Update to NgRx 8

In order to update to NgRx 8, you'll need to be sure your project is updated to Angular 8. You can update your Angular CLI globally by running this command:

In a project that needs to be updated to Angular 8, you can run the following:

You can then run the following to update to NgRx 8:

When working on this article, I ran into a bit of a problem with the TypeScript version. It seems like there was a conflict between the required versions, so I had to manually lock in version 3.4.3.

If you're using ngrx-data, you can easily migrate to @ngrx/data with this command:

For a more thorough explanation of this process, Wes Grimes has written a great article on how to upgrade to Angular 8 and NgRx 8. For more specific details on migration to NgRx 8, check out the official migration guide. Finally, don't forget that Angular has an official update tool to help with moving to new versions of Angular.

With that out of the way, let's get to the fun stuff!

One of the most common complaints about NgRx (and the Redux pattern in general) is that there is too much boilerplate. Once you dig into the library and the pattern, though, you start to understand that the initial setup is a completely worthwhile investment when you're managing state in large, complex applications (which is what NgRx is designed for!).

That being said, the NgRx team has listened to the developer community and made some huge improvements in "developer ergonomics" (a fancy way to say making it easier to write code) with version 8. Most of these improvements are due to a refactor of how actions, reducers, and effects are set up. There are now helper methods that are easy to understand and take less code to write. Let's take each of them in turn.

As my friend Mike Ryan says, "Actions are the gluten of the NgRx loaf." Indeed, they are the core of any NgRx application. Great care and attention are required in deciding what actions your app needs. Unfortunately, actions take a lot of code to set up. Just look at this excerpt from the application we built in my original NgRx Authentication tutorial:

This excerpt only contains three of the eight actions in that application and it's a very small app! As Alex Okrushko points out in his excellent article on the new action creators, enums and strings also make it very difficult to see where actions are used. And don't get me started on those union types! You can see why a change was needed.

Enter the new createAction method. With createAction, you pass in the action name along with an optional props function with a specified argument type as a destructured object.

Yikes, that's a lot of jargon. Let me explain that with an example.

Let's say I have an action called booksLoaded that needs to receive an array of books (books) of type Book[] when created. My props function for createAction would be props<{ books: Book[] }>(). (With destructuring, { books } is the equivalent of { books: books }.)

That way, when I create a new action of this type, I can directly pass the array of books into the constructor: new booksLoaded({ booksFromServer }).

So, the above authentication actions would be refactored like so:

There are two things to notice here. First, notice that the action constant names have gone from Pascal case (LoginFailure) to camel case (loginFailure). This is due to actions changing from classes to functions and is a standard JavaScript style convention. Don't let that trip you up, but be mindful of that in refactoring.

Second, notice that I renamed payload to error because it is more descriptive. (I could have also given it a new type like Error, but it doesn't matter much in this example). While this is a great new feature with the redesigned action creator function, be careful of doing this. Do a search through your code to avoid breaking other parts of the app relying on a payload property (a great reminder from Gregor Woiwode). If you rename payload in the action creator, be sure to change it everywhere.

There's one last great feature of the new action creators. You can now specify a default value of a prop argument. For example, in the above loginFailure action, I could provide a default error message:

This would be a great backup in case the server fails to provide an error message for some reason.

To add one of these new action creators to your application, you can use the updated action schematic:

The new way to create actions is incredible, but it doesn't stop there. Reducers are also now easier to write thanks to the createReducer method.

Here's a typical example of a reducer you might find in a burger restaurant app:

This is a simple example, but as it scales up, you'll have a ton of case statements that will make understanding this code difficult. It gets messy fast (just like eating burgers, really).

With NgRx 8, you can use createReducer instead:

Much cleaner, isn't it? Each case uses the on function that receives the action and a function to modify state.

The on function can also take multiple actions, making it easy to grow the reducer function. For example, it's common for the success of a record addition and the failure of a record deletion to result in the same state. An example of this is when an app state includes both a collection of data (which should match what's on the server) and an array of IDs for faster lookup (which is maintained in memory). In order to make sure the array of IDs always matches what's on the server, it's necessary to account for failures of adding or deleting records.

Here's an example of that with the burger application:

Using the same reducer cases for multiple actions makes it easier to understand what's happening in this application in addition to ensuring the ids array doesn't get out of sync with the server.

One other important note on using createReducer. As of this writing, the Angular ahead-of-time (AOT) compiler (the compiler used for producing production builds) does not support function expressions. It's therefore necessary to wrap the createReducer function in an exported function like so:

Finally, as with createAction, there's a schematic for the new reducer style:

This schematic will generate a new file called my-new-reducer.reducer.ts. It will include both the createReducer constant and the exported reducer function for AOT.

Finally, createEffect is here to improve writing effects. Previously, effects used an @Effect() decorator. While this was fine, it was sort of the odd bird compared to all of the other more functional approaches NgRx takes.

Going back to the burger application, here's an example of the old style of effect:

The new createEffect helper simplifies this a bit and standardizes it to look more like creating actions, reducers, and selectors:

There's also a small modification in effects that don't dispatch new actions. Here's an effect that fires after a burger is successfully ordered, which redirects back to the home page and doesn't dispatch a new action:

Using the new createEffect function, you can refactor this code to the following:

That second argument of the createEffect function is for passing in metadata to control how the effect operates.

One final word on effects in NgRx 8. Previously, the team found that developers were either forgetting to handle errors in their effects or handling them incorrectly. To help with this, effects now automatically resubscribe on errors (instead of completing) so they continue to listen to dispatched actions. This is extremely helpful but it can also be disabled if you start noticing weird behaviors. Simply pass { resubscribeOnError: false } as the second argument of the createEffect function.

As with the other two examples, there's a schematic to add the new style of effect to your application:

This command will generate a new file called my-new-effect.effects.ts that imports createEffect and creates a class marked with the Injectable decorator.

Most applications these days are going to need some sort of identity management to persist user profile information and handle authentication and authorization. To implement an identity management strategy in your NgRx application, some of the syntax has changed with version 8, but the core principles remain the same. You'll use actions for logging in and logging out and effects for calling your authentication service, while your reducer handles modifications to state like logged in status and profile attributes.

I cover this at length in my NgRx authentication tutorial. Go ahead and sign up for a free Auth0 account and dig in to the tutorial to get started. 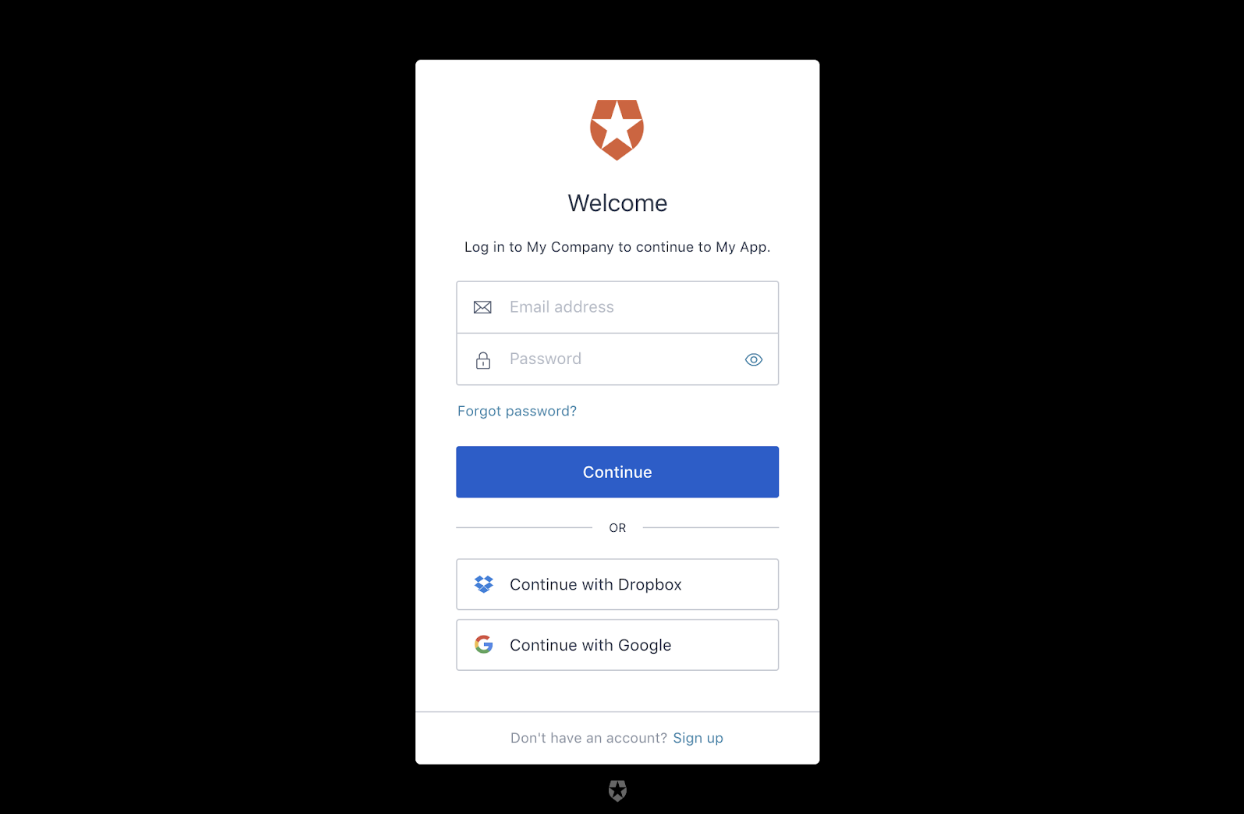 By the way, I'd love to hear how it goes while using the new helper functions in version 8 of NgRx, so reach out on our Community Forum any time.

I don't know about you, but I couldn't be happier with NgRx 8. This is a team of volunteers who are making great software and even writing phenomenal docs. With all of the improvements in this version, the future is looking bright. Give it a test drive and let me know how it goes!