Angular 8 has only been out for about a week at the time I’m writing this, but there’s already been 17,000 “What’s New” articles published. Rather than throw my own take on the pile, I’ll refer you to the official Angular release announcement but here are the high points:

In this article, I want to dive into that last one: differential loading. What is that? Why does it matter? What do I need to do about it (if anything)?

"Angular 8 is here! It features differential loading, better support for web workers, and much more."

Like most buzzwords in tech, the term “differential loading” is completely opaque about what it actually means. In a nutshell, differential loading means to send newer, flashier code to newer browsers and stable legacy code to legacy browsers. This generally translates into two things: modern syntax and polyfills. On a newer browser that supports recent syntax changes in JavaScript (such as arrow functions in ES2015 or async functions in ES2017), it’d be great to ship to code as-is with as few polyfills as possible to keep download time low. On legacy browsers, we’ll need both transpiled code and more polyfills to make things work. This way, newer browsers aren’t punished for legacy browsers by having to load a massive bundle, but legacy browsers aren't left in the dust.

Sounds cool, right? How does this work? Modern browsers have the ability to interpret a module type in the script HTML tag and to ignore a nomodule attribute. It looks like this:

When a modern browser (like a new version of Chrome) runs across this, it will know to only load fancyModernBundle. Likewise, when an older browser sees this, it won’t recognize the module type and only load legacyBundle. 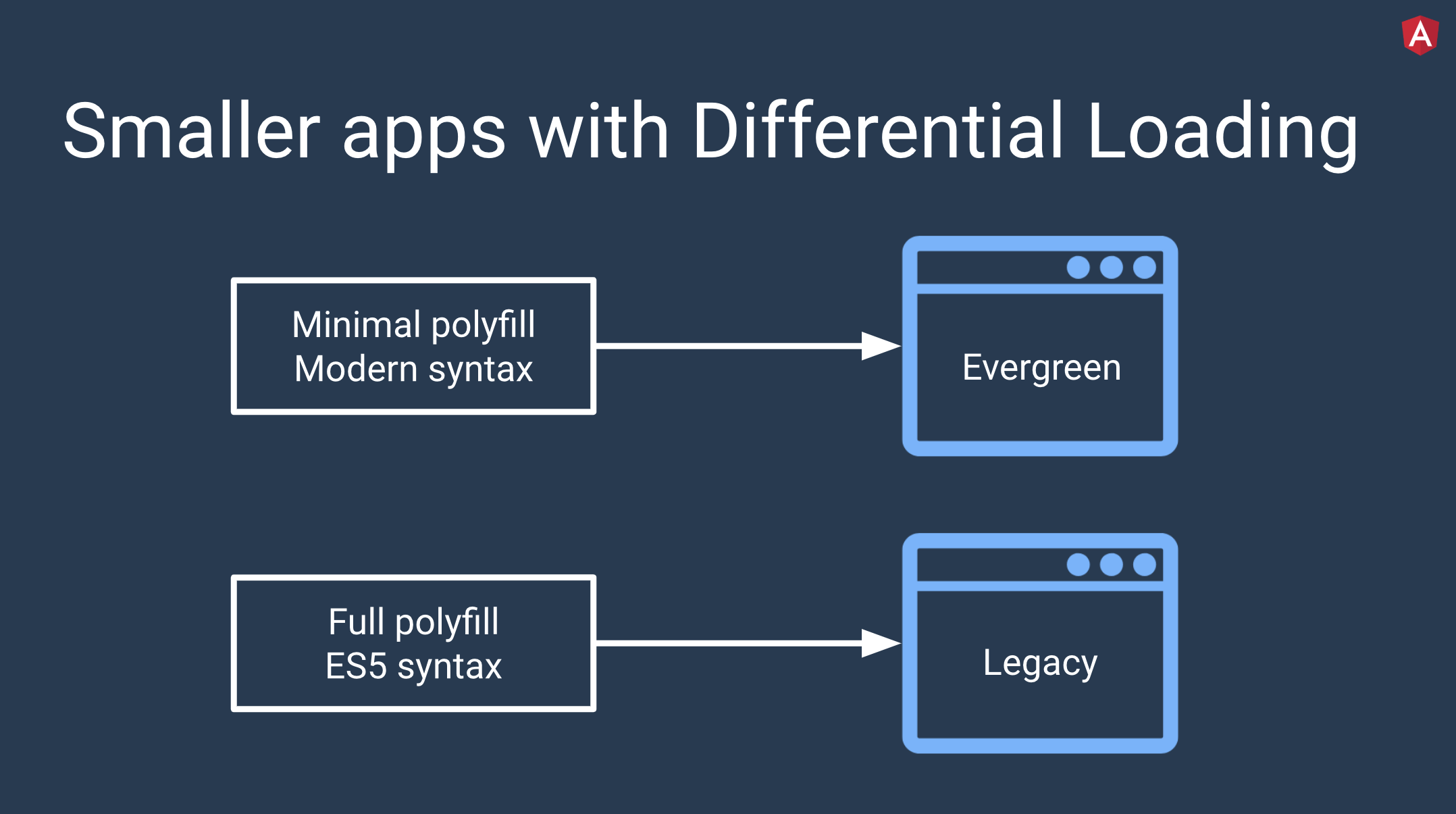 You’ve probably surmised by now that, in order to take advantage of differential loading, you’ll need to divide up your JavaScript code based on browser support. “Easy,” you think, “I’ll just plug the transpiled code into the nomodule tag and the original into the module tag.” Well, it’s not quite that simple. Unfortunately, not all browsers support all the same features of JavaScript. Beyond that, your users may not use the same browser you do. In fact, if your users are around the world, they may not even use browsers you’ve heard of — Opera Mini has over 100 million users in Africa!

It turns out that splitting up your bundle for differential loading is a combination of art and science. To pull this off, your bundler (like Webpack) and your transpiler or compiler (like Babel or TypeScript) must work together to divide up your code and add the correct polyfills in the right places. Luckily, there’s a configuration tool called browserslist that does nearly all of the heavy lifting for you.

Browserslist works with tools like Babel and is essentially a configuration tool that accepts query strings, which it runs against Can I Use data. Tools use Browserslist through either an entry in package.json:

Or in a separate config file called .browserslistrc:

Both of these formats contain the same query:

Browserslist also has a defaults query that works for many people. They’ve got great explanations of the queries on their GitHub repo and there’s even a site called browserl.ist that lets you plug in a query and see a visual list of supported browsers. 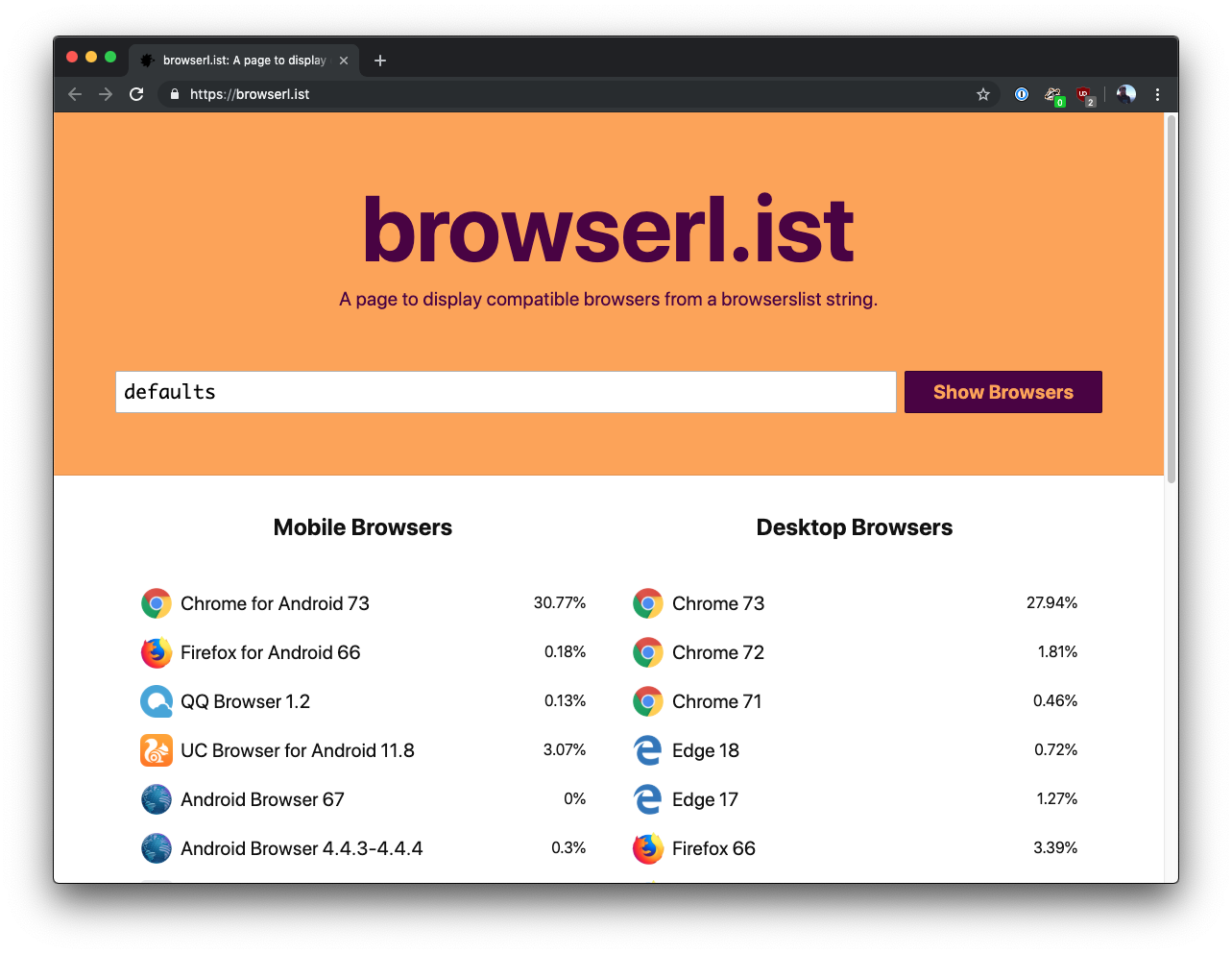 Ordinarily, you’d need to configure your bundler and Babel or TypeScript to use browserslist to split up your code into the correct bundles. With version 8 of the Angular CLI, you actually get this set up right out of the gate with nothing for you to do! This is awesome because differential loading saves on average 7-20% in bundle size for Angular applications in modern browsers. In fact, angular.io saved over 40kB of its initial bundle size for modern browsers when the team enabled differential loading.

Want to check this out for yourself? It’s really easy!

"In Angular 8, differential loading saves on average 7-20% in bundle size in modern browsers!"

First, make sure you have the latest version of the Angular CLI installed:

If you’d like to try this on an existing project, you can update it to Angular 8 by running:

Check out the Angular Update Guide if your app requires more heavy lifting to update, like if it’s currently in version 6 or lower.

Otherwise, you can create a new application:

Follow the prompts about routing and styling and then you’re good to go!

If you open the new project in your favorite editor, you’ll notice a new file called browserslist. It contains the following by default:

You can adjust this list to match better with your own user demographics.

One very important note about this: See that not IE 9-11 part? If you need to support those browsers, you can remove the not, but it comes at a price. Those versions of Internet Explorer can’t take advantage of differential loading, so it will be disabled.

If you open tsconfig.json, you’ll see a particularly big change in the target property: it’s set to es2015 by default instead of es5.

Now that you’ve seen where the configuration lives, build the application with this command:

After it’s done, open up dist/index.html and notice the script tags:

See all those module and nomodule instances? The Angular CLI did all that for you!

Now you just need to see it in action. Install a simple server like http-server:

Then, within your project folder, serve up the project inside the dist folder:

Open Chrome or another modern browser and head to the address of the server (on my machine it’s http://192.168.0.4:8080 but it may be different for you). Open up the network tab of the developer tools and refresh the page. You should see only the scripts that include es2015 in the name! 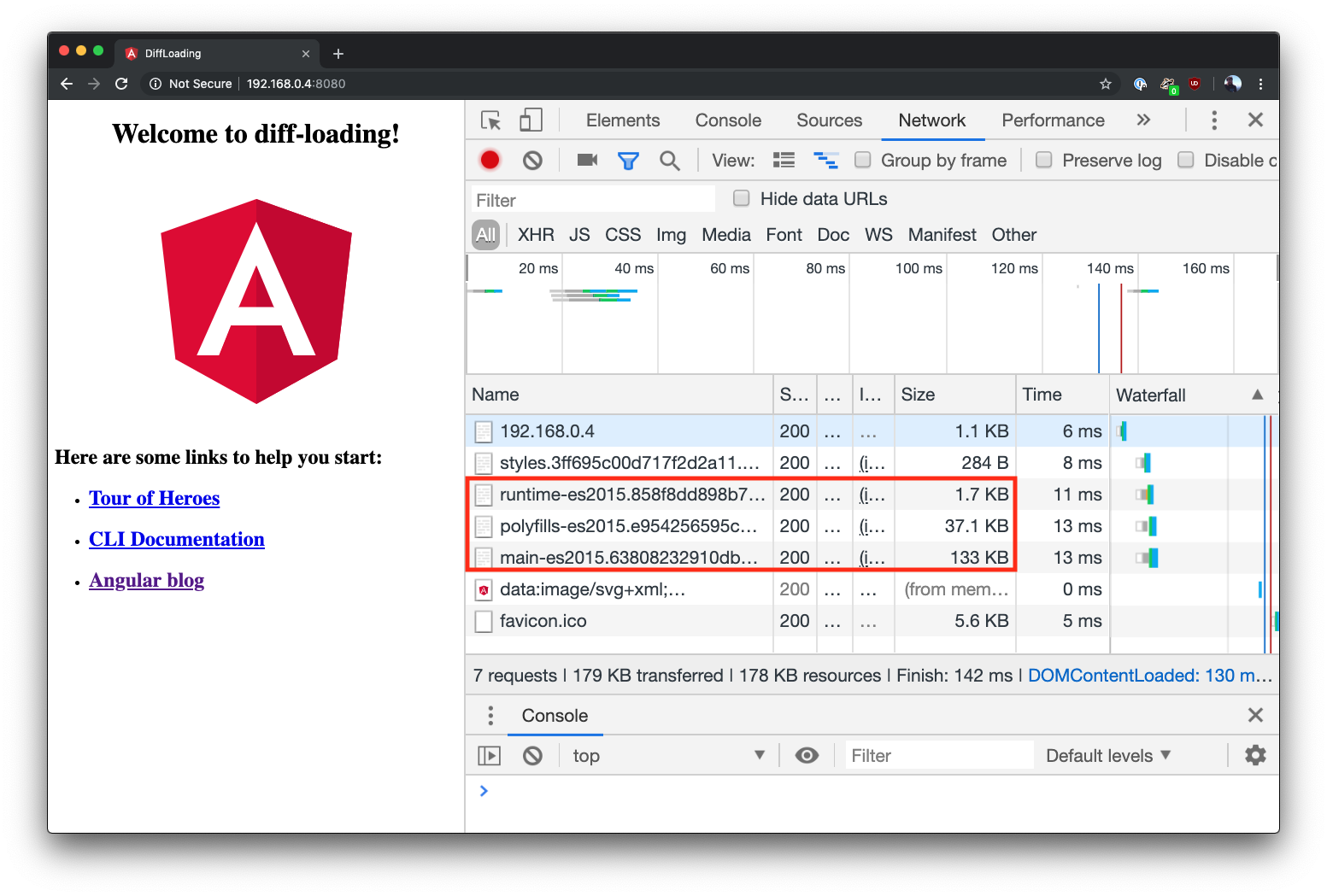 One quick note before I end this tutorial. If you change the different configurations, there are four different scenarios you could end up with:

To read more, check out the official documentation.