TL;DR: In this article, you will learn about reactive programming, why it is important, and when to apply it to your projects. You will do so by learning about how reactive programming came to be and its implementation in Spring Boot via the Spring WebFlux API. To better understand these concepts you will build a reactive RESTful API using Spring WebFlux and secure it using OAuth 2.0. You can find the project built throughout this article in this GitHub repository.

Now, in relation to your development environment, you will need to have the following installed:

Traditionally developers have always done I/O on the main thread of their applications. This raises a flag because it will block the execution of your program. To solve this problem, you can do I/O on a separate execution thread, but since threads take a lot of memory, this solution will not scale with many I/O operations. Additionally, this solution is still blocking.

To solve this problem, you will need a single thread and an event loop just like Node.js. This will guarantee asynchronous and non-blocking I/O operations. Spring Boot implements this solution through Project Reactor and the reactive programming paradigm. Before you move into playing with Project Reactor, it will be good to understand its foundations.

What is Reactive Programming?

What is Asynchronous Programming?

Asynchronous programming is paradigm which allows developers to write code that can respond to future events or change in the state of your program. The best example of this kind of programming comes from JavaScript. As an example, the setTimeout function, waits for a given number of milliseconds (a second is a thousand milliseconds) and then calls a function.

If you run the following code, you will realize that "Tick" is printed after "Hello" because the first argument to setTimeout is a callback that will be called after 500 milliseconds. In other words, after "Hello" gets printed. Using this callback principle, you can access shared resources without blocking your program execution. To support asynchronous programming, the API of reactive libraries are either callback or declarative/functional (through functions like map, filter and reduce) based. Due to callback hell, many reactive libraries are declarative/functional based.

What is Non-Blocking Programming?

In order to understand non-blocking I/O, you need to understand what blocking I/O is. Traditionally, access to a database or operating system resources will block the main thread of execution and only continue execution once that operation is done. This is blocking I/O. Now with the support of reactive database drivers in MongoDB and relational stores via projects like the R2DBC project Java web application can now access these resources without blocking your thread of execution.

To support Reactive programming, the team behind Spring Boot created a library called Project Reactor which implements the specifications of the Reactive Streams initiative. This is an initiative to provide a standard for asynchronous stream processing with non-blocking back pressure. This standard is specified through the following interface:

While dealing with reactive streams, the data flow as follows:

For more details about the Reactive Streams interface check out this resource.

Project Reactor implements two data types for the Publisher interface: Flux and Mono. Flux is for a list of objects and Mono for zero or one object. These implementations support operators like map, filter, reduce, and flatMap which maps every entry in a Publisher to another Publisher. Last but not least, in order to get data from a publisher(Flux or Mono) you need to call the subscribe on it.

What is Spring WebFlux

In this section, you will learn some key features of Spring WebFlux by creating a movie REST API with it. For starters, go to the Spring Initializr page and fill out the form like this: 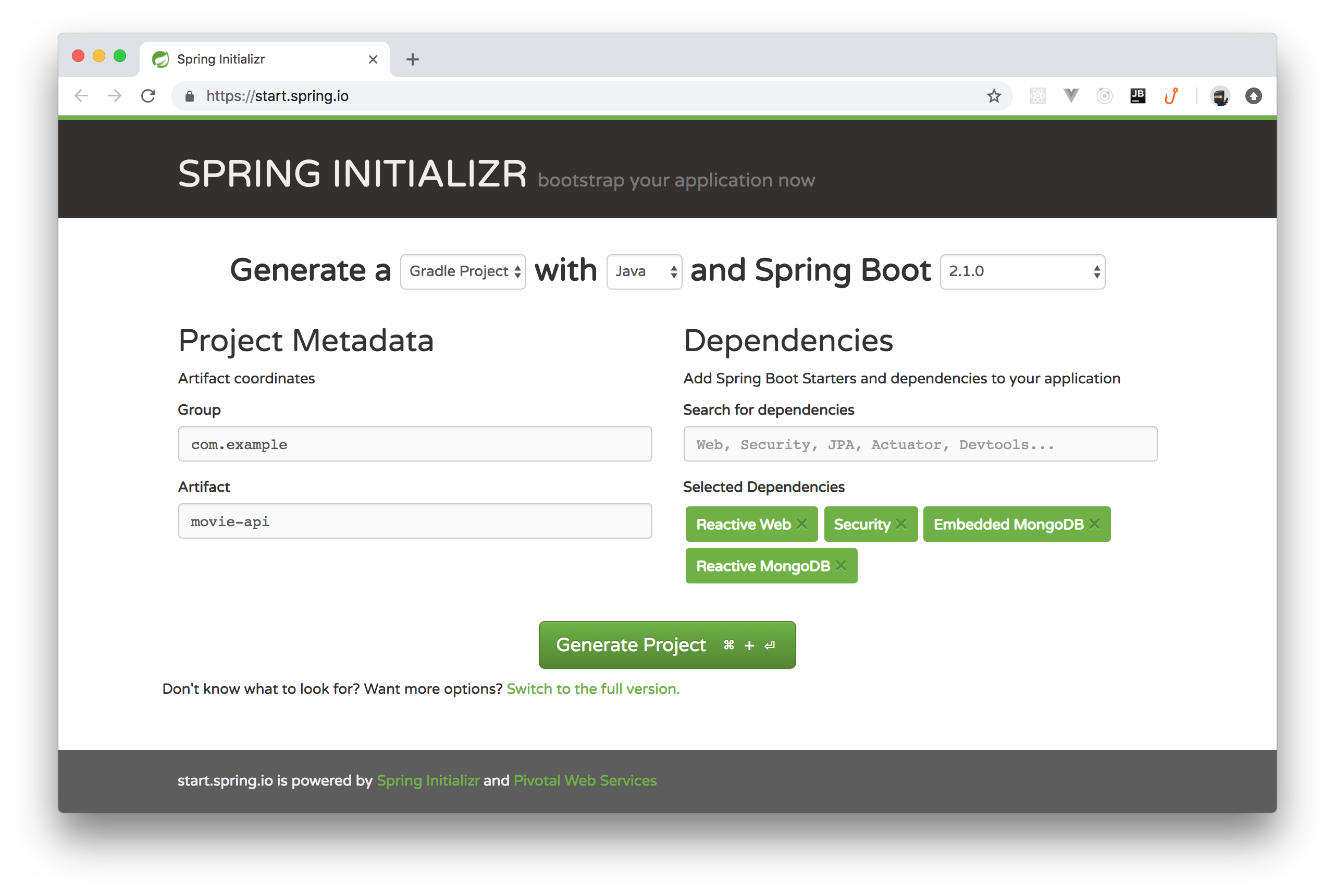 After filling out the form, click on the Generate Project button. This will download your project for you. Then, unzip the downloaded file and open your project in your favorite IDE. After that, navigate to your build.gradle file in the project's root directory.

Next, you need to define a Movie entity to represent movies in your database. To do that, start by creating a package called model inside the com.example.movieapi package. In that package, create a class called Movie and paste the following content in it:

This class is annotated with @Document because MongoDB is a document database. At the time of this writing, Spring Boot does not support reactive database drivers for relational databases, which is why I decided to go with MongoDB. @Id is used to annotate the instance variable you will use as a key in your database.

With that covered, you can now query your database and get results. Next, you need to expose these database queries via RESTful endpoints. For starters, create a controller package in your com.example.movieapi package. In this package, create a file called MovieController and add the following code to it:

You need to examine these methods carefully. Notice how they do not return void or a Movie type but instead Void or Movie either wrapped by Flux or Mono which are publishers from Project Reactor added in the spring-boot-starter-webflux dependency. To help you better understand Project Reactor's operators, I will give a detailed explanation of each method in this controller:

With this controller in place, you now have all the functionality to access your data but you do not have data in your database. To solve that, go ahead and add data to your database by updating the MovieApiApplication class as follows:

Now, you can run your RESTful API by either issuing the command ./gradlew bootRun from the command line or by building and running the project in your favorite IDE. If everything works as expected, your RESTful Spring Boot API will be up and running. To test it, you can use a tool like Postman or curl to issue requests to the available endpoints. But before you start testing, comment out the spring-boot-starter-security in your build.gradle file, this will remove the default security on your endpoints.

Run the following commands to test your API:

In this section, you are going to secure your API with Auth0's OAuth 2.0 implementation. You'll need to sign up for a free Auth0 account here. After signing up for your Auth0 account, you will need to create an API on Auth0 to represent your Spring Boot API and to be able to configure it to authenticate requests. To do this, head to the APIs section on your Auth0 dashboard and click on the Create API button. After that, the dashboard will show you a form where you will have to enter:

Then, you can create your Auth0 API by clicking on the Create button. Now, that you have created your Auth0 API, you need to add security configuration to your Spring Boot project. For this, create a class called SecurityConfig in your com.example.movieapi package. Add the following code to this file:

Note: You will have to uncomment the security dependency (spring-boot-starter-security) on your build.gradle file to be able to import the dependencies above.

To support OAuth authentication you need to add the following dependencies to your build.gradle file.

Finally, you have to add Auth0 configuration to your Spring Boot project so that it knows where to verify your JWT access tokens. To do this, go to the resources folder of your project and rename your application.properties file to application.yml and add the following configurations to it:

Make sure you replace both YOUR_AUTH0_DOMAIN placeholders with your own Auth0 domain (e.g., blog-samples.auth0.com). Also, if you have chosen another identifier for your Auth0 API (rather than http://localhost:8080/movies), make sure you update the id property accordingly in the file above.

With that in place, your API is now secured. You will still be able to read from your API but not carry out write operations. To interact with your endpoints you need an access token. The strategy to get one usually used for this depends on the type of client application you are developing. You can read more about which authentication flow strategy to use at Auth0. For this simple test, you can get an access token from your API dashboard. To do so, go to the APIs section in your Auth0 dashboard, click on the API you created before, and then click on the Test section of this API. There, you will find a button called Copy Token. Click on this button to copy an access token to your clipboard 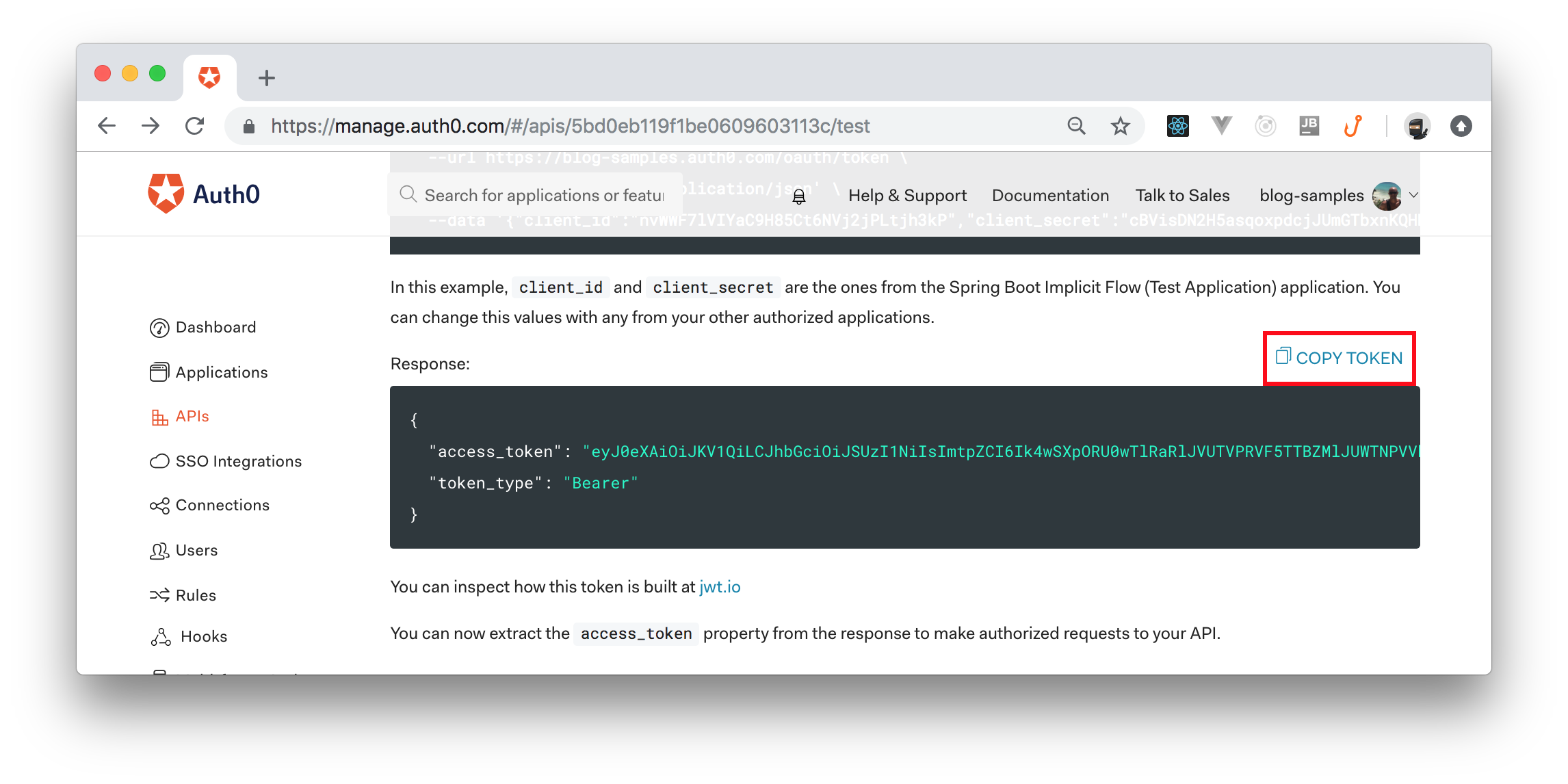 After copying the token, open your terminal and run your application: ./gradlew bootRun. Then, open another terminal and run the following commands (make sure to replace <YOUR-ACCESS-TOKEN-HERE> placeholder with your access token):

Finally go back and run the curl commands you ran before securing your API. This time make sure you pass a -i flag to the command after curl. As you will see, GET requests will succeed as before but other requests will return an unauthorized request error.

Although you used annotated controllers to develop your API, you can also develop it in a functional and declarative style using functional endpoints.

In this article, you just scratched the surface of Spring WebFlux. However, this framework supports many other amazing features like WebSockets, WebClient, and functional endpoints. To learn more on the topic visit the official documentation.