This document will help you troubleshoot your configuration if you get 401 (Unauthorized) response from your API. We recommend that you log in to follow this quickstart with examples configured for your account.

If the configuration of your JSON Web Token (JWT) middleware does not match the JWT that was passed to the API, you get a 401 (Unauthorized) response from your API.

This document will help you troubleshoot your JWT middleware configuration.

There are 5 criteria for validating a JWT token.

You can inspect a JWT with the JWT.io website. Use the debugger on the website to check if your JWT is well formed. You can also inspect values of the various claims. 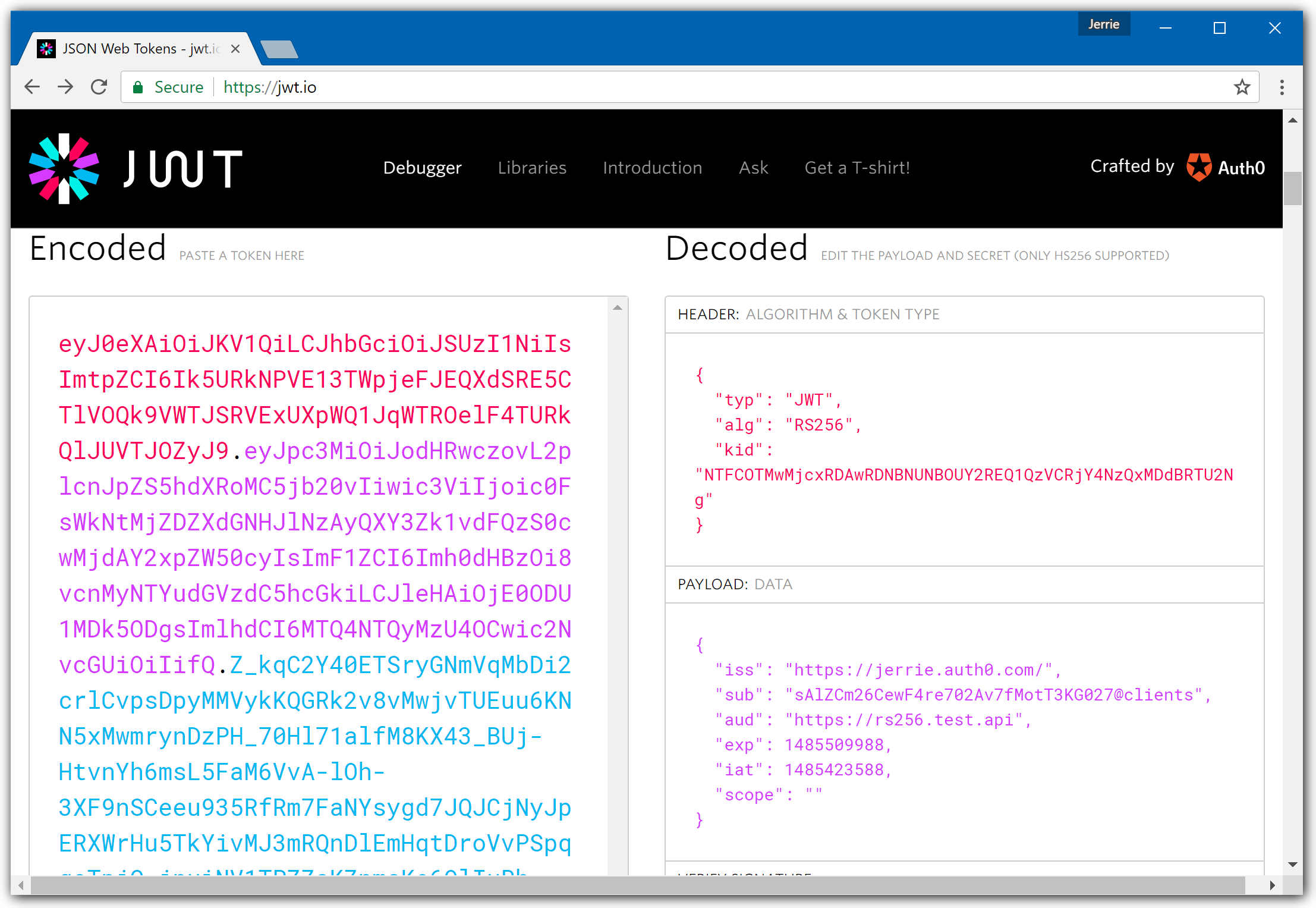 Check if the values of the JWT token match exactly the values in your JWT middleware registration. This includes the trailing slash for the Issuer.

If your token is signed with the HS256 algorithm, the debugger view is different. 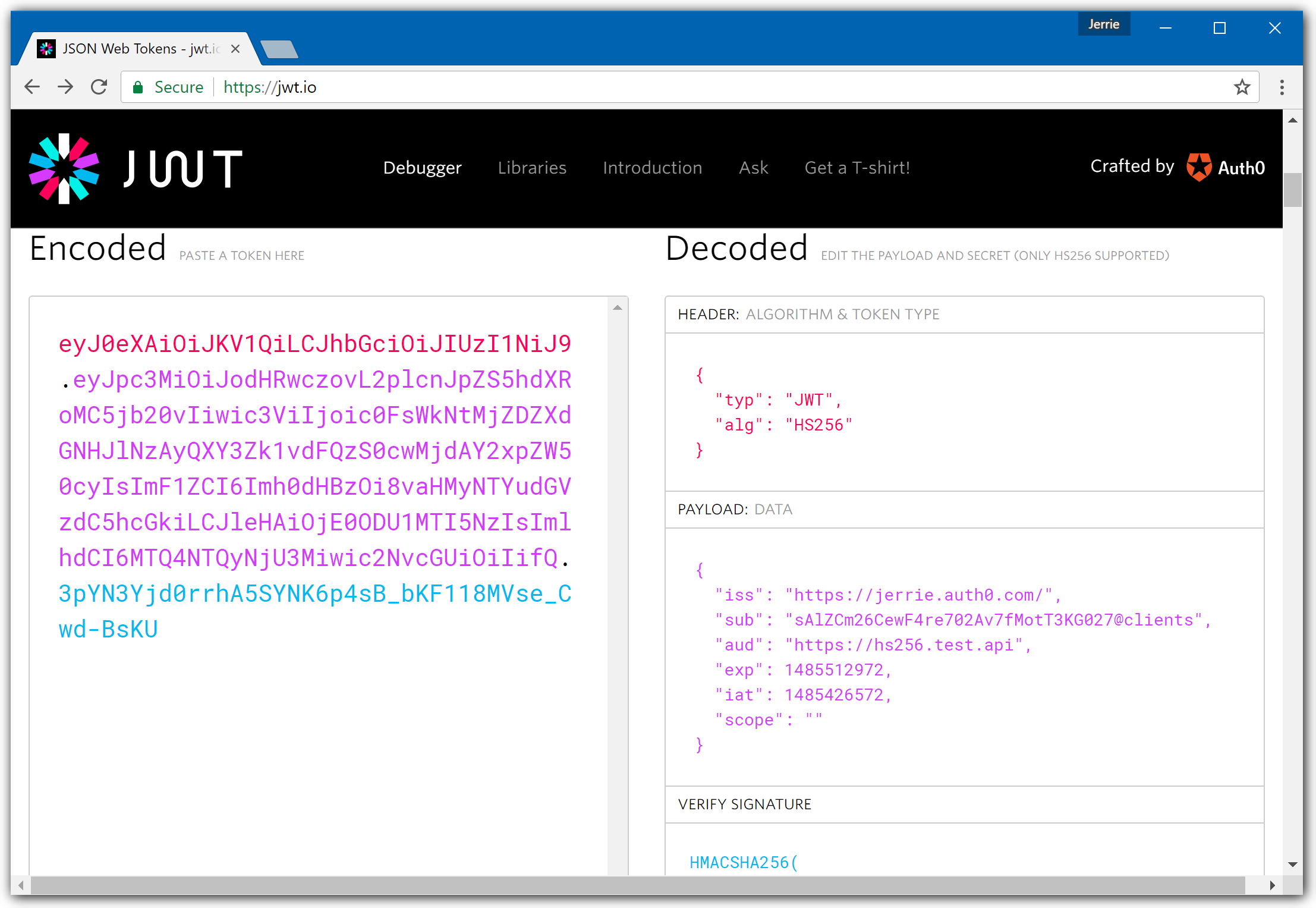 If your token is signed with the HS256 algorithm, the middleware needs to be configured in the following way:

To debug potential configuration issues, inspect the log files for your application. For more information, refer to the Logging in ASP.NET Core document.

In this example, we run the application from the command line and inspect the console log output.

1. Are you passing the JWT in the Authorization header?

Check if you are passing the JWT as a Bearer token in the Authorization header of the HTTP request.

If you are not passing the token, you will see the following warning: 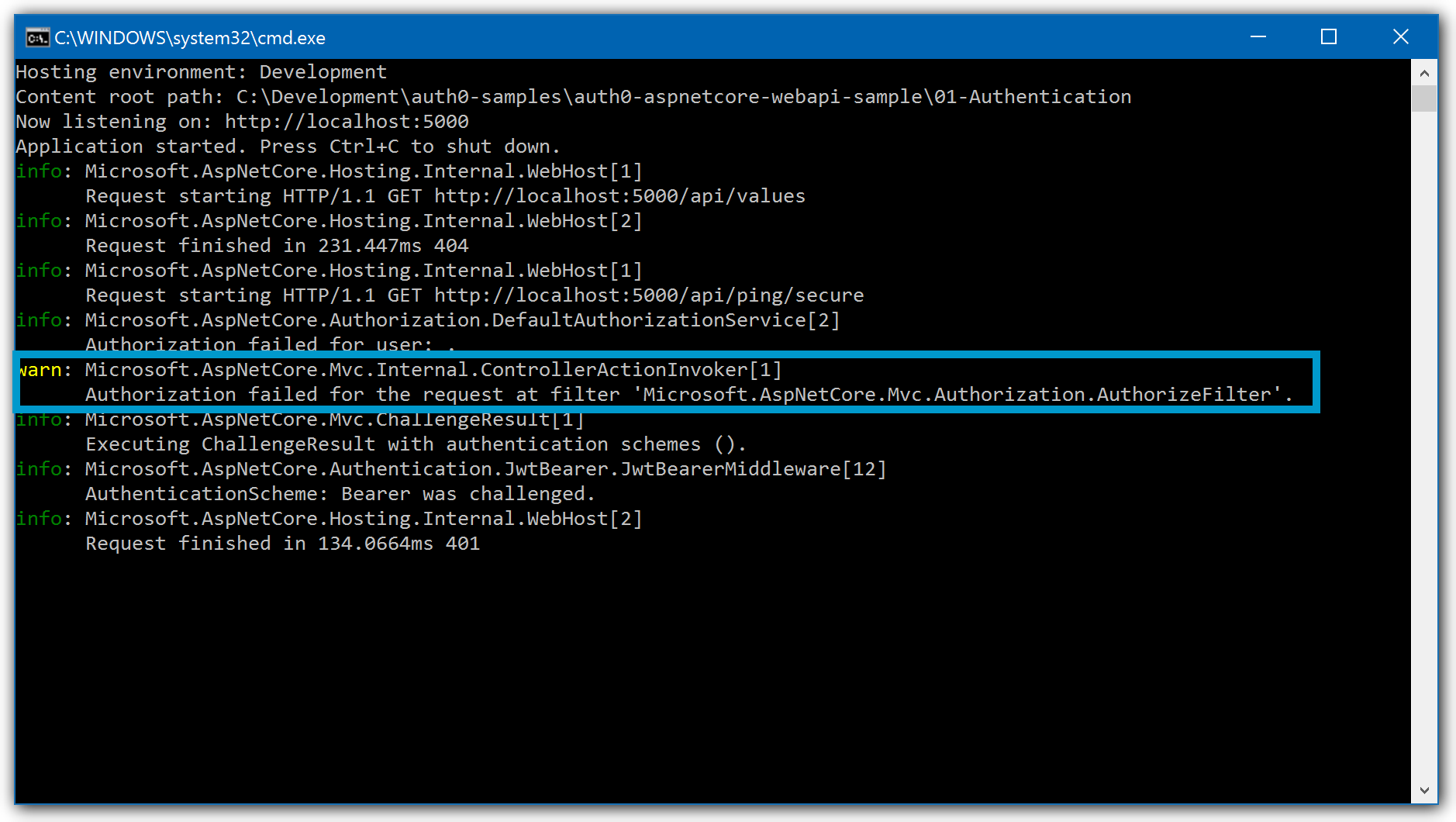 To resolve this issue, make sure you are passing the JWT as the Bearer token in the Authorization header of the HTTP request.

2. Did you configure the JWT middleware for the correct signing algorithm?

The following example shows that the JWT is signed with the HS256 algorithm and the middleware is configured to expect RS256 tokens: 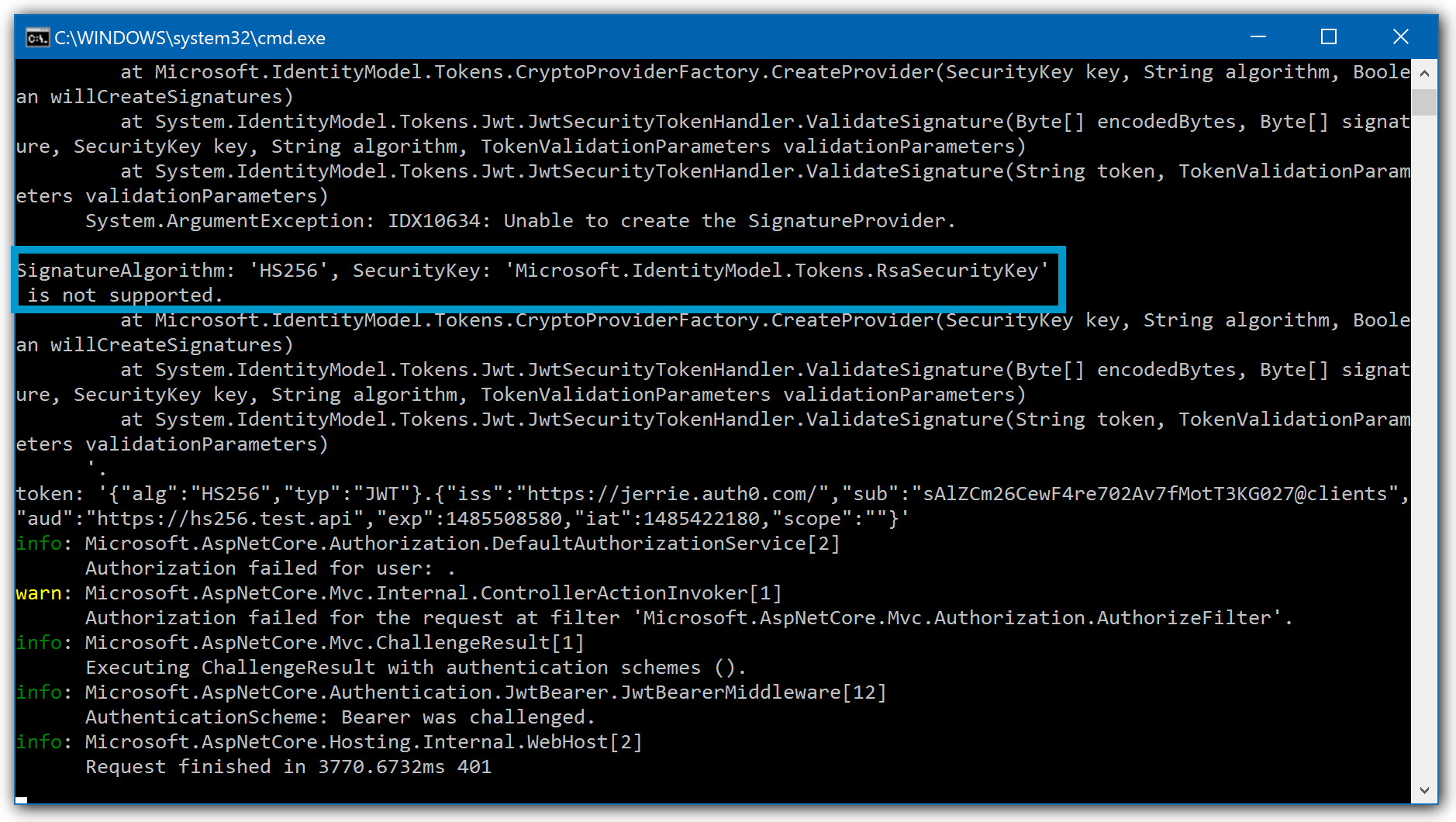 The following example shows that the JWT is signed with the RS256 algorithm and the middleware is configured to expect HS256 tokens: 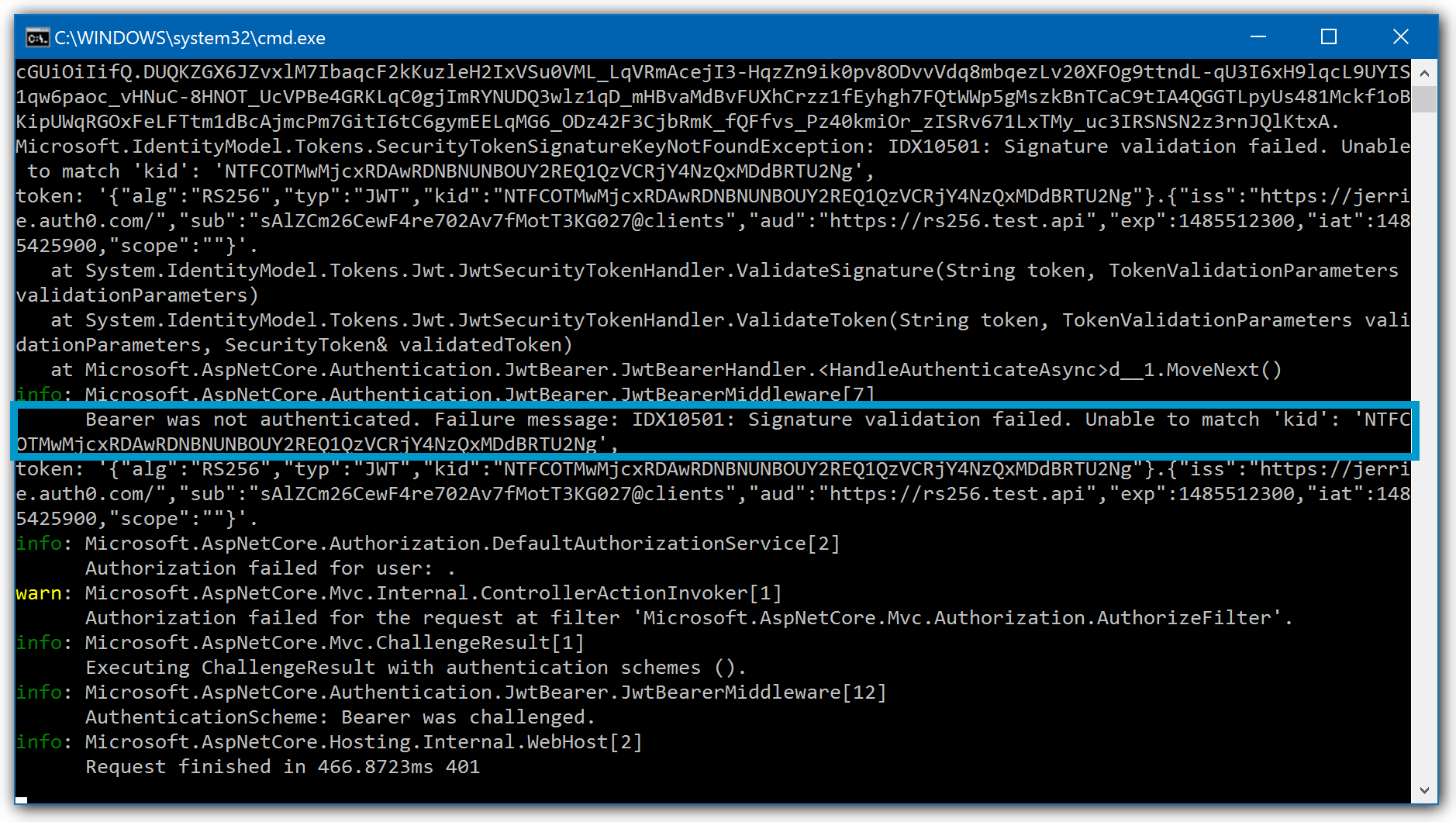 To resolve this issue, make sure that the algorithm for the JWT matches with the configuration of your middleware.

3. Has your token expired?

Each JSON Web Token is valid until the time defined in the exp claim runs out. If you send an expired token, the token will be rejected: 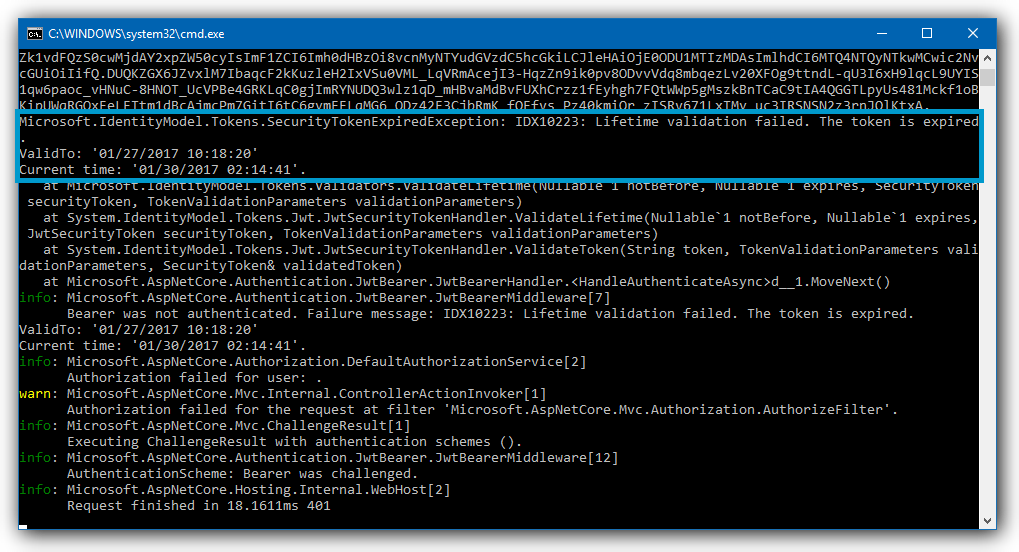 To resolve this issue, check if the token you are sending has not expired.

The value of the exp claim is a numeric value representing the number of seconds from 1970-01-01T00:00:00Z UTC until the specified UTC date/time. If you want to see the date/time for the value, visit EpochConverter.

4. Did you configure the correct issuer?

The Issuer specified in your token must match exactly with your JWT middleware configuration. 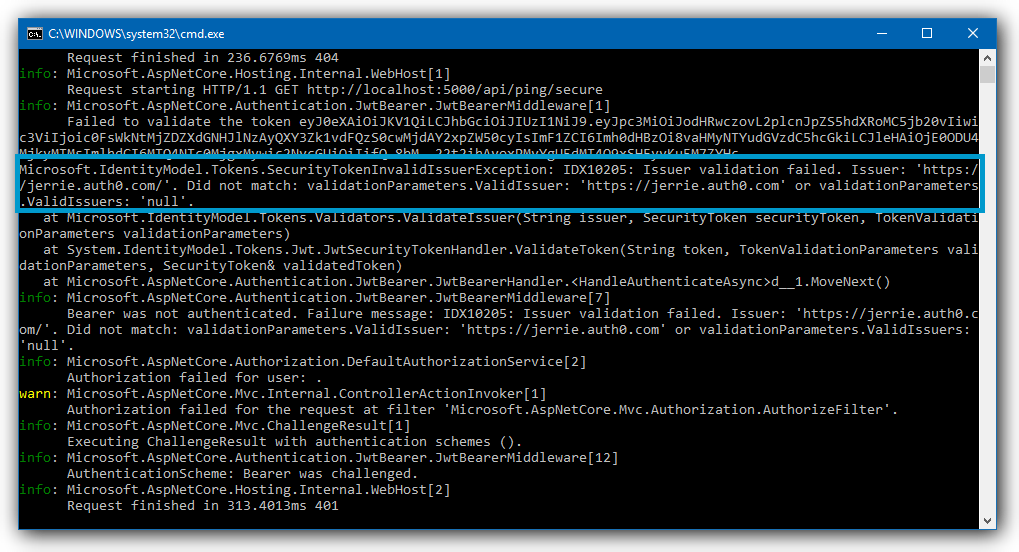 You will get this message only for the tokens signed with the HS256 algorithm.

To resolve this issue, make sure that you specify the correct issuer for your JWT middleware.

For HS256 signed tokens, specify the correct value for the ValidIssuer property of TokenValidationParameters.

For RS256 tokens, the JWT middleware downloads the OIDC discovery document from Authority and configures the Issuer based on the issuer attribute specified in that document.

If you are using RS256 tokens, the system checks their signature before it checks the Issuer.

5. Does the audience match your JWT middleware configuration?

Check if the audience specified in your token matches your JWT middleware configuration. 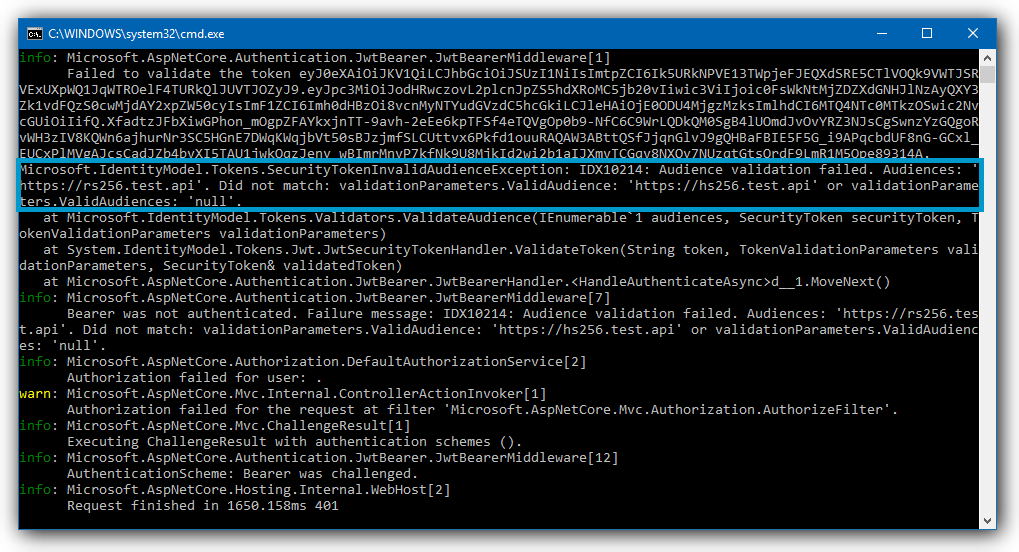 Any suggestion or typo?

Edit on GitHub
Use Auth0 for FREE