Auth0 provides authentication, authorization, and single sign-on services for apps of any type (mobile, web, native) on any stack. Authentication is critical for the vast majority of apps. We designed Auth0 from the beginning so that it could run anywhere: on our cloud, on your cloud, or even on your own private infrastructure.

In this post, we'll talk more about our public SaaS deployments and provide a brief introduction to the infrastructure behind auth0.com and the strategies we use to keep it up and running with high availability. This is an updated version of the 2014 High Scalability post about Auth0's architecture.

A lot has changed since then in Auth0. These are some of the highlights: 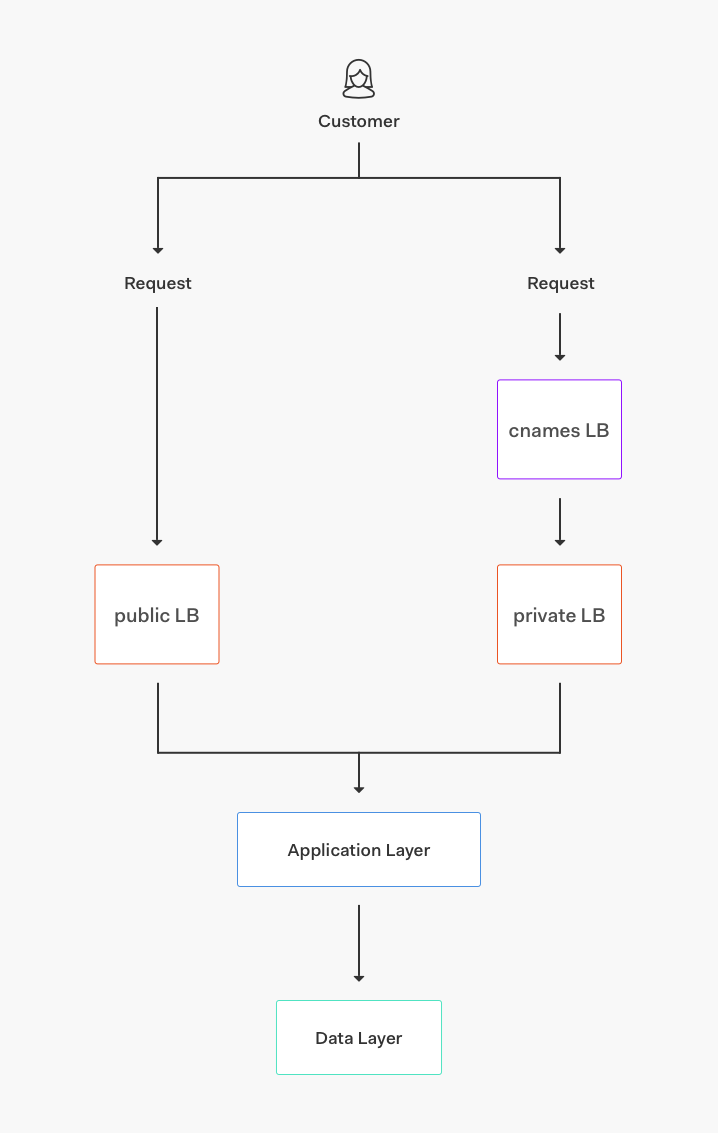 The core service is composed of different layers:

In 2014 we used a multi-cloud architecture (using Azure and AWS, with some extra resources on Google Cloud) and that served us well for years. As our usage (and load) rapidly increased, we found ourselves relying on AWS resources more and more.

At first, we switched our primary region in our environment to be in AWS, keeping Azure as failover. As we began using more AWS resources like Kinesis and SQS, we started having trouble keeping the same feature set in both providers. As our need to move (and scale) faster grew, we opted to keep supporting Azure with a limited feature parity: if everything went down on AWS, we could still support core authentication features using the Azure clusters, but not much of the new stuff we had been developing.

After some bad outages in 2016, we decided to finally converge on AWS. We stopped all efforts related to keeping the services and automation platform-independent and instead focused on:

Let's take a look at our US environment architecture, for instance. We have this general structure:

And this is the structure inside a single AZ: 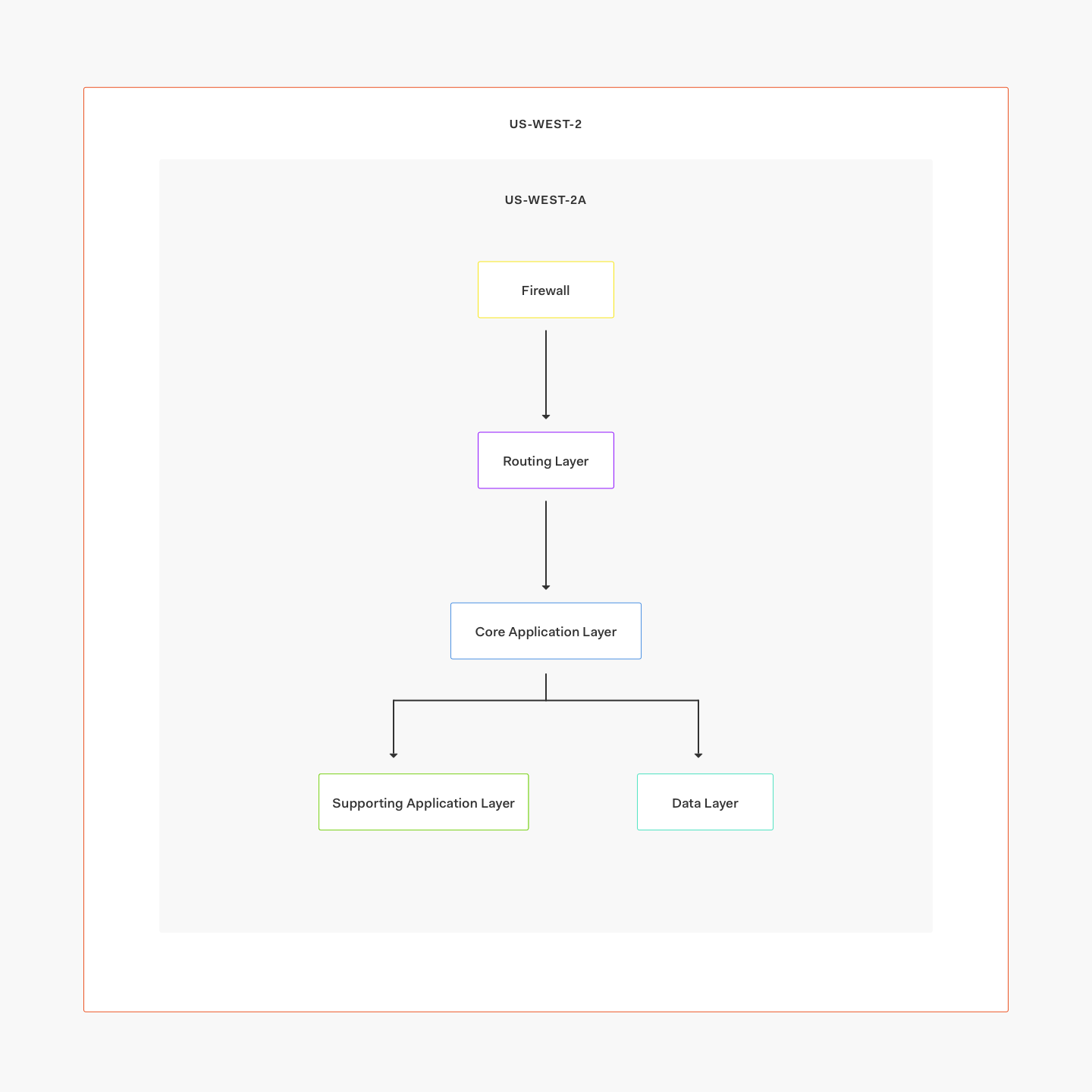 In this case, we use two AWS regions: us-west-2 (our primary) and us-west-1 (our failover). Under normal circumstances, all requests will go to us-west-2, being served by three separate availability zones.

This is how we achieve high availability: all services (including databases) have running instances on every availability zone (AZ). If one AZ is down due to a data center failure, we still have two AZs to serve requests from. If the entire region is down or having errors, we can update Route53 to failover to us-west-1 and resume operations.

We have different maturity levels for service failover: some services, like user search v2 (that builds a cache on Elasticsearch) might work but with slightly stale data; still, core functionality keeps working as expected.

In the data layer, we use:

We exercise failover at least once per year, and we have playbooks and automation to help new infrastructure engineers get up to speed on how to do it and what are the implications.

Our deployments are usually triggered by a Jenkins node; depending on the service we either use Puppet, SaltStack, and/or Ansible to update individual or groups of nodes, or we update our AMIs and create new autoscaling groups for immutable deployments. We have different types of deployments for new and old services, and this has been shown to be largely ineffective as we need to maintain automation, docs, and monitoring for something that should be unified.

We are currently rolling out blue/green deployments for some of the core services, and we intend to implement the same for every core and supporting service.

Besides unit test coverage on every project, we have multiple functional test suites that run in every environment; we run it on a staging environment before we deploy to production, and we run them again in production after finishing a deployment to ensure that everything works.

"Besides unit test coverage on every project, we have multiple functional test suites that run in every environment: staging before deploying to production and again in production after finishing deployment."

Until 2017 we ran our own, custom-built CDN using NGINX, Varnish, and EC2 nodes in multiple regions. Since then, we transitioned to CloudFront, which has given us several benefits that include:

There are a few downsides, like the fact that we need to run Lambdas to perform some configurations (like adding custom headers to PDF files and things like that). Still, the upsides definitely make up for that.

One of the features we provide is the ability to run custom code as part of the login transaction, either via authentication rules or custom database connections. These features are powered by Extend, an extensibility platform that grew out of Auth0 and is now being used by other companies as well. With Extend, our customers can write anything they want in those scripts and rules, allowing them to extend profiles, normalize attributes, send notifications, and much more.

We have Extend clusters specifically for Auth0; they use a combination of EC2 auto-scaling groups, Docker containers, and custom proxies to handle requests from our tenants, processing thousands of requests per second and responding fast to variations of load. For more details about how this is built and run, check out this post on how to build your own serverless platform.

We use a combination of different tools for monitoring and debugging issues:

The vast majority of our alerts come from CloudWatch and DataDog.

We tend to configure CloudWatch alarms via TerraForm, and the main monitors we keep on CloudWatch are:

CloudWatch is the best tool for alarms based on AWS-generated metrics (like ones from load balancers or autoscaling groups). CloudWatch alerts usually go to PagerDuty, and from PagerDuty to Slack/phones.

DataDog is a service we use to store and act on time-series metrics. We send metrics from Linux boxes, AWS resources, off-the-shelf services (like NGINX or MongoDB), and also custom services we have built (like our Management API).

We have many DataDog monitors. A few examples:

As you can see from the examples above, we have monitors on low-level metrics (like disk space) and high-level metrics (like MongoDB replica-set change, which alerts us if there was a change in the primary node definition, for example). We do much more and have some pretty sophisticated monitors around some services.

DataDog alerts are pretty flexible in their outputs and we usually send them all to Slack, sending to PagerDuty only those who should "wake people up" (like spikes of errors, or most things that we are sure that are having an effect on customers).

For logging we use Kibana and SumoLogic; we are using SumoLogic to record audit trails and many AWS-generated logs, and we use Kibana to store application logs from our own services and other "off-the-shelf" services like NGINX and MongoDB.

Our platform evolved quite a bit in order to handle the extra load and the huge variety of use cases that are important to our customers, but we still have more room for optimizations.