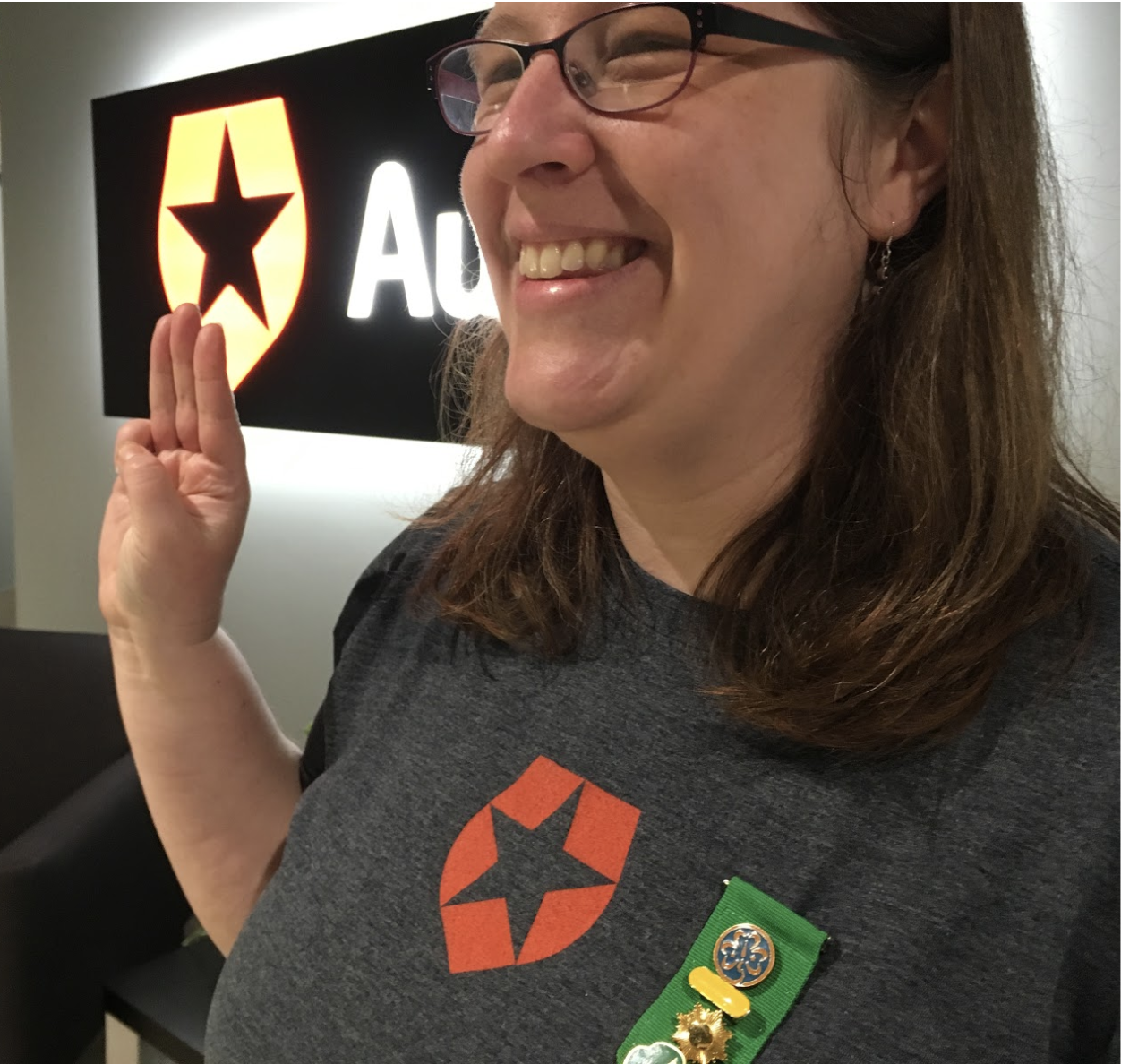 Girl Scouts can earn cybersecurity badges! After learning about some scouts who got theirs with the help of the University of Alabama, we put out an all-call on Slack to see if anyone knew of a troop that might want some help from Auth0. Turns out that one of our own, Support Operations Manager Abigail Sanchez is not only a troop leader but also a Gold Girl Scout (the male equivalent would be an Eagle Scout) with 25 years of scouting experience.

Crediting Girl Scouts with helping her succeed in tech, Abigail agreed to bring in her troop and tell us about how her scouting experience laid the groundwork for her career.

“There's a lot of stuff that I feel like I sneakily learned through Girl Scouts,” says Abigail, noting that the project proposal like the one she wrote to become a Gold Scout is something she’s continued to prepare throughout her career. Scout gatherings similarly prepared her for her first professional conferences through familiarity, making her comfortable picking which sessions to attend, as well as being prepared for awful hotel food.

Alongside seeing examples of women running events for “hundreds” of scouts at all-girl events, the exposure made a difference. Scouts also took Abigail to various career events. “They would have sessions about being a scientist or working on computers. And those were right alongside being a teacher or a nurse or the stereotypical female careers. So again, it just never occurred to me that it was any different. It just kind of broke down that barrier, and that's what I'm really hoping to do with my girls.”

Scouts helped build self-confidence that withstood a 3-to-1 male-to-female ratio in schools and early career moments “when it seemed like my male counterparts were surprised when I did things correctly.”

Auth0 and Girl Scouts share similar values, says Abigail. “Girl Scouts is famous for not excluding any female. They are very clear about that and they stand by that. Any religion, any sexual orientation, or physical anatomy, whatever. If you identify as a woman, you are welcome in Girl Scouts. I feel like Auth0 is the same way, very inclusive We are heavily male, but we come from lots of different countries and, like Girl Scouts, we share the belief that that diversity is what makes us strong.”

Every day, Abigail thinks about the Girl Scout Promise (updated since her mother was a girl scout): “On my honor, I will try.” This idea of not giving up, of trying and experimenting, is also expressed daily at Auth0 along with the Scout value of responsibility, Abigail says. “You're going to try, and you might fail, and that's good, and you move on, but you're responsible for what you say and do. And you know, I think that goes with the Auth0 value of being transparent and being respectful with people.”

Working with Abigail’s Girl Scout troop, we had several goals given that we're catching these girls probably before they've ever created their own password. “I'm just hoping that we're going to instill some actual practical things that are going to keep them safe. But on a grander scheme, I want them to have that same kind of feeling that I did, that any of these jobs are possible for them. I'm hoping with both Girl Scouts and this specific experience of going to Auth0 to see those values in action.”

"\"[Girl Scouts] would have sessions about being a scientist or working on computers…It just kind of broke down that barrier, and that's what I'm really hoping to do with my girls,\" says @auth0 @abdeansan"

Want to run your own company? 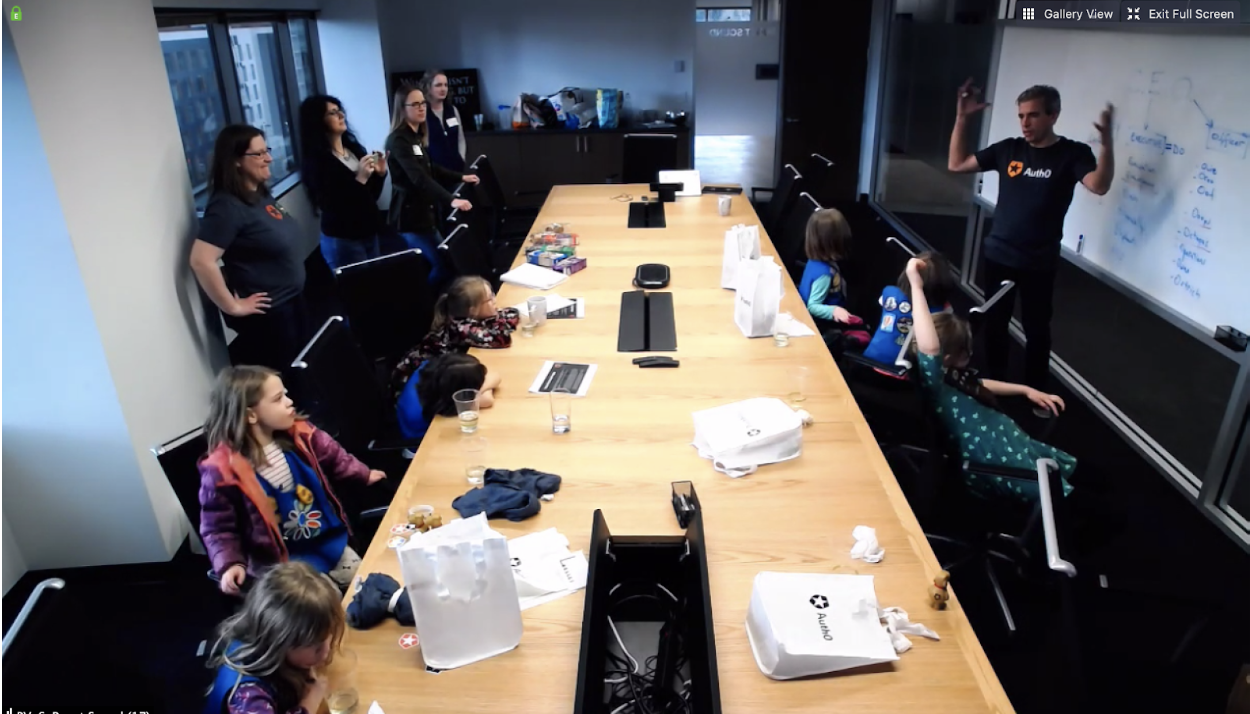 How would you define CEO?

On International Women’s Day, Auth0 CEO and co-founder Eugenio Pace explained what we do here at Auth0 and led the girls through an exploration of how a CEO spends his or her time by guessing at the meaning of each letter in the acronym (our favorites: Caring Elf Operations and Community Emergency Octopus).

During the session, co-founder and CTO Matias Woloski dropped by to ask the girls if any of them wanted to start their own company as he and Eugenio did. Girl Scout Charlie explained that she did, but unlike Eugenio and Matias, she didn’t want to start it with a friend, she wanted to start a video game company with her father. 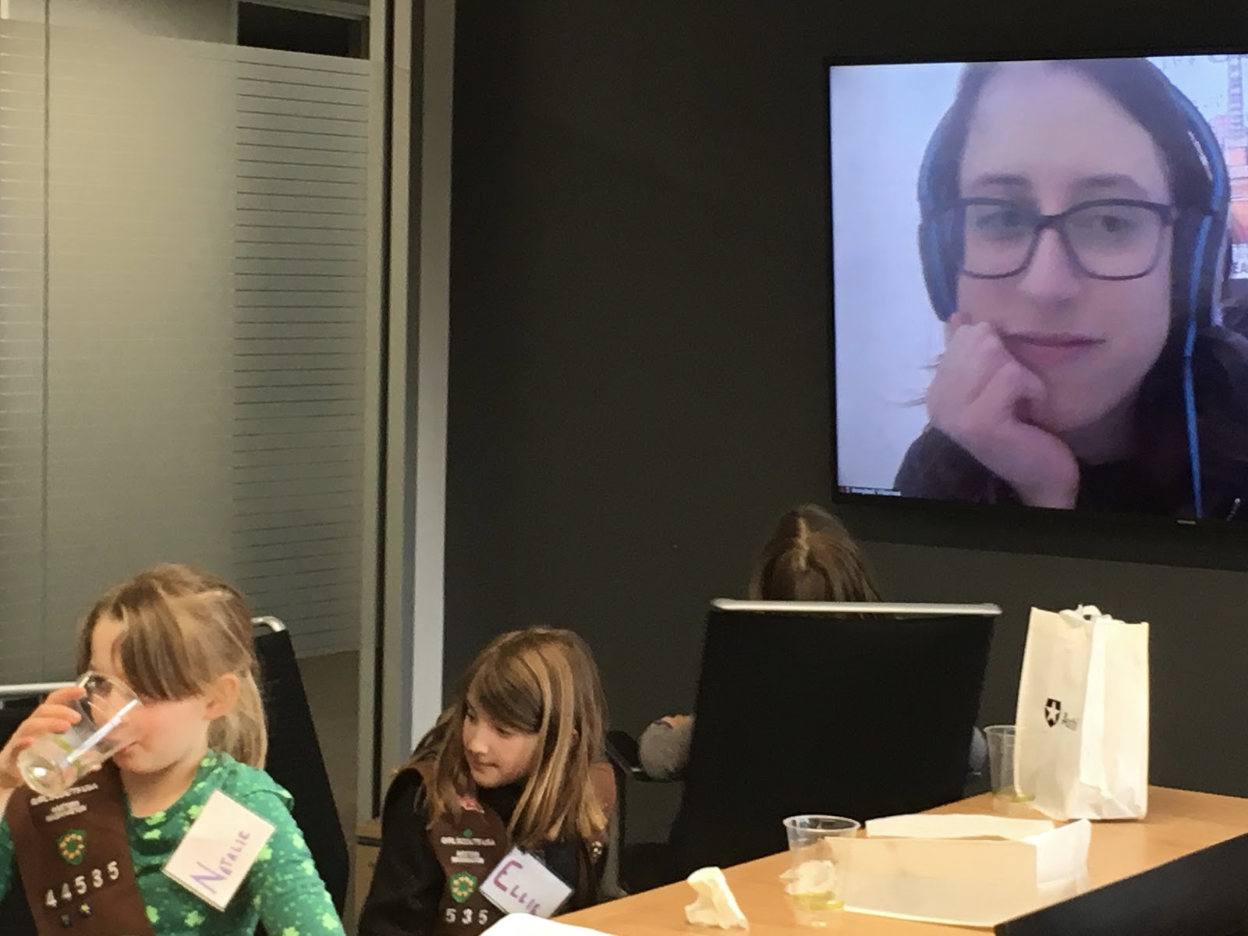 Since 80% of people 18 and older reuse passwords, we figured making the idea of password hygiene concrete might be a good place to start. But first Security Operations Manager Annybell Villarroel signed on via Zoom from Madrid, Spain, giving the girls a feel for what it is like to work for a globally distributed company. Annybell’s “Cybersafe Camp” interactive presentation inspired understanding with examples from Ralph Breaks the Internet and tales of her own security heroes (like Google’s Security Princess Parisa Tabriz) as well as a detailed list of items the girls should protect like: 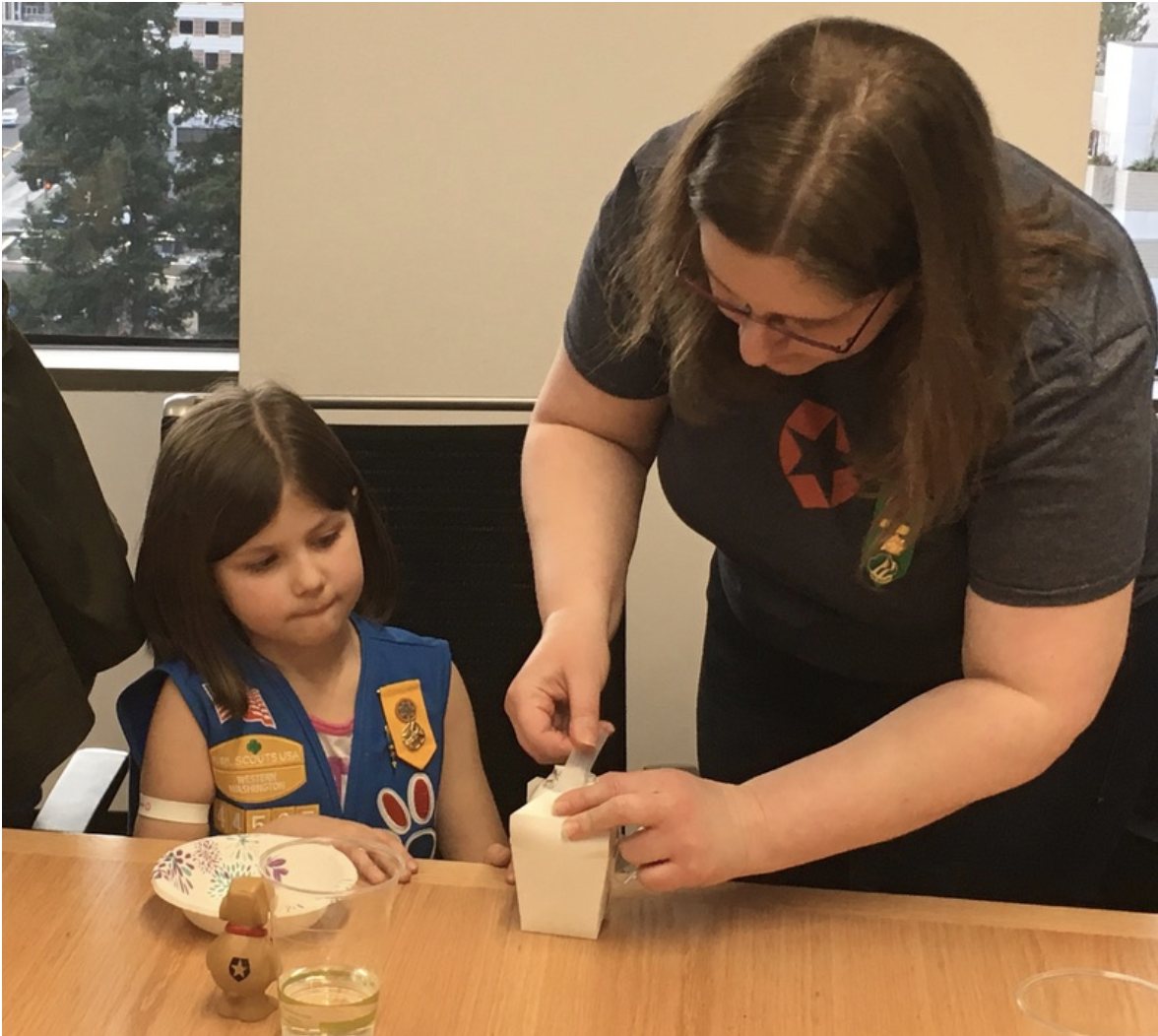 Adding the last layer of security.

As mentioned earlier, password habits are rough for adults, so we decided to make the risks concrete with some eggs, newspaper, bubble wrap, boxes, and gravity.

While Abigail explained the need to protect your secret password, the girls decorated eggs to represent their unique identity. They wrapped the eggs in bubble wrap and newspaper, then put them in takeout cartons, and sealed them with tape. We then very carefully moved to the kitchen to see if their unique identities would be properly protected against an attack by the hacker gravity.

“If the egg breaks, hackers get the information which is the egg yolk,” explained Girl Scout Natalie. 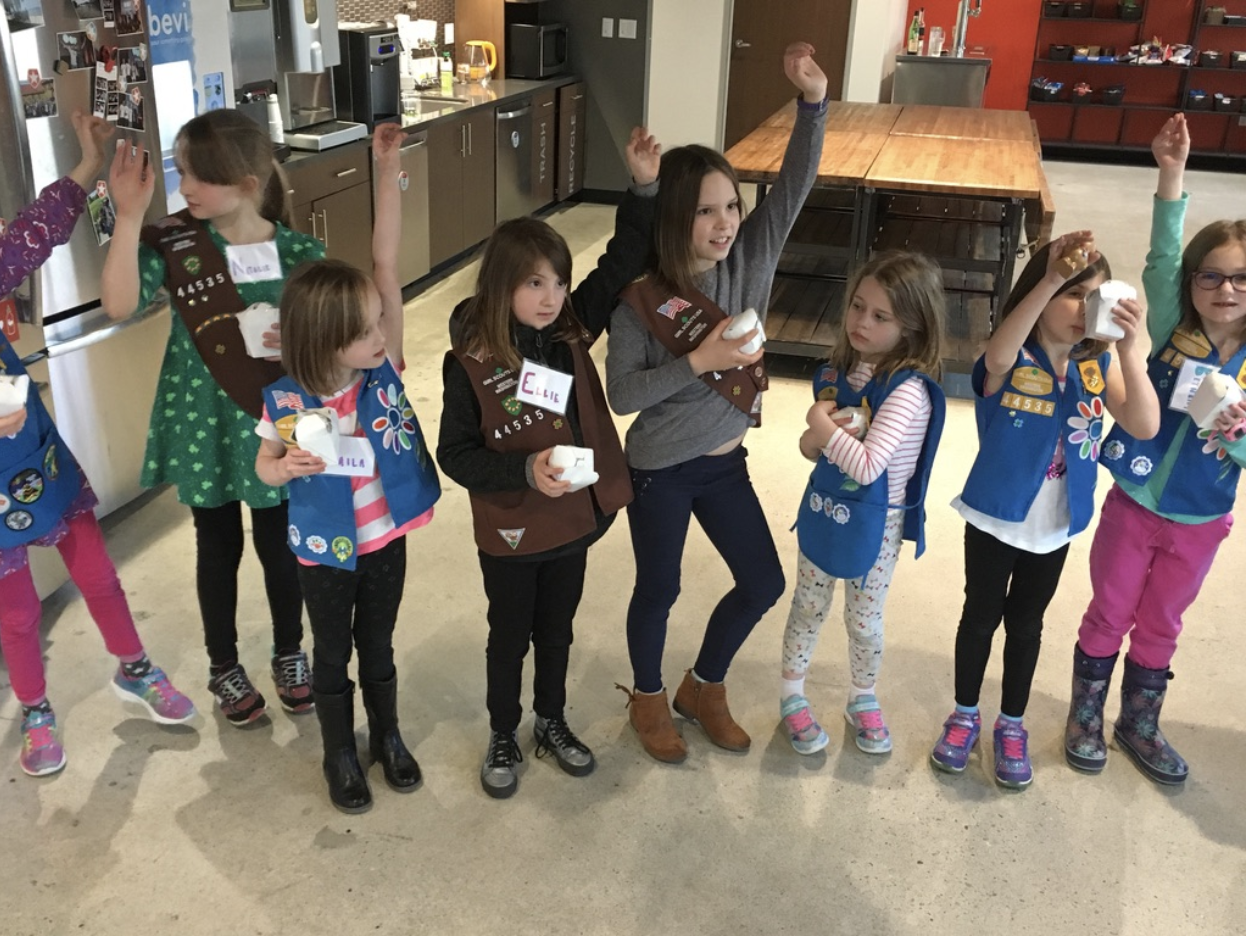 Just before testing the strength of the egg passwords.

"If the egg breaks, hackers get the information which is the egg yolk, explained Girl Scout Natalie (speaking about the Auth0 identity egg exercise)." 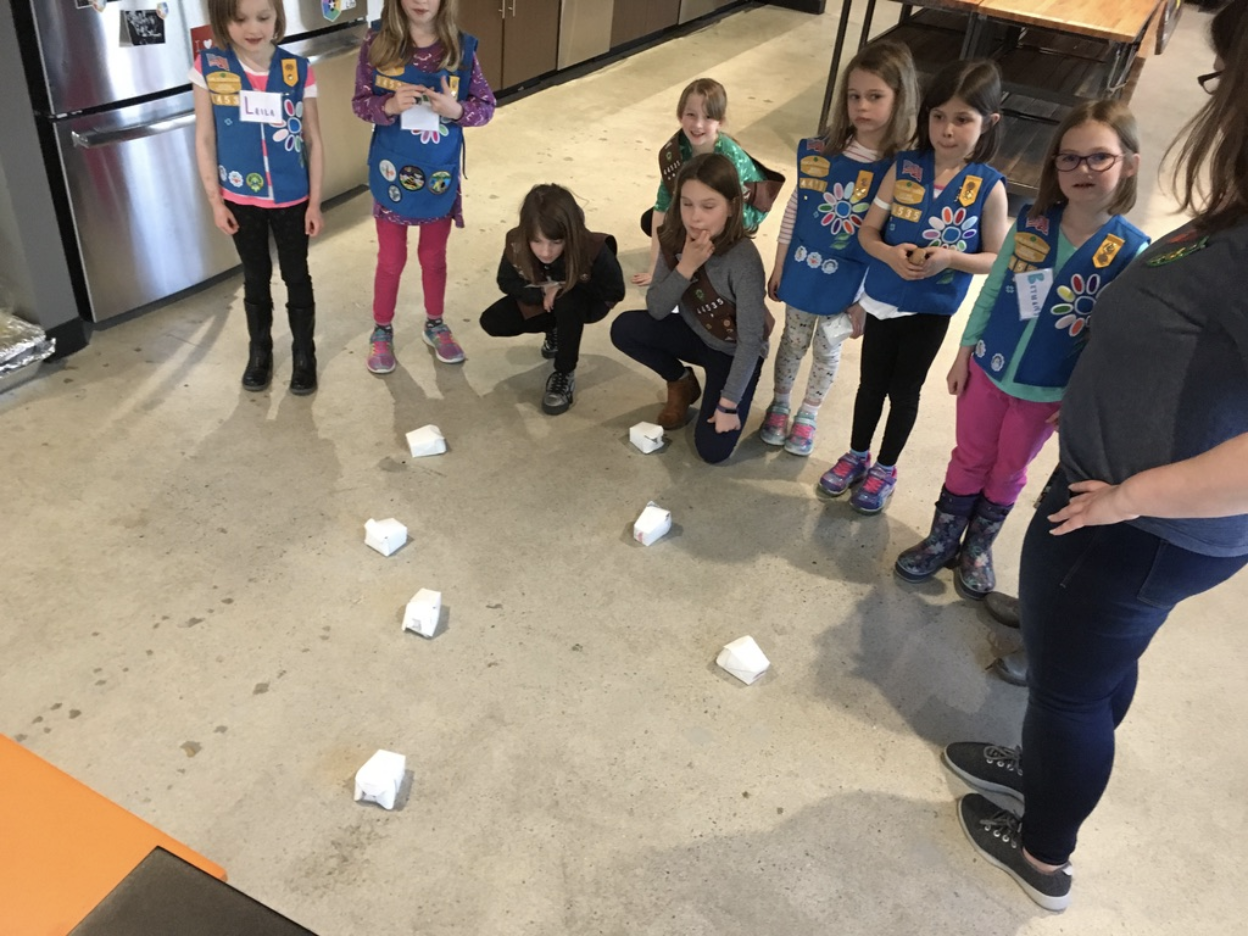 The passwords appear secure, but are they?

Not every egg made it. Some Scouts lowered risk by not dropping at all — essentially avoiding the internet altogether. Eggs fall every day in the form of hack attacks and breaches. Choosing to avoid certain sites makes sense for safety, with precautions, the girls (and all of us) should be able to safely navigate the interwebs. 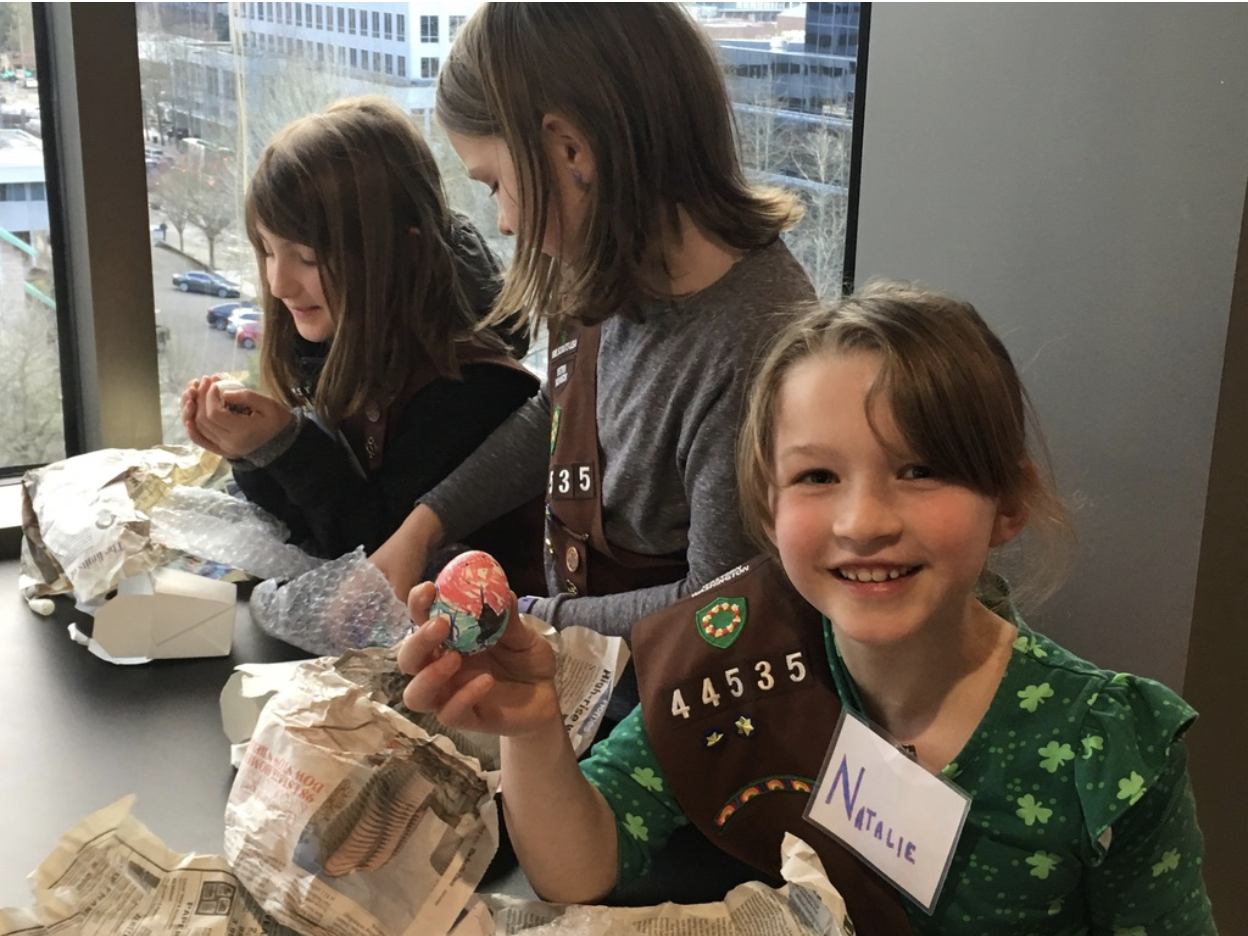 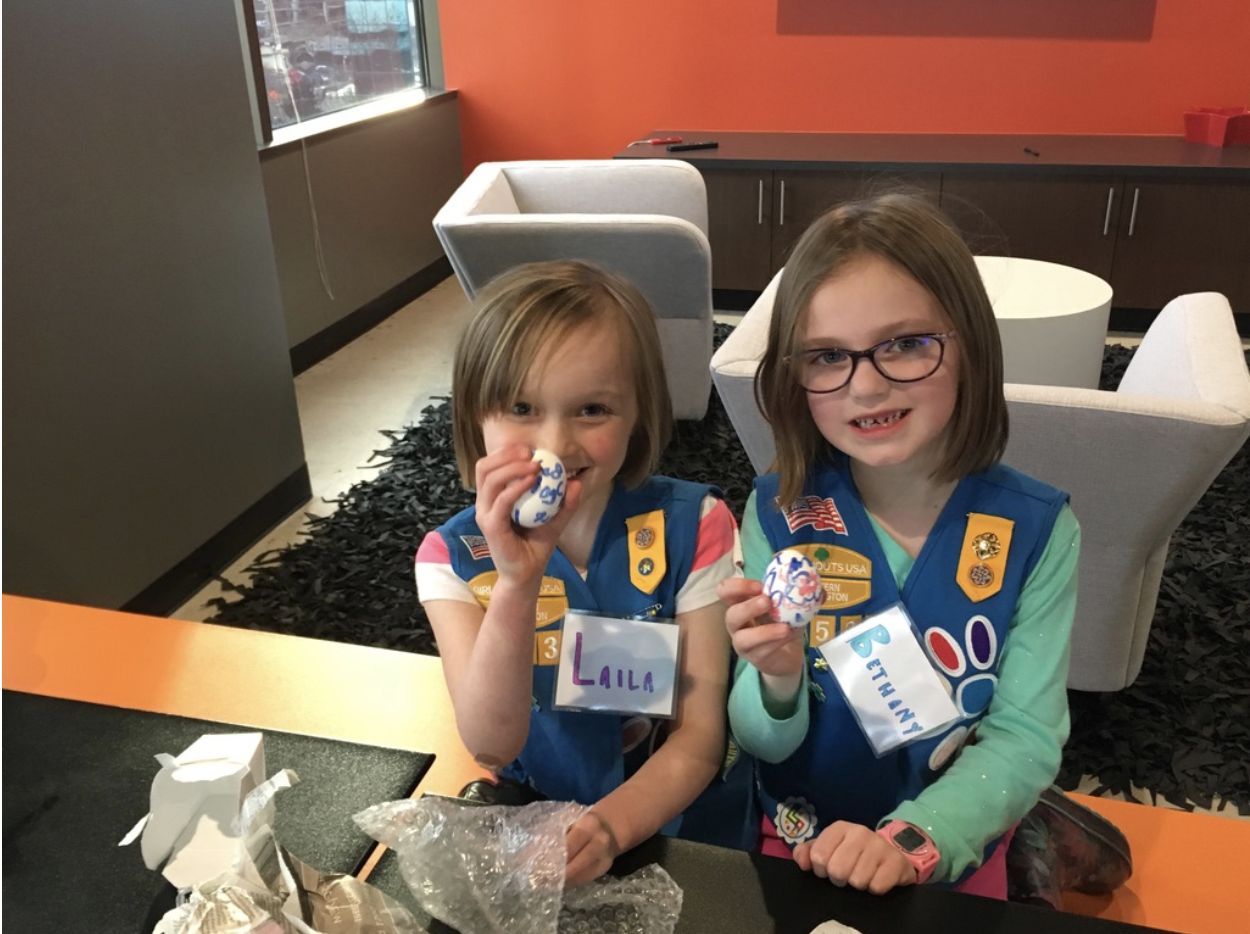 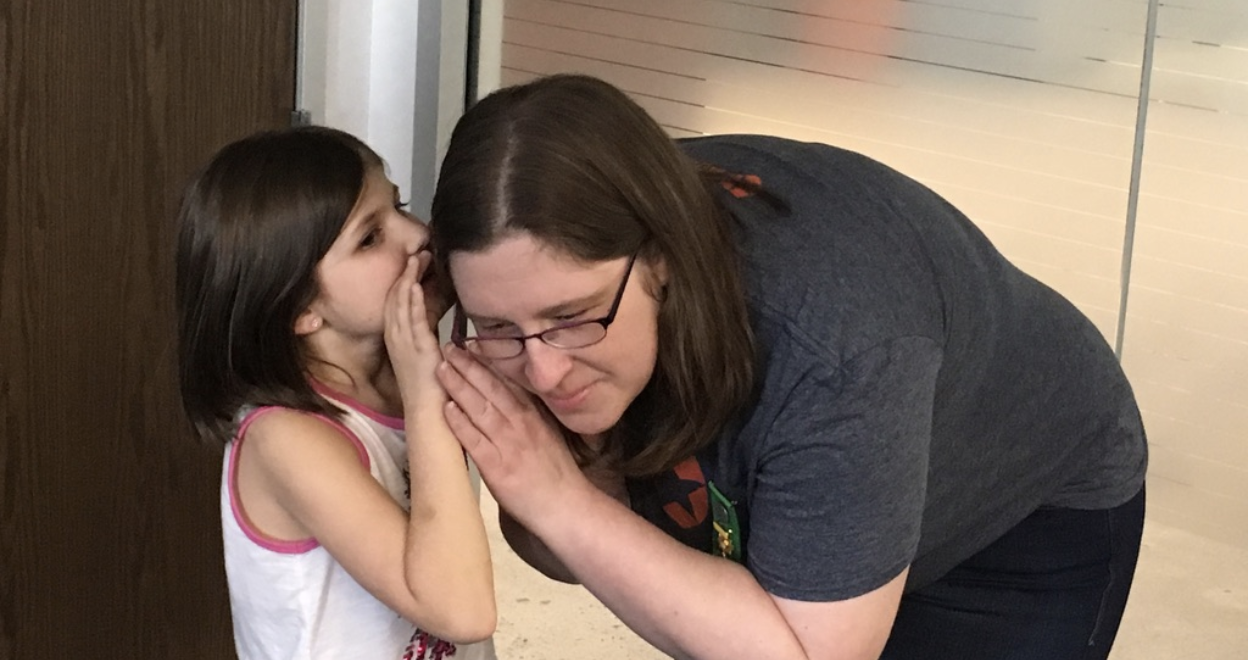 Maybe you remember the old game of telephone, where you try to whisper a message and keep it from changing as it gets passed around the room? Well, we played this game to show how computers are connected and demonstrate how the girls might recognize social engineering if the messages changed or started in unusual ways (Natalie usually sends a heart emoji to Charlie, but this time she sends a spider and Natalie doesn’t like spiders).

After a few rounds of playing computers passing along the message, the girls quickly realized how easy it was for the information to change by “hacking” it with a few words. 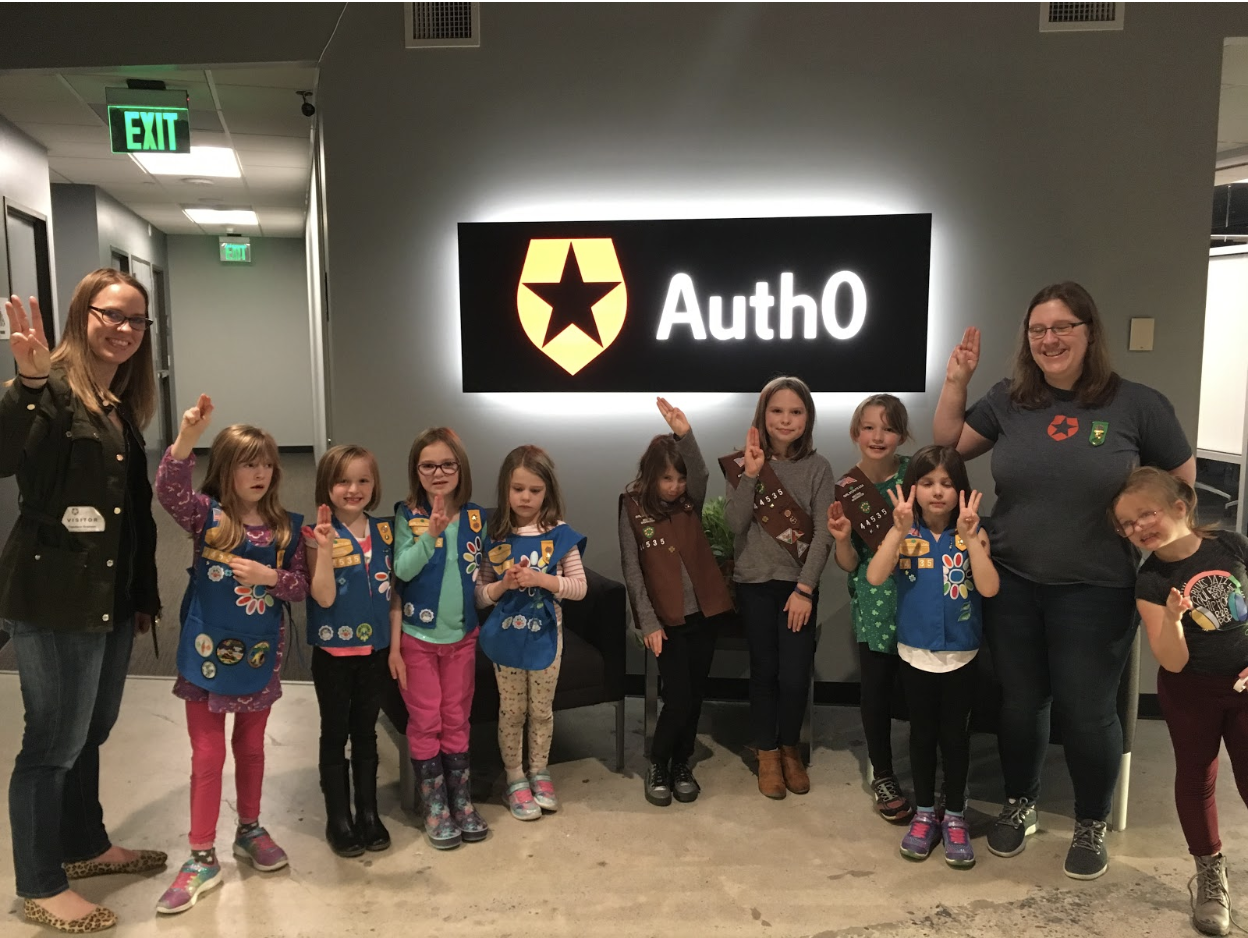 We wrapped the day with a photo opp. On the way home, the girls were overheard explaining the difference between malicious hackers and ethical hackers. Initial cybersecurity install successfully completed!

Would you like Auth0 to help your Girl Scout troop get their cybersecurity badges? Please reach out to abigail.sanchez@auth0.com.