If you want attention, you could do worse than getting big names like Google, Amazon, Apple, and Netflix into headlines.

We’ve seen France’s data authority, CNIL, level €50 million in fines at Google for violating the General Data Protection Regulation (GDPR) thanks to a Not Your Own Business (NOYB) and La Quadrature du Net filing. NOYB, the nonprofit European center for digital rights, filed a fresh suit against eight major tech players (see chart below). Max Shrems, NOYB Director, also sank the U.S. Safe Harbor law and challenged Privacy Shield and still has additional projects in play. While not every company is a Google or an Amazon, these fines establish precedence that can easily be applied to other organizations.

Every day plenty of scare tactics and odd products (like GDPR shredders and recycling bins marked “confidential”) likely land in your inbox under the guise of GDPR compliance. But now that we’re seeing major fines, we thought it was time to take a realistic look at data privacy impacts companies can expect as they move through 2019 and prep for 2020. 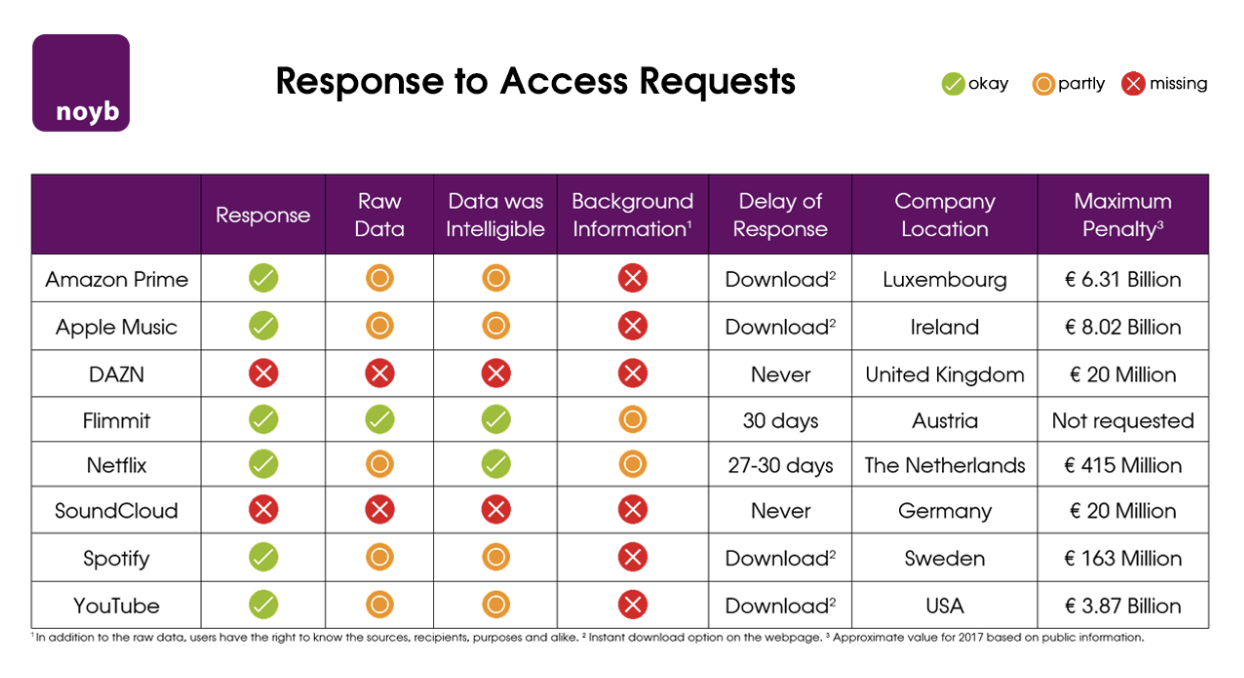 "A realistic look at data privacy impacts companies can expect as they move through 2019 and prep for 2020."

EDITOR’S NOTE: Each regulation/law has minimum sizes for impacted organizations. Please check each for specific details.

"The shift from legal to technical data privacy compliance — and how you can mitigate increasing consequences."

What is Acting in ‘Good Faith?’

GDPR and other data privacy fines aren’t leveled automatically with each violation. The bodies have leeway to weigh whether or not an organization was “acting in good faith.” Whether or not the deciding bodies have an understanding of all that goes into being compliant can be debated, but they do get that, for many organizations, compliance can be a massive undertaking.

As legislators move towards increasing consequences for putting personal data at risk, what does “acting in good faith” look like? As we moved toward the deadline for GDPR in 2018, many companies handed GDPR to their legal teams to interpret the regulation in the absence of precedence, taking a “wait-and-see” approach by making the minimal necessary tech investments towards compliance.

Meanwhile, 2018 saw breaches from a host of big brands and lots of talk about the need for additional data privacy laws. Comments from Forrester on the Marriott Mega-Breach lend insight into why the global public and legislators are losing patience: “As the case has been for nearly every other mega-breach in recent history, the methods that the attackers used to exploit this system weren’t magic or exceedingly advanced. Basic database security protocols, good authentication, minimization of lateral movement, and an understanding of how to apply technology strategically would have made a big difference.”

Paralleling the breach consequences of missing the basics are companies that are perceived to be taking advantage of their customers. CNIL’s €50 million GDPR fine against Google wasn’t for a minor violation. The finding cited Google’s violation of transparency, information, and consent. “The violations are continuous breaches of the Regulation as they are still observed to date. It is not a one-off, time-limited, infringement,” CNIL wrote in the filing.

And older data laws can have current implications. Illinois’ Biometric Information Privacy Act (BIPA) says that individuals have the right to control their biometric information: fingerprints, iris scans, etc. A lawsuit started in 2014 found that Six Flags Amusement Park cannot collect thumbprints without consent, upholding what Gizmodo called one of the most “rigorous” data laws in the United States.

In this current environment of consequences, moving from legal-focused compliance to addressing the legacy technical challenges involves assessing risk and deciding how to manage it.

In 2018, Ponemon reported that data breaches averaged $3.86 million with mega-breaches (defined as greater than 1 million records) costing companies nearly $40 million. But that was before GDPR and its 72-hour reporting requirement. Calculating the potential cost of a breach has become more complex (Although recent news that Twitter is being investigated regarding its Jan. 8, 2019 breach notification may set precedence.

Now says Ian Thornton-Trump, head of cybersecurity, AMTrust International, speaking with Bank Info Security, we’re seeing a body with broad authority level fines. The ICO can refer companies for potential criminal charges if they notice something during their full access to company records during an investigation. Shorthand? Breaches are likely to become more expensive.

And there’s some question over whether or not English law permits insurance companies to cover fines leveled under GDPR because in some instances, the breach/lack of compliance may prove to be “quasi-criminal,” says The National Law Review.

What You Can Do About It

Investigations from a variety of regulatory agencies and insurance companies and class-action lawsuits can mean that a company may see financial and brand impacts from five or six investigations, says Thornton-Trump, but it may take years to play out. Meanwhile, your company’s tech team will likely have moved through multiple tech lifecycles.

Ransomware, breaches, compliance issues all add complexity to an already challenging process, but they also provide concrete reasons to justify preventative measures as well as cleanup costs. Merck, for example, says Thornton-Trump, rebuilt their entire network for $250 million after facing down WannaCry Ransomware.

If you’d like to learn how streamlining identity can help support your ongoing data privacy efforts, please reach out to sales@auth0.com.