TL;DR: Module Federation allows loading Micro Frontends at runtime. Common dependencies like Angular or the Auth0 library can be shared and hence don't need to be loaded several times. This is also the key for sharing data like the current user or global filters.

Recently, there have been a lot of discussions about Micro Frontends. The underlying idea is quite tempting: Splitting a huge software system into smaller parts and assigning each part to an individual team:

As these teams are -- more or less -- autonomous, they can work in a more flexible way and don't need to coordinate that much with others. This shows that Micro Frontends are mostly about scaling teams. Hence, if you don't have several frontend teams, Micro Frontends might be overkill.

Splitting software systems into several parts is, however, only one side of the coin. Even though we developers might like this idea, the users don't! They aren't interested in starting several frontends but expect an integrated solution.

For instance, the example used here mimics a simple shopping system. One of its micro frontends deals with shipping: 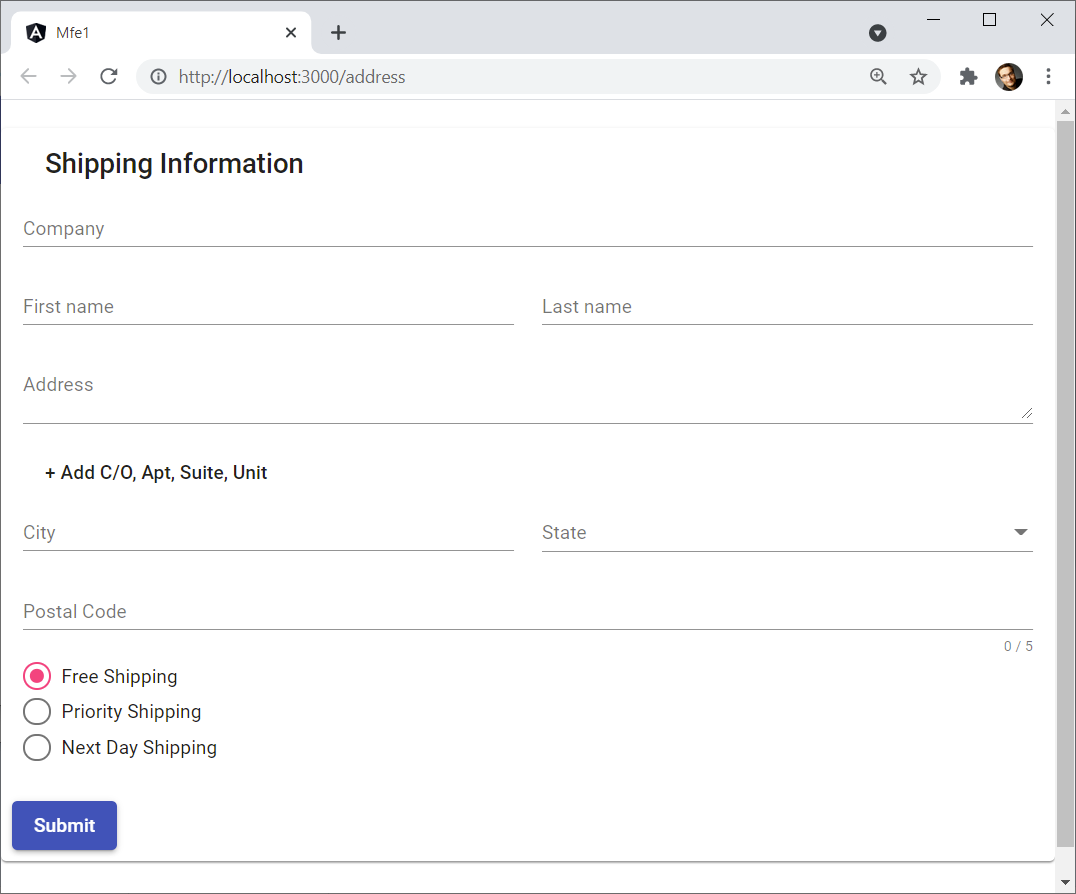 For the purpose of integration, this micro frontend needs to be loaded into a shell: 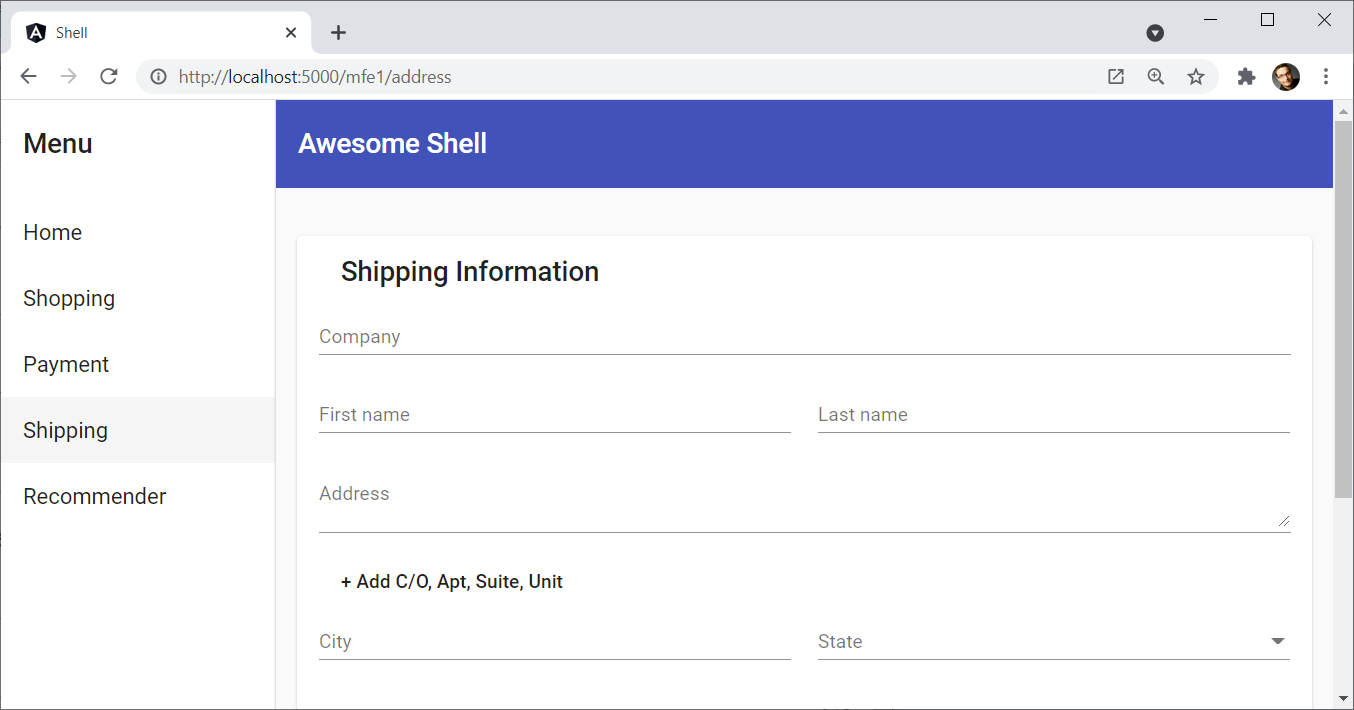 The shell loads this but also other micro frontends on demand.

For such an implementation, you needed a lot of tricks in the past. Fortunately, Module Federation makes this task straightforward.

Module Federation is an integrated part of webpack 5, and hence, it works with all modern web frameworks. Also, as webpack is highly used in nearly all communities, Module Federation immediately becomes a widespread solution.

In our case, the host is the shell, while the remote is the micro frontend. Both can be configured with their webpack configurations.

The host defines virtual URLs pointing to remotes. In the previous picture, for instance, the URL mfe1 pointing to a micro frontend, also called mfe1, is defined.

The remote, in turn, exposes files -- or, to be more precise: EcmaScript modules -- for the host. To prevent that, the latter one needs to know the remote's file structure; exposed files can get a shorter alias. The example in the last picture goes with the alias Cmp.

Exposed EcmaScript modules can easily be loaded into the host by using a dynamic import together with the mapped URLs and defined aliases. The best: From Angular's perspective, this is just like lazy loading.

As Angular doesn't even recognize that the application loads a micro frontend, we can use it exactly as it was intended to be used. We don't need any tricks or meta frameworks orchestrating different SPAs in our browser window. This eases our endeavor dramatically.

Since version 12, the Angular CLI uses webpack 5. Hence, we also get Module Federation out of the box. To activate it, we need a custom builder that, e. g. ships with the community solution @angular-architects/module-federation. As it comes with respective schematics, you can easily ng add it to your CLI workspace: 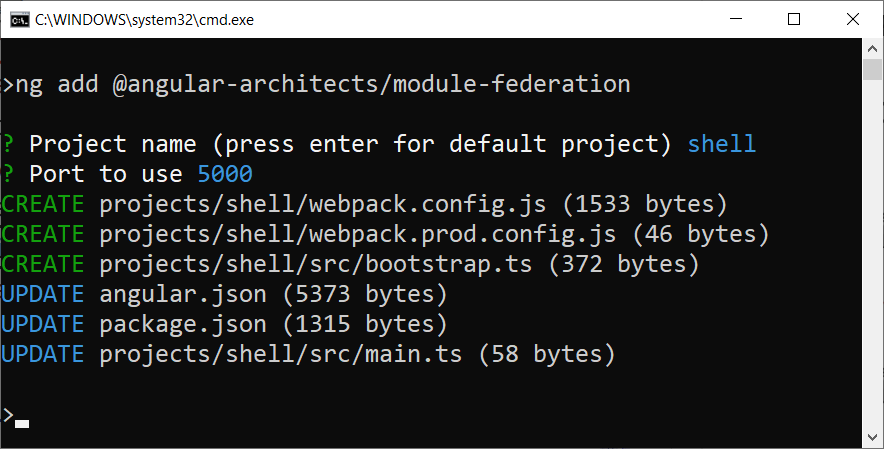 The well-known CLI extension Nx is supported too. The schematic asks about the name of the project in your workspace you want to enable module federation for. Also, it asks which port to assign for ng serve.

After that, it generates several files, e. g. a partial webpack configuration we need to adjust for our needs. Also, it registers the custom builder in our angular.json.

For the example used here, I ran this command twice: Once for the shell and once for the above-shown shipping micro frontend. The latter one is just called mfe1 here.

Let's start with the configuration for the micro frontend:

The property name is normally the project name and should be unique across all micro frontends. The filename points to a file webpack generates when building the project. It's often referred to as the remote entry point. This JavaScript file provides all the metadata the shell needs to know for loading the micro frontend.

While normally you can go with the generated values for name and filename, you very likely need to adjust the exposes section. As discussed above, it contains the aliases for the files to expose.

With shared, you define all the npm packages you want to share across the shell and the micro frontends. These packages are only loaded once at runtime. This is vital because having ten micro frontends doesn't mean you want to load Angular or other packages ten times!

Of course, when sharing packages at runtime, we might end up with version conflicts. Fortunately, Module Federation also got us covered here: It provides several strategies for dealing with version mismatches.

In our case, the combination of singleton: true and strictVersion: true is used. Hence, only one version of the shared packages is allowed, and if Module Federation detects several versions at runtime, it throws an Error. While this seems to be quite harsh at first sight, it allows our integration tests to immediately find out about version mismatches.

More details on strategies for preventing version mismatches can be found here.

Besides singleton and strictVersions, there are two further properties used: requiredVersion and includeSecondaries. If we set the first one to auto, @angular-architects/module-federation assumes the version found in your project's package.json. This avoids several pitfalls.

The option includeSecondaries is provided by @angular-architects/module-federation too. It automatically adds all secondary entry points to the list of shared libraries. In the case of libraries like Angular Material, this saves you a lot of typing as they provide one such entry point per component, e. g. @angular/material/input or @angular/material/button.

Now, let's have a look at the exposed AddressModule:

As you see, it's just an ordinary Angular module. However, as it has child routes, we can immediately route to them after loading the whole module into the shell.

The shell's webpack.config.js is a bit simpler. Here, we only need to define the shared libraries:

In addition, we also could map URLs here, as outlined above. This would look like this:

As the TypeScript compiler doesn't know the file mfe1/Module, we also needed a type definition. For this, we could create an arbitrary with the ending .d.ts:

However, while mapping URLs this way is simple, it also requires us to know about the micro frontends and their locations upfront. Hence, I'm using a more dynamic approach that does not demand us to define URLs for compile time.

Instead, we can tell Module Federation about possible Micro Frontends at runtime. To make use of it, I use the helper function loadRemoteModule provided by @angular-architects/module-federation together with lazy routes:

The loadRemoteModule function takes the location of the remote entry point, the remote's name, and the alias of the exposed EcmaScript module. All these values are defined in the micro frontend's webpack configuration.

As these properties are just strings, we could even retrieve their values from a configuration file or from a service endpoint.

After starting both projects, e. g. with ng serve shell, and ng serve mfe1, we can use the lazy route shown above to load the micro frontend into the shell. It's also interesting to inspect the loaded files in your browser's dev tools: 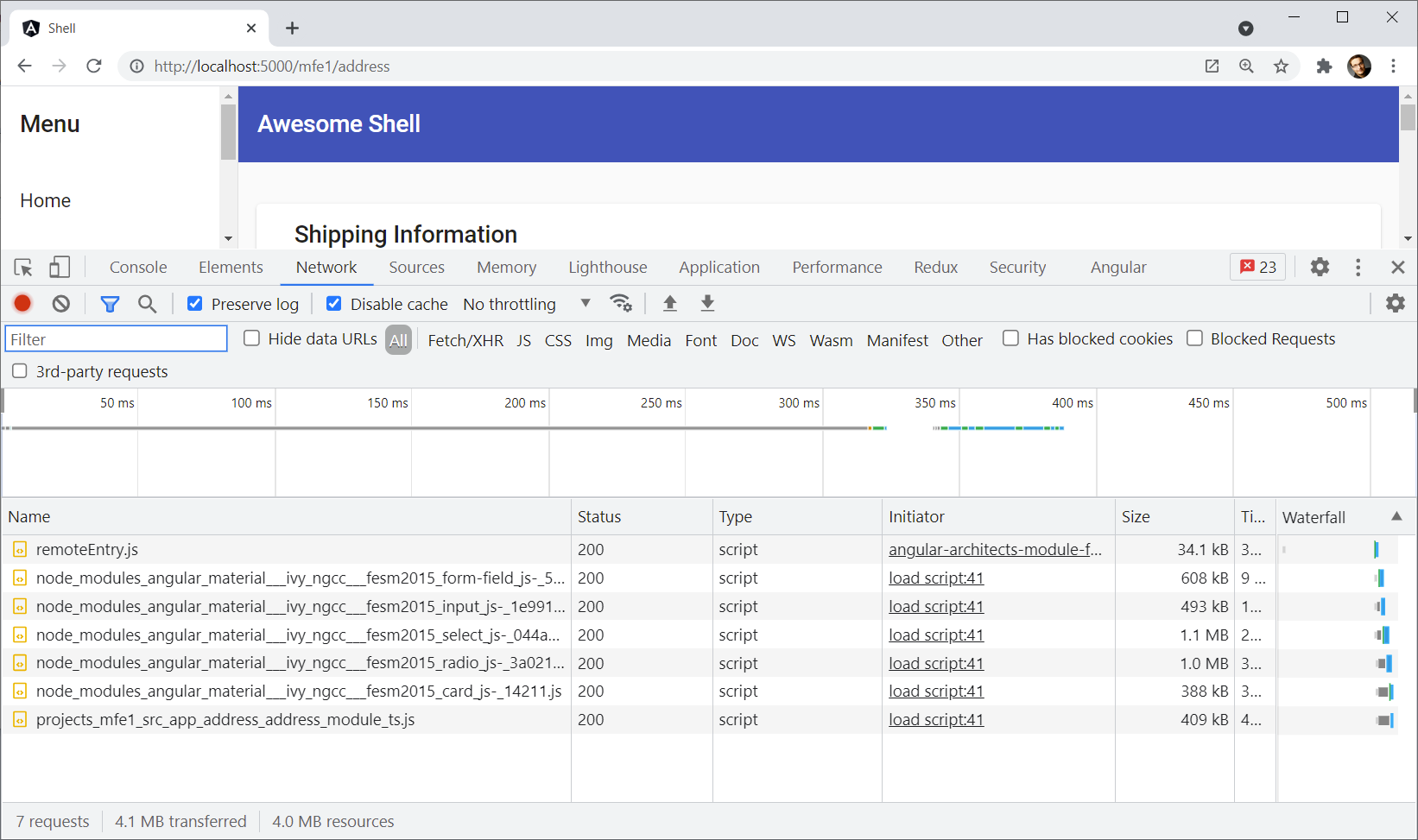 At first sight, it really looks like lazy loading. However, when looking more closely, we see that the lazy chunks come from the micro frontend's origin. Also, for all the shared libraries, a bundle of its own is loaded. This is necessary because the module federation decides at runtime when to load which shared package.

Sometimes we need to share some information between micro frontends and the shell, e. g. context information like the current user or global filters like the selected customer. The example used here allows logging in the user via the shell: 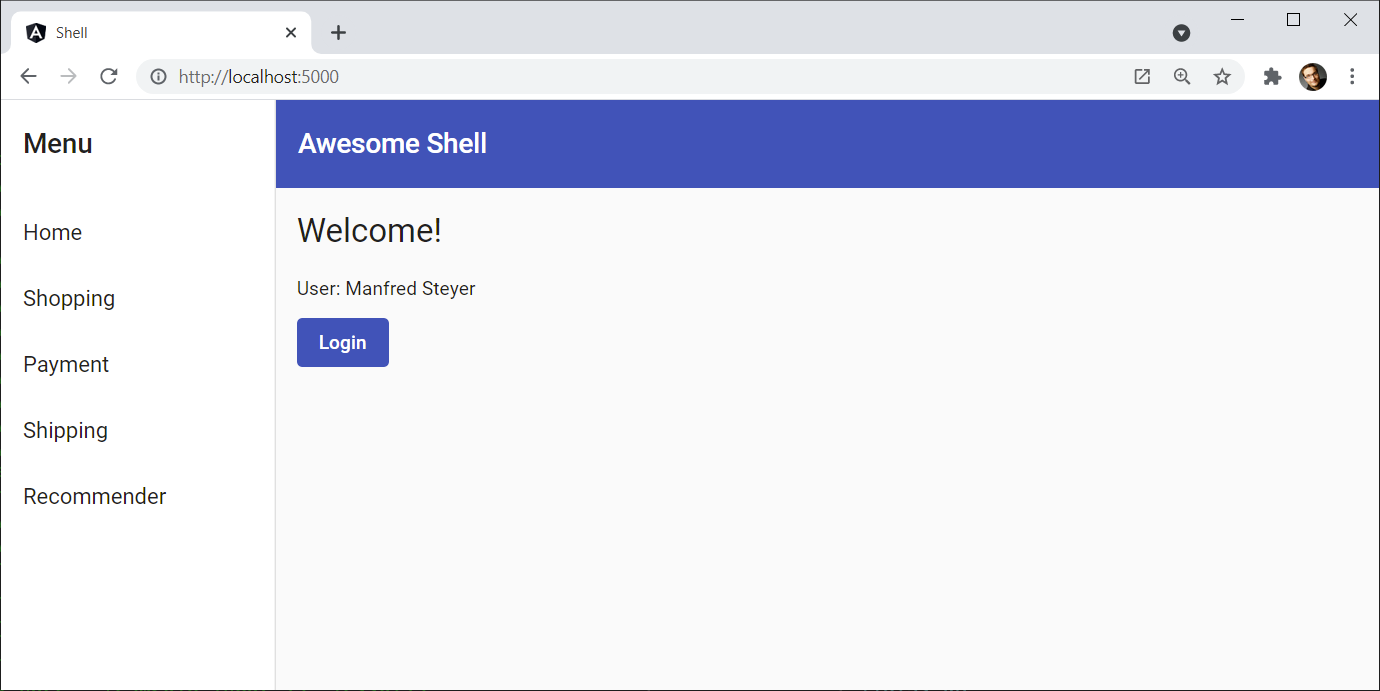 However, when loading the micro frontend on demand, it also knows about the current user: 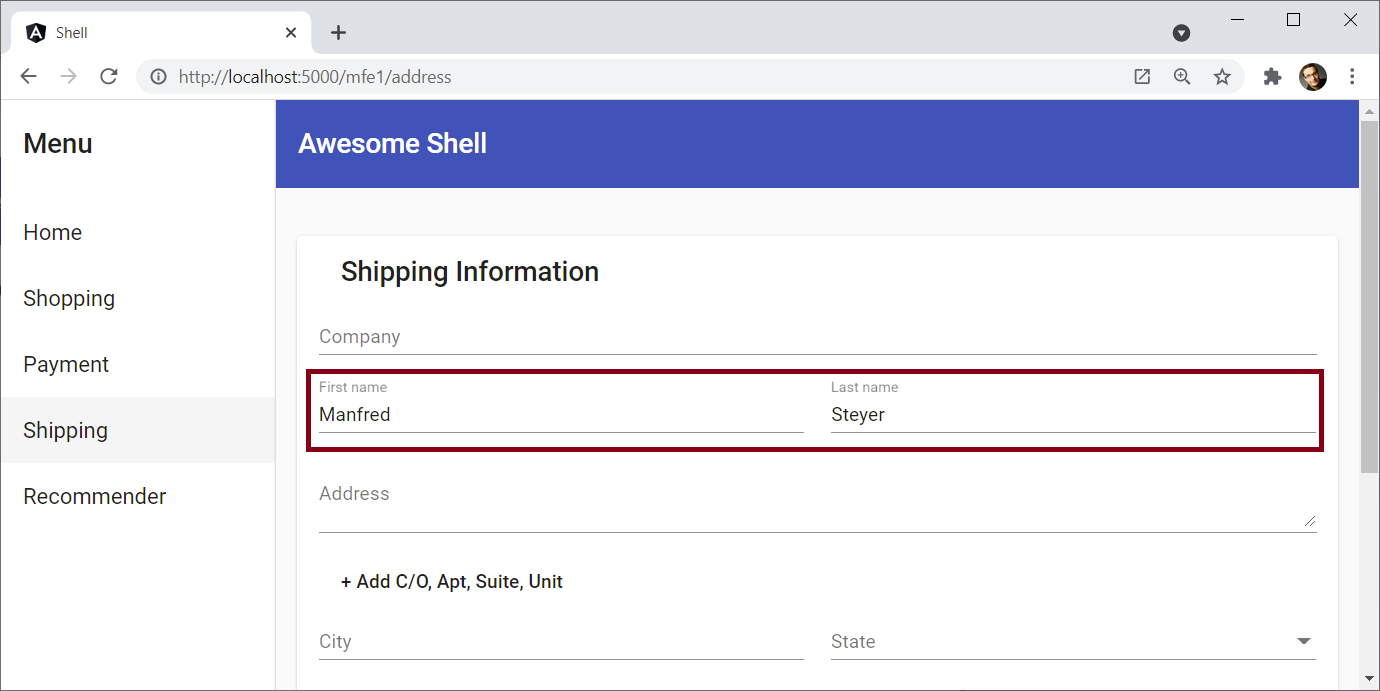 To achieve this, we just need to share a package that holds the information to share. In our case, this is @auth0/auth0-angular as we are using Auth0 as our identity provider. It's available via npm:

To make this work, I've configured a web application at https://manage.auth0.com/. If you want to try this out, don't forget to register your SPA's URL, e. g. http://localhost:4200, under Allowed Callback URLs. Besides this, I went with the default values proposed by the web portal.

To get started, we need to import the AuthModule provided by @auth0/auth0-angular into the shell's but also into mfe1's AppModule:

The values for domain and clientId can be found at https://manage.auth0.com after registering your application.

After that, we can use the AuthService in the shell to login the current user:

I also decided to display the user's name after they logged in:

In the micro frontend's AddressComponent, I'm also using the AuthService to get some information about the current user:

In order to make this work, we need to share the @auth0/auth0-angular package:

This ensures there is only one AuthService at runtime we can use to share information about the current user.

After changing the webpack configuration, we need to restart our applications. If everything works well, we can log in the user via the shell and read the user's name in the lazy loaded micro frontend.

As Module Federation allows runtime integration, it is also the key for plugin systems and micro frontend architectures. However, this approach turns to compile-time dependencies into runtime dependencies; we need a sound set of integration tests to detect issues.

In general, Micro Frontends only makes sense if you want to scale a project by splitting it into several smaller applications developed by different autarkic teams. If you only have one frontend team, Micro Frontend architectures are very likely an overhead. 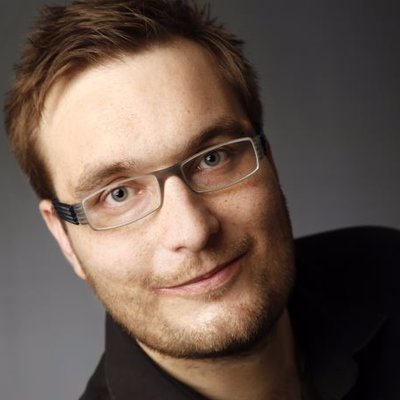 Trainer and Consultant with focus on Angular

Under the leadership of Manfred Steyer, ANGULARarchitects.io supports companies with the implementation of web-based business applications with Angular.

At the Angular seminars he designs, he combined his profound knowledge of Angular, for which he was recognized by Google as a Google Development Expert (GDE), with his experience, which he worked as a team leader in the field of software development, as a Professor at a university of applied sciences and as an external member of the Angular team.

Manfred has published books at O'Reilly, Microsoft Press, and Hanser and writes for Heise Online, windows.developer, and the Java magazine. He also regularly shares his knowledge at conferences.

Trainer and Consultant with focus on Angular

Under the leadership of Manfred Steyer, ANGULARarchitects.io supports companies with the implementation of web-based business applications with Angular.

At the Angular seminars he designs, he combined his profound knowledge of Angular, for which he was recognized by Google as a Google Development Expert (GDE), with his experience, which he worked as a team leader in the field of software development, as a Professor at a university of applied sciences and as an external member of the Angular team.

Manfred has published books at O'Reilly, Microsoft Press, and Hanser and writes for Heise Online, windows.developer, and the Java magazine. He also regularly shares his knowledge at conferences.