TL;DR: There are several tools available for developers to aid the building of various types of websites and applications. One such tool is Create React App(CRA), the CLI tool that helps JavaScript developers create react apps with no build configuration. As awesome as CRA is, developers still need a way of tweaking, adding special scripts and modules that doesn't come bundled with CRA. Today, I'll teach you how to create custom create-react-app scripts for you and your team!

Many developers already use create-react-app to build their React applications, but like I mentioned earlier, developers are still screaming for more configuration options! Some are interested in having support for:

A lot of developers, including JavaScript newbies create React apps from scratch daily, so the CRA team at Facebook built the create-react-app tool to make the process of creating such apps less tedious and error-prone.

As a developer that needs support for some of the technologies I highighted earlier, one way of going about it is running npm run eject. This command copies all the config files and dependencies right into your project, then you can manually configure your app with all sorts of tools to satisfaction.

One major challenge developers might face with eject is not been able to enjoy the future features of CRA . Another challenge with eject would be ineffecient synchronised setup across React developers working in team. One great way of solving this later challenge is publishing a fork of react-scripts for your team, then all your developers can just run create-react-app my-app --scripts-version mycompany-react-scripts and have the same setup across board. Let's learn how to accomplish that! 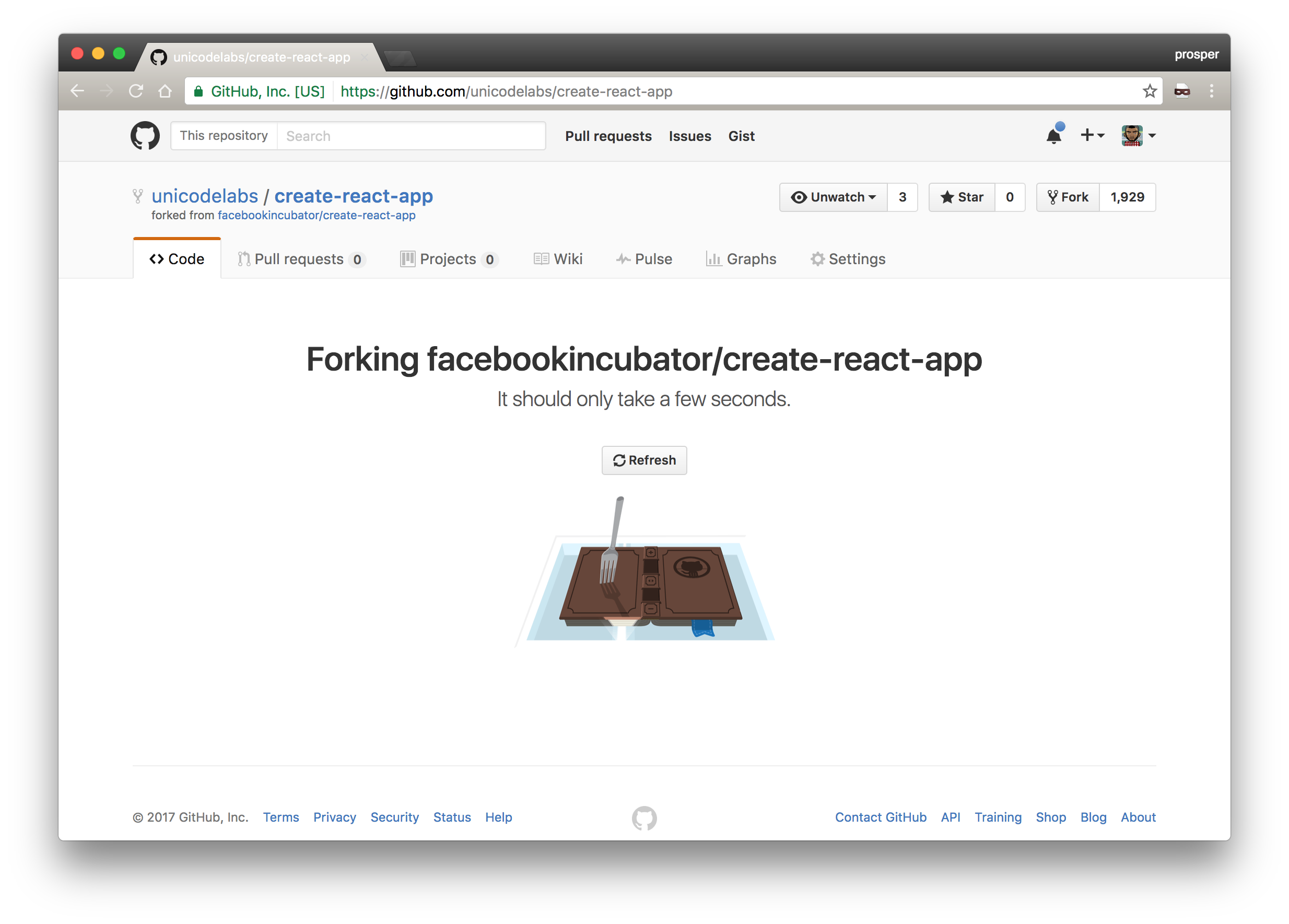 Creating a fork of create-react-app

Note: It is recommended that you fork from the latest stable branch. Master is unstable.

Inside the packages directory, there is a folder called react-scripts. The react-scripts folder contains scripts for building, testing and starting your app. In fact, this is where we can tweak, configure and add new scripts and templates.

Clone the directory and open up the react-scripts/scripts/init.js in your code editor. Let's add some few console messages like so: 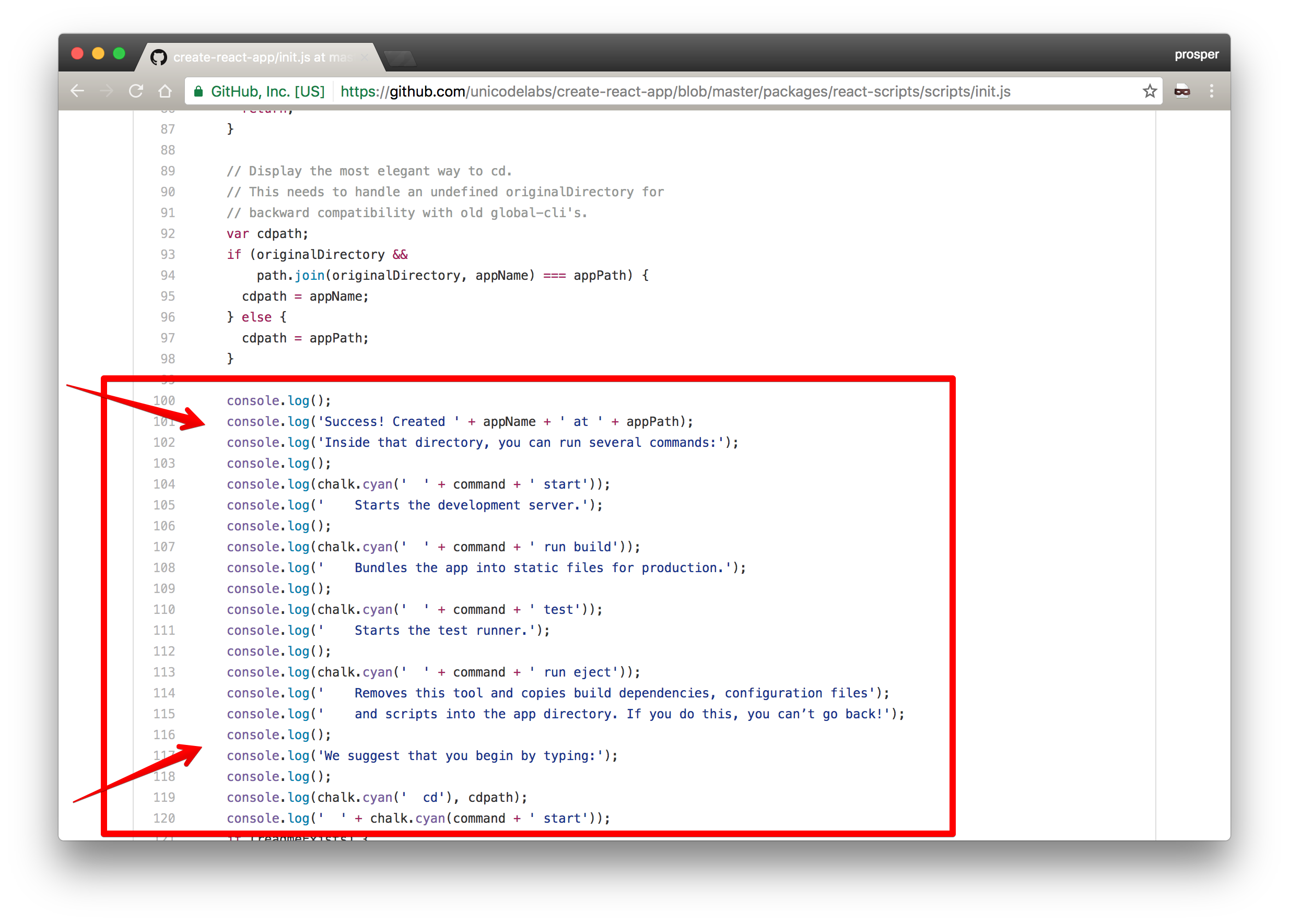 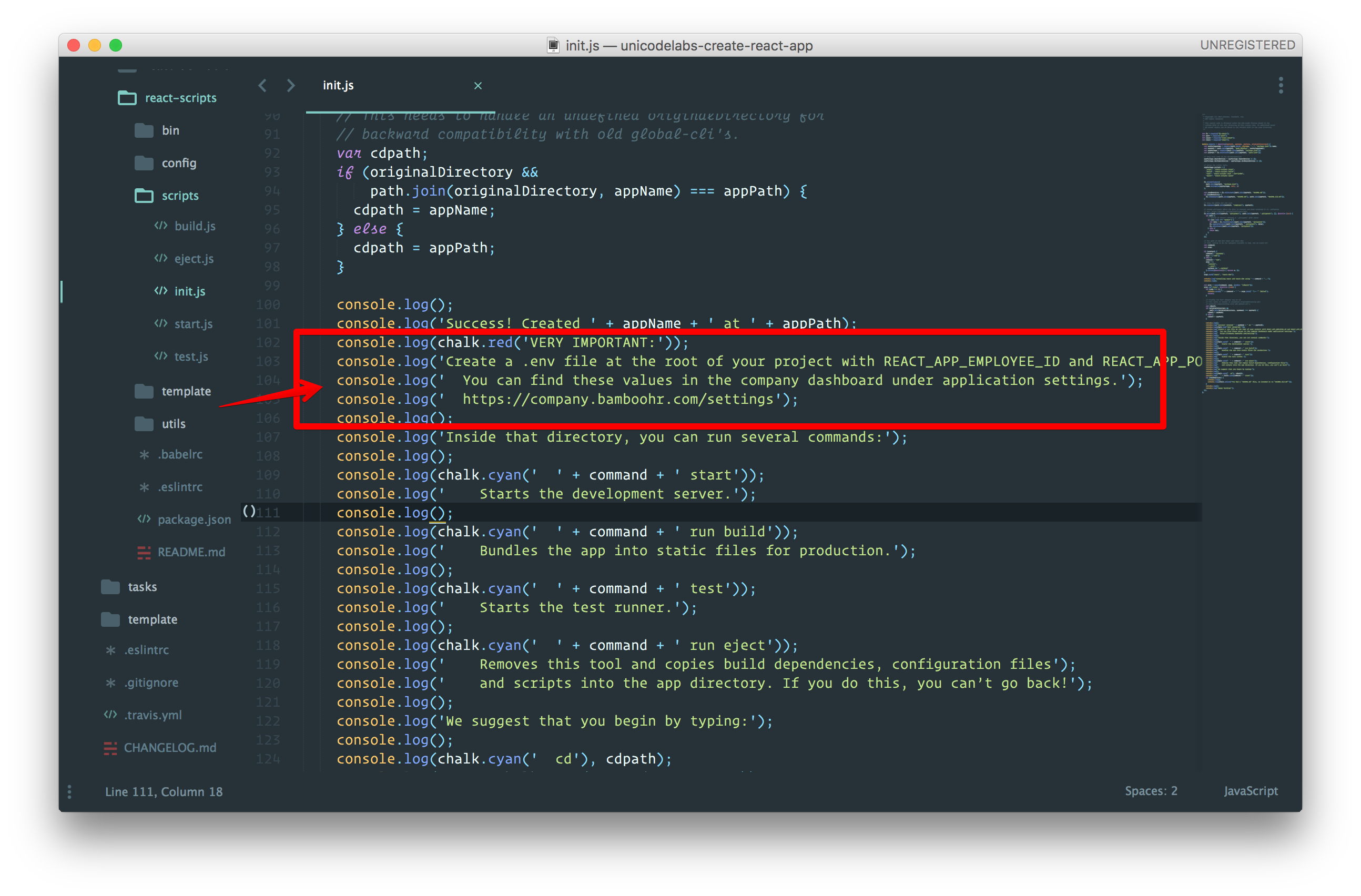 Open up react-scripts/template/src/App.js and replace it with this:

Now, go to react-scripts/template/public directory. Open the index.html file and change the value of the <title> tag to Unicode Labs.

You can also change the favicon to your company's favicon. You can change as many things as you want and add custom components that your team uses frequently.

Create an .env.example in the react-scripts/template directory that contains the following:

A user will have to rename it to .env once the create-react-app tool is done installing the react-scripts. You should add this instruction to the README file.

Note: CRA already includes support for custom env variables if you're open to prefixing their names with REACT_APP.

That's all we need!

Before publishing to npm, we need to change the value of the name key of the package.json file in react-scripts directory to unicodelabs-react-scripts.

Change the value of the description key to Unicodelabs Configuration and scripts for Create React App. Also, point the value of the repository key to the right location. In my case, it is unicodelabs/create-react-app.

Now, cd to the react-scripts directory from your terminal like so:

Change into this directory on your terminal

Go ahead and publish

Head over to your terminal and run:

In your own case it would be yourname-react-scripts, where yourname is your company name or whatever name you choose to give it.

CRA would install it and then you will see a notice like so:

Remember, when we put this message in the code earlier? Awesome!

Now, cd into the test-app directory, rename the .env.example to .env and run npm start command.

Your app will spin up with the new template like so: 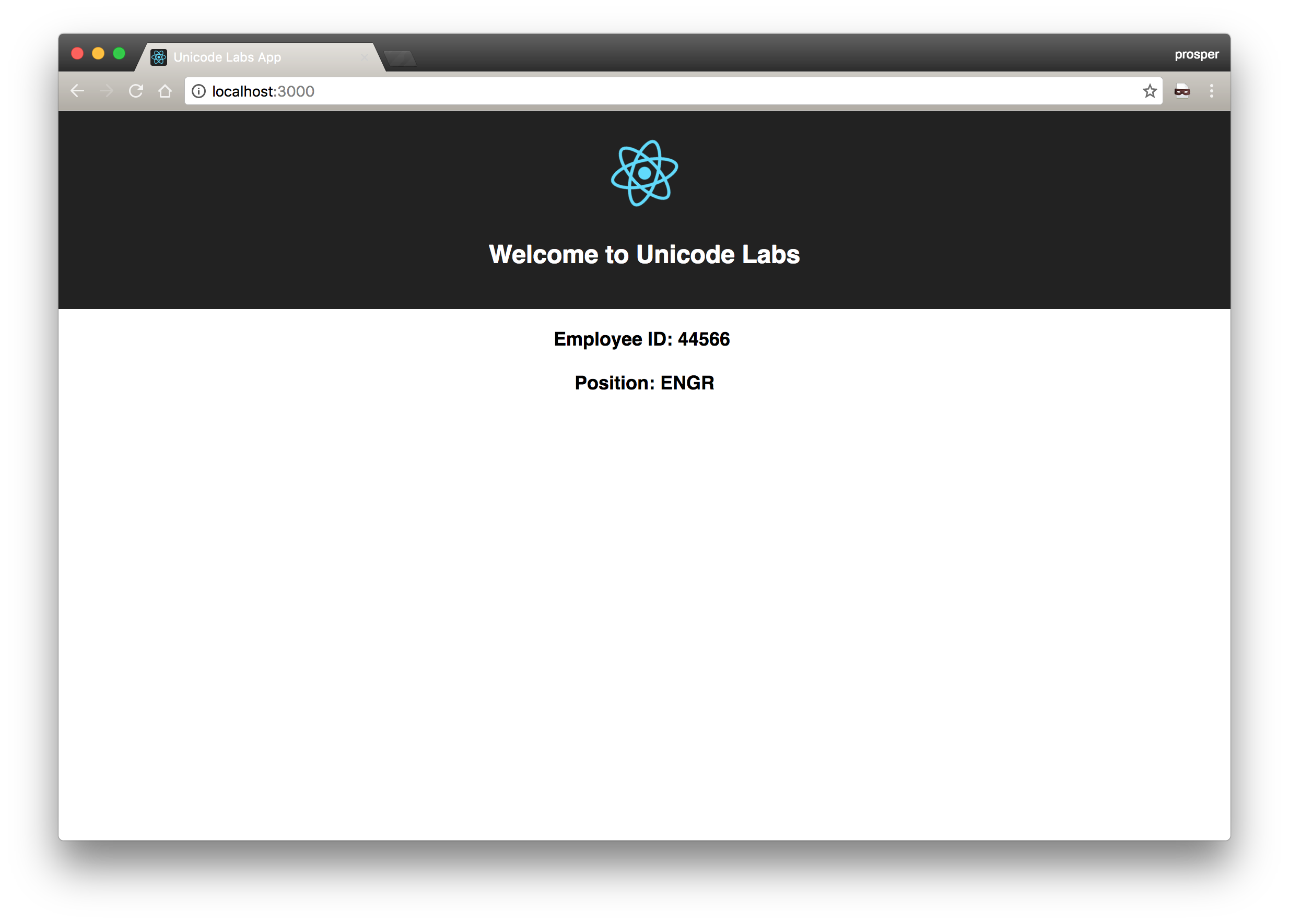 Note: If you have yarn installed, then create-react-app would install your app using Yarn.

Aside: Securing React Apps with Auth0

As you will learn in this section, you can easily secure your React applications with Auth0, a global leader in Identity-as-a-Service (IDaaS) that provides thousands of enterprise customers with modern identity solutions. Alongside with the classic username and password authentication process, Auth0 allows you to add features like Social Login, Multifactor Authentication, Passwordless Login, and much more with just a few clicks.

Also, if you want to follow this section in a clean environment, you can easily create a new React application with just one command:

Then, you can move into your new React app (which was created inside a new directory called react-auth0 by the create-react-app tool), and start working as explained in the following subsections.

Setting Up an Auth0 Application

To represent your React application in your Auth0 account, you will need to create an Auth0 Application. So, head to the Applications section on your Auth0 dashboard and proceed as follows:

After creating your application, Auth0 will redirect you to its Quick Start tab. From there, you will have to click on the Settings tab to whitelist some URLs that Auth0 can call after the authentication process. This is a security measure implemented by Auth0 to avoid the leaking of sensitive data (like ID Tokens).

So, when you arrive at the Settings tab, search for the Allowed Callback URLs field and add http://localhost:3000/callback into it. For this tutorial, this single URL will suffice.

That's it! From the Auth0 perspective, you are good to go and can start securing your React application.

To secure your React application with Auth0, there are only three dependencies that you will need to install:

To install these dependencies, move into your project root and issue the following command:

Note: As you want the best security available, you are going to rely on the Auth0 login page. This method consists of redirecting users to a login page hosted by Auth0 that is easily customizable right from your Auth0 dashboard. If you want to learn why this is the best approach, check the Universal vs. Embedded Login article.

After installing all three libraries, you can create a service to handle the authentication process. You can call this service Auth and create it in the src/Auth/ directory with the following code:

The Auth service that you just created contains functions to deal with different steps of the sign in/sign up process. The following list briefly summarizes these functions and what they do:

Besides these functions, the class contains a field called auth0 that is initialized with values extracted from your Auth0 application. It is important to keep in mind that you have to replace the <AUTH0_DOMAIN> and <AUTH0_CLIENT_ID> placeholders that you are passing to the auth0 field.

Note: For the <AUTH0_DOMAIN> placeholders, you will have to replace them with something similar to your-subdomain.auth0.com, where your-subdomain is the subdomain you chose while creating your Auth0 account (or your Auth0 tenant). For the <AUTH0_CLIENT_ID>, you will have to replace it with the random string copied from the Client ID field of the Auth0 Application you created previously.

Since you are using the Auth0 login page, your users are taken away from the application. However, after they authenticate, users automatically return to the callback URL that you set up previously (i.e., http://localhost:3000/callback). This means that you need to create a component responsible for this route.

So, create a new file called Callback.js inside src/Callback (i.e., you will need to create the Callback directory) and insert the following code into it:

This component, as you can see, is responsible for triggering the handleAuthentication process and, when the process ends, for pushing users to your home page. While this component processes the authentication result, it simply shows a message saying that it is loading the user profile.

After creating the Auth service and the Callback component, you can refactor your App component to integrate everything together:

In this case, you are actually defining two components inside the same file (just for the sake of simplicity). You are defining a HomePage component that shows a message with the name of the logged-in user (that is, when the user is logged in, of course), and a message telling unauthenticated users to log in.

Note that you are using the Auth service in all your components (App, HomePage, and Callback) and also inside the Auth service. As such, you need to have a global instance for this service, and you have to include it in your App component.

So, to create this global Auth instance and to wrap things up, you will need to update your index.js file as shown here:

If you are interested in learning more, please, refer to the official React Quick Start guide to see, step by step, how to properly secure a React application. Besides the steps shown in this section, the guide also shows:

Great programmers constantly sharpen their tools daily to increase productivity. CRA is a great tool for quickly building React Applications. In addition, having your own customized fork of react-scripts helps you and your team easily add all the configurations you need. You'll need to maintain your fork, and make sure it is synced with the upstream to have all updates. Backstroke is a bot that can help you with this.

Have a very productive time hacking away!