TL;DR: Node.js is a JavaScript runtime built on Chrome's V8 JavaScript engine. It has gained massive adoption by developers and organizations around the world because of it's efficient, event-driven and non-blocking I/O model. Node.js makes it possible for developers to code the most popular language (JavaScript) in the world on the backend. Furthermore, Node.js's package manager,npm, houses the largest distribution of open source libraries in the world. Node.js and npm just had new major releases. In this article, we'll highlight 7 notable additions to Node.js and dabble into the new monster, npm@5.

Node.js 8.0.0 was announced to the world on May 31, 2017. The previous Node.js version was v7.10.0. The v was dropped in order to avoid confusion with the V8 JavaScript engine. This major release brings a lot of new features, deprecations and changes. By October, 2017, Node.js 8 will become a Long Term Support (LTS) release. Next, notable additions!

Currently, this is an experimental feature behind a flag. 30 percent of JavaScript modules rely indirectly on native modules.

Existing native modules are written in C/C++ and directly depend on V8 or Native Abstractions for Node.js (NAN) APIs. This dependency requires native modules to be recompiled and updated for every major Node.js release. This is a burden for native modules maintainers. Furthermore, companies and products depending on these modules find it difficult to upgrade their Node.js versions in production because of potential massive code breakage.

Now, the N-API is here to eliminate breakage of dependencies that happens between release lines with native modules. The full N-API functions can be found in the documentation.

"N-API is here to eliminate breakage of dependencies that happens between release lines with native modules."

Note: These 5 modules, node-sass, canvas , leveldown , nanomsg, and iotivity have successfully been ported to use N-API.

Native modules builders and users can start experimenting with this feature. More details can be found here.

This release includes a new util.promisify() API that allows developers to wrap standard callback-style APIs in a function that returns a Promise. Check out this sample code:

The Node.js Buffer API witnessed a lot of changes. Most notable amongst these changes is:

You want Buffer instances with uninitialized memory? No problem! Use the Buffer.allocUnsafe(num) API.

Note: Developers should be very careful when using the Buffer.allocUnsafe. Only use it when you are aware of the risks and how to avoid it.

This release makes the WHATWG URL parser fully supported. No more hiding behind the experimental flag. It's a URL API implementation that matches the URL implementation in modern web browsers like Firefox, Edge, Chrome, and Safari allowing code using URLs to be shared across environments. The URL implementation will be handled equally on these modern browsers.

The experimental async_hooks module otherwise known as async_wrap has received a major bump in Node.js 8.

Look at this example below:

Output when hitting the server with nc localhost 8080:

The first TCPWRAP is the server which receives the connections. The second TCPWRAP is the new connection from the client. When a new connection is made the TCPWrap instance is immediately constructed. This happens outside of any JavaScript stack (side note: a currentId() of 0 means it's being executed from C++, with no JavaScript stack above it). With only that information it would be impossible to link resources together in terms of what caused them to be created, so triggerId is given the task of propagating what resource is responsible for the new resource's existence.

The full documentation can be found here.

From the code above, there is a custom implementation of the _destroy() method. So calling the destroy() method destroys the stream, and emits the passed error.

Developers have a new way of debugging their Node.js applications via the experimental inspector JavaScript API. This API leverages the debug protocol to inspect various Node.js processes.

The inspector module provides an API for interacting with the V8 inspector.

There are other events such as the Debugger.paused and Debugger.resumed events that you can listen to with this module.

Check out how to inspect your node.js scripts and also use Chrome DevTools to debug your Node.js apps

If you are curious about other changes and additions in Node.js 8.0.0 release, you can check out the full list of changes here.

I bumped my npm version to npm 5 using npm install npm@latest -g and the first thing I discovered was that my module installs were insanely fast! 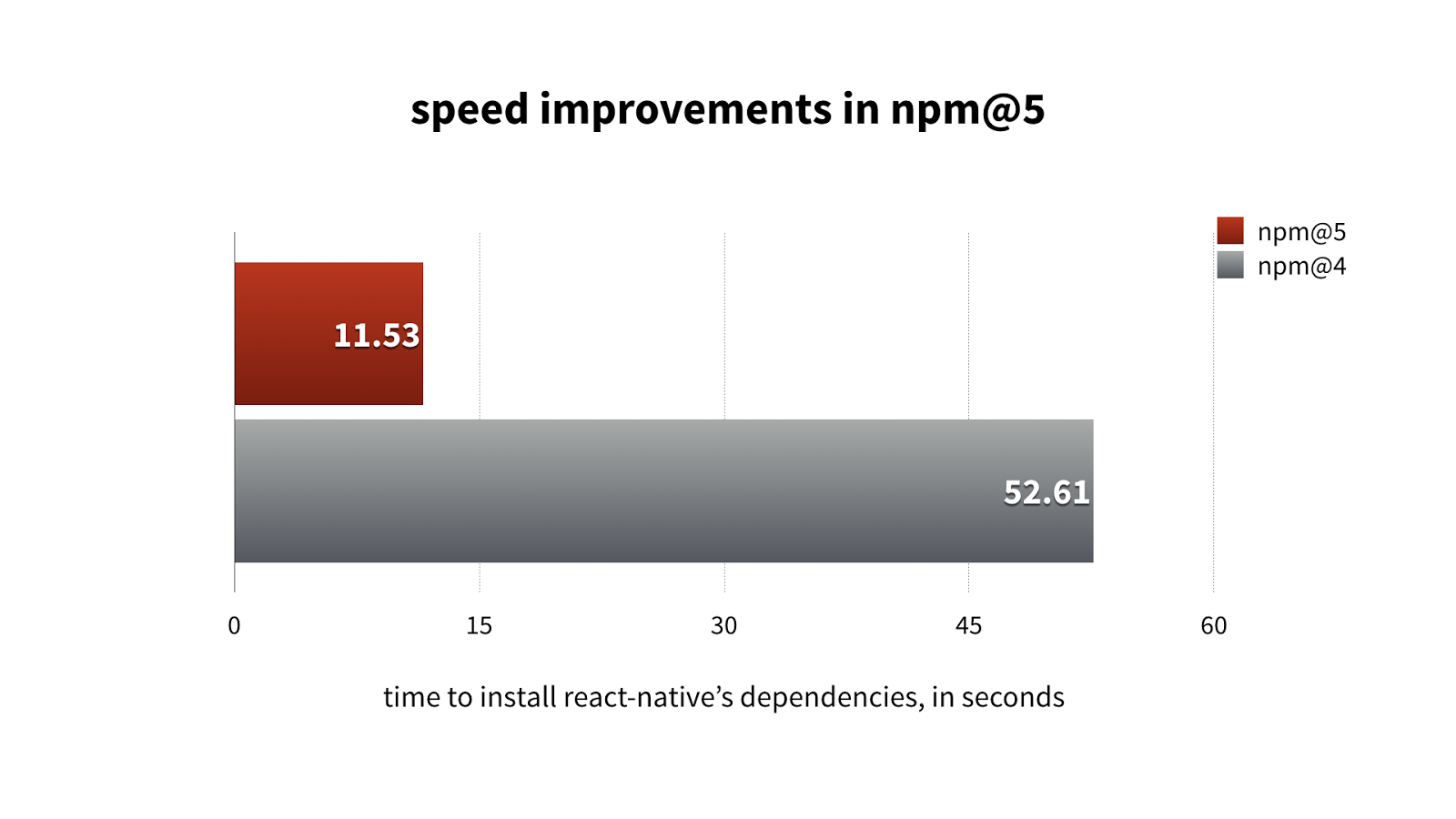 With #npm5 about to come out, I thought I&#39;d update those benchmarks.

One of the benefits of Yarn over npm was faster package install, but with npm@5, you don't need to brew coffee anymore during waiting time! Your modules install before you say Jack! Well, literally not at that speed, but it takes lesser time to install node modules. Significant performance improvements of 20 to 100 percent!

"With npm@5, you don't need to brew coffee anymore during waiting time!"

Check out 5 things you can do with Yarn

With npm@5, lockfiles are the default (package-lock.json). This simply means that whatever files you get when you install a package will be the same every time you install that package after initial install. This eliminates the challenges developers had with having different files on different developer environments after installing the same package.

The npm CLI will use sha512 for tarballs from registries that sends a sha512 checksum as the tarball hash. npm@5 publishes with SHA-512 hashes. This is to protect a developer against malicious attacks by checking downloaded packages and ensuring that code downloaded from the registry is safe and unwavering!

All installs save by default with npm@5. Adding the --save flag is no longer necessary. If you don't want to save the installed package, add the --no-save flag.

npm@5 will use your cache if you are offline to install packages that have been installed before but are no longer available maybe due to accidental node_modules folder deletion. Check this out:

npm@5 shipped with a lot of changes that I might not be able to mention in this article. However, do well to check the full list of changes from the GitHub repo.

Aside: Using Auth0 with npm@5

Auth0 issues JSON Web Tokens on every login for your users. This means that you can have a solid identity infrastructure, including single sign-on, user management, support for social identity providers (Facebook, GitHub, Twitter, etc.), enterprise identity providers (Active Directory, LDAP, SAML, etc.) and your own database of users with just a few lines of code.

Auth0 provides the simplest and easiest to use user interface tools to help administrators manage user identities including password resets, creating and provisioning, blocking and deleting users. A generous free tier is offered so you can get started with modern authentication.

We can easily set up authentication in our JavaScript apps by using Auth0's Centralized Login Page. 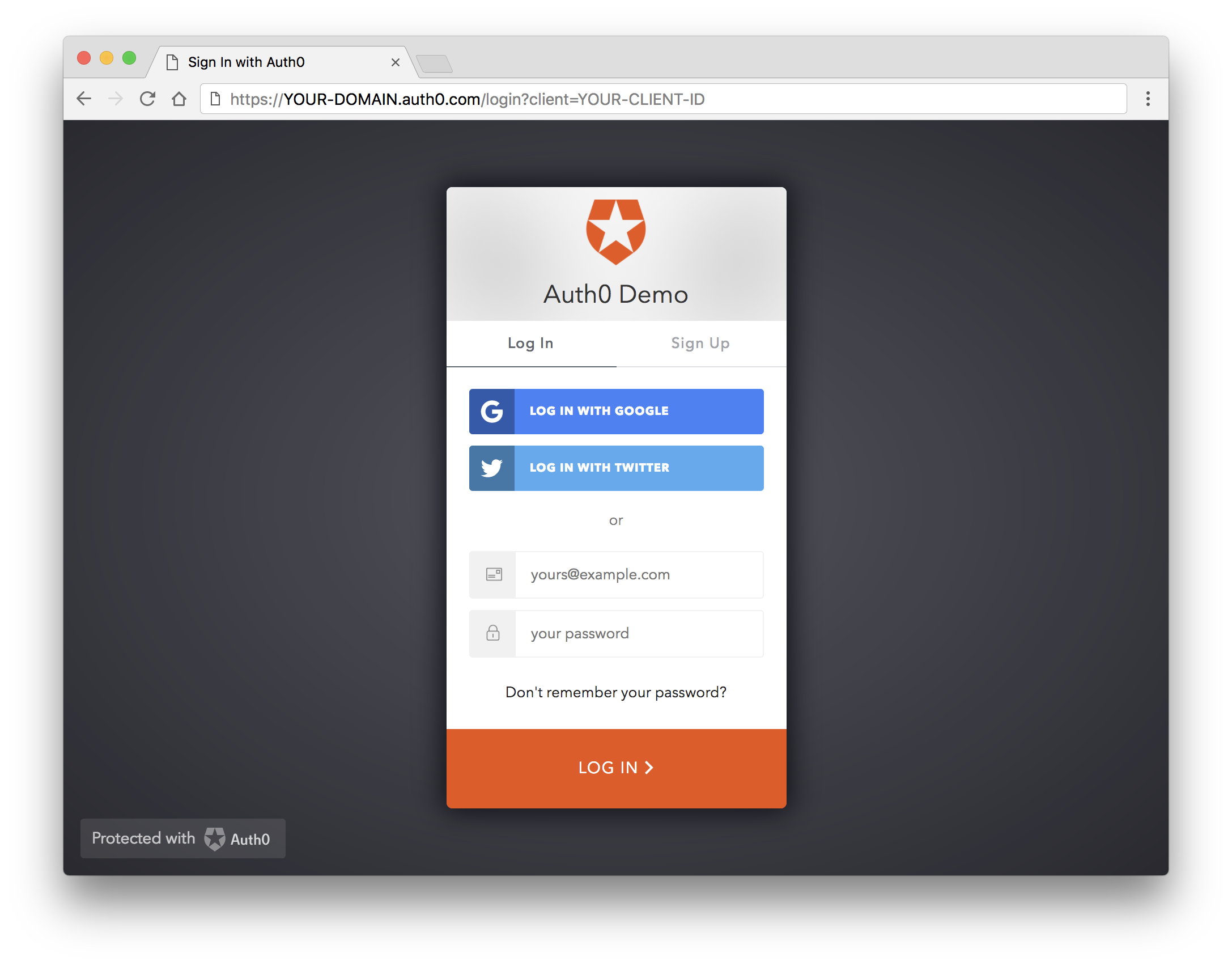 It's as easy as installing the auth0-js and jwt-decode node modules like so:

It installs the auth0-js library within seconds and locks down the exact files with package-lock.json file. If you don't already have an Auth0 account, sign up for one now. Navigate to the Auth0 management dashboard, select Applications from the navigational menu, then select the app you want to connect with the JavaScript framework of your choice. Now head over to the Quickstart docs, select the type of app you want to build and follow the steps highlighted there.

Node.js 8 and npm5 came loaded with lots of new features and significant improvements. I couldn't be more proud of the JavaScript and Open source community right now. Is Yarn going to release something super amazing soon? Maybe a faster install experience? I'll be on the look out!

Have you switched to Node.js 8 and npm@5 yet? What are your thoughts? Let me know in the comments section! 😊