JSON Web Tokens are an open, industry standard RFC 7519 method for representing claims securely between two parties. They can be digitally signed or encrypted and there are several algorithms that can be employed in signing a JWT. In this article, we'll look at the two most common algorithms and discover how using weak keys can allow malicious parties to brute force the secret key from the JWT.

What is a JSON Web Token?

A JSON Web Token encodes a series of claims in a JSON object. Some of these claims have specific meaning, while others are left to be interpreted by the users. These claims can be verified and trusted because it is digitally signed. Examples of these claims are issuer (iss), subject (sub), audience (aud), expiration time (exp), not before (nbf), and issued at (iat). JWTs can be signed using a secret (with HMAC algorithm) or a public/private key pair using RSA or Elliptic-Curve.

Structure of a JSON Web Token

A signed, compact-serialized JWT consists of three main parts separated by a . namely:

The header typically consists of two parts: the type of the token, which is JWT, and the hashing algorithm such as HS256 or RS256. Example:

Then, this JSON is Base64Url encoded to form the first part of the JWT.

This part of the token carries the claims. An example of a payload can be found below:

The payload is then Base64Url encoded to form the second part of the JWT.

The last part of the token is the signature. The signature is composed from the signing of the encoded header, encoded payload, and a secret.

An example of a signature using the HMAC SHA256 (HS256) algorithm can be created like so:

The most common algorithms for signing JWTs are:

Hash-based Message Authentication Code (HMAC) is an algorithm that combines a certain payload with a secret using a cryptographic hash function like SHA-256. The result is a code that can be used to verify a message only if both the generating and verifying parties know the secret. In other words, HMACs allow messages to be verified through shared secrets.

This is an example showcasing a HMAC-based signing algorithm:

An example of signing a JWT with the HS256 algorithm using the jsonwebtoken JavaScript library can be found below:

When signing and verifying JWTs signed with RS256, you deal with a public/private key pair rather than a shared secret. There are many ways to create RSA keys. OpenSSL is one of the most popular libraries for key creation and management:

Both PEM files are simple text files. Their contents can be copied and pasted into your JavaScript source files and passed to the jsonwebtoken library.

ECDSA algorithms also make use of public keys. We can use OpenSSL to generate the key as well:

If you open these files you will note that there is much less data in them. This is one of the benefits of ECDSA over RSA. The generated files are in PEM format as well, so simply pasting them in your source will suffice.

Note: These algorithm notes above are excerpts from the very comprehensive Auth0 JWT book written by Sebastian Peyrott. Download it for more information on signing and validating JWTs using these algorithms mentioned above.

As secure as HS256 is, especially when implemented the right way, brute-forcing a JSON web token signed with small and medium sized shared-secrets using HS256 is still very possible.

Recently, I came across a tool written in C on GitHub. It is a multi-threaded JWT brute force cracker. With a huge computing power, this tool can find the secret key of a HS256 JSON Web token.

Please note the RFC7518 standard states that "A key of the same size as the hash output (for instance, 256 bits for "HS256") or larger MUST be used with this algorithm." Auth0 secret keys exceed this requirement making cracking via this or similar tools all but impossible.

I used a Mac computer to try out the brute force attack. First, make sure you have openssl installed. If it is not, install it with homebrew like so:

Then run this command in the terminal like so:

The specs of my MacBook are mentioned below:

Go ahead and clone the jwt-cracker from GitHub.

An example JWT signed with HS256 and a secret, Sn1f is:

Now, run the jwt-cracker from your terminal to crack the token like so:

Note: Make sure the jwtcrack script is executable by running chmod a+x ./jwtcrack

It took about 6.16s on my laptop to crack the secret key.

With the help of jwt.io, let's sign another token quickly, but with a secret, secret.

Run the cracker again with the new JWT like so:

From the results shown above, it cracked the token and got our secret, which is actually secret in about 3273.51s.

Let's take another look at the keys we used to generate the tokens that were cracked easily. What are the key sizes? The first key, Sn1f is 32-bit.

The second key, secret is 48-bit. This is simply too short to be a valid key. In fact, the JSON Web Algorithms RFC 7518 states that a key of the same size as the hash output (for instance, 256 bits for "HS256") or larger MUST be used with the HS256 algorithm.

I therefore recommend that anyone trying to generate a JSON Web token and signing them with HS256 to use a properly sized secret key. Auth0 secret keys are 512 bits in length and not susceptible to this type of brute force attack. Additionally, Auth0 allows you to easily sign your JWTs with RS256.

With Auth0, you can easily generate JWTs for authentication and authorization. By default, we use HS256 to sign the JWTs generated, but we also allow customers to use RS256 if their use case calls for it. The Auth0 Lock library returns a signed JWT that you can store on the client side and use for future requests to your APIs.

In the vast majority of use cases you would never need to change the signing algorithm, but on the off chance that you do, let's see how to accomplish it with Auth0. 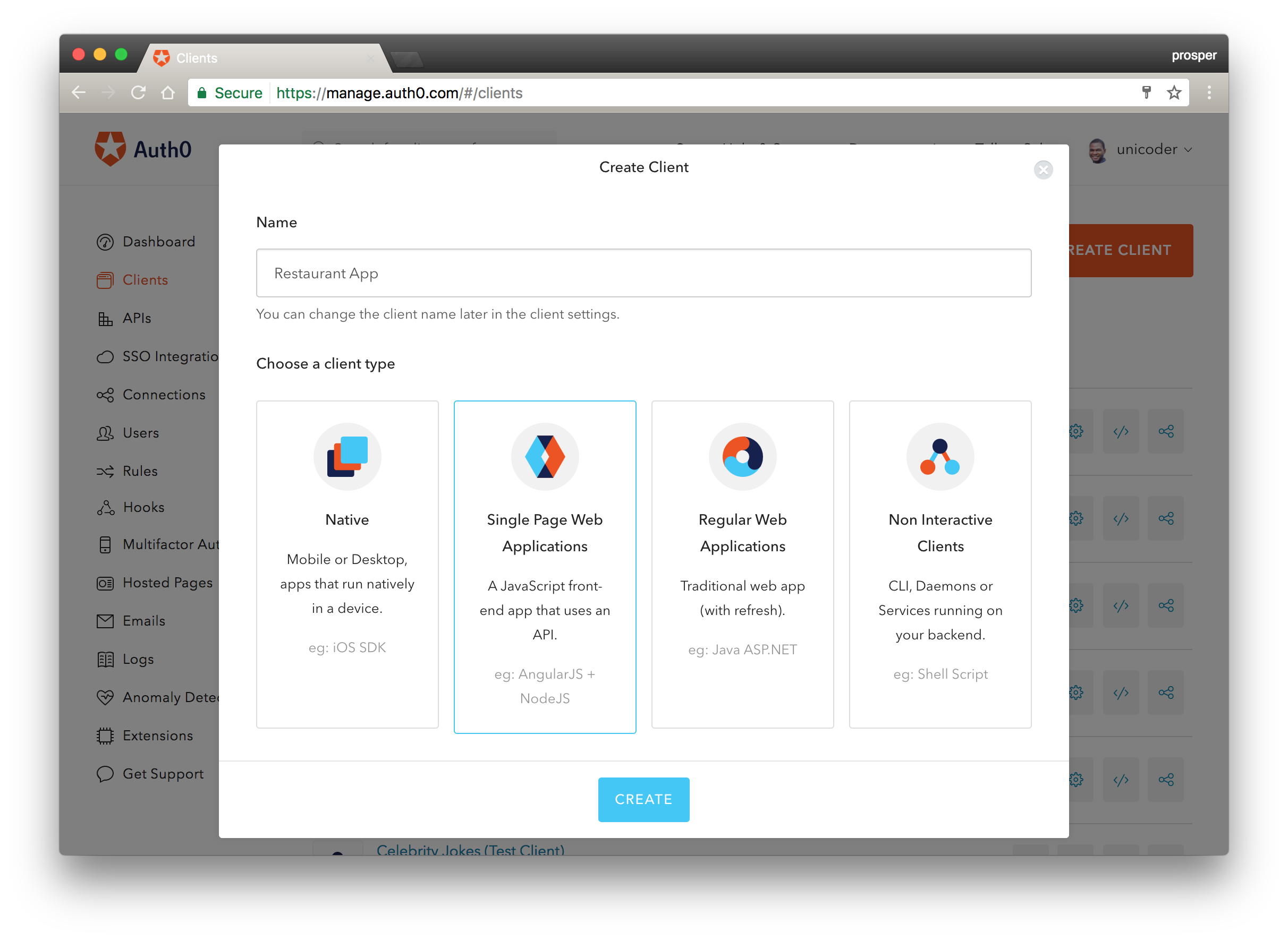 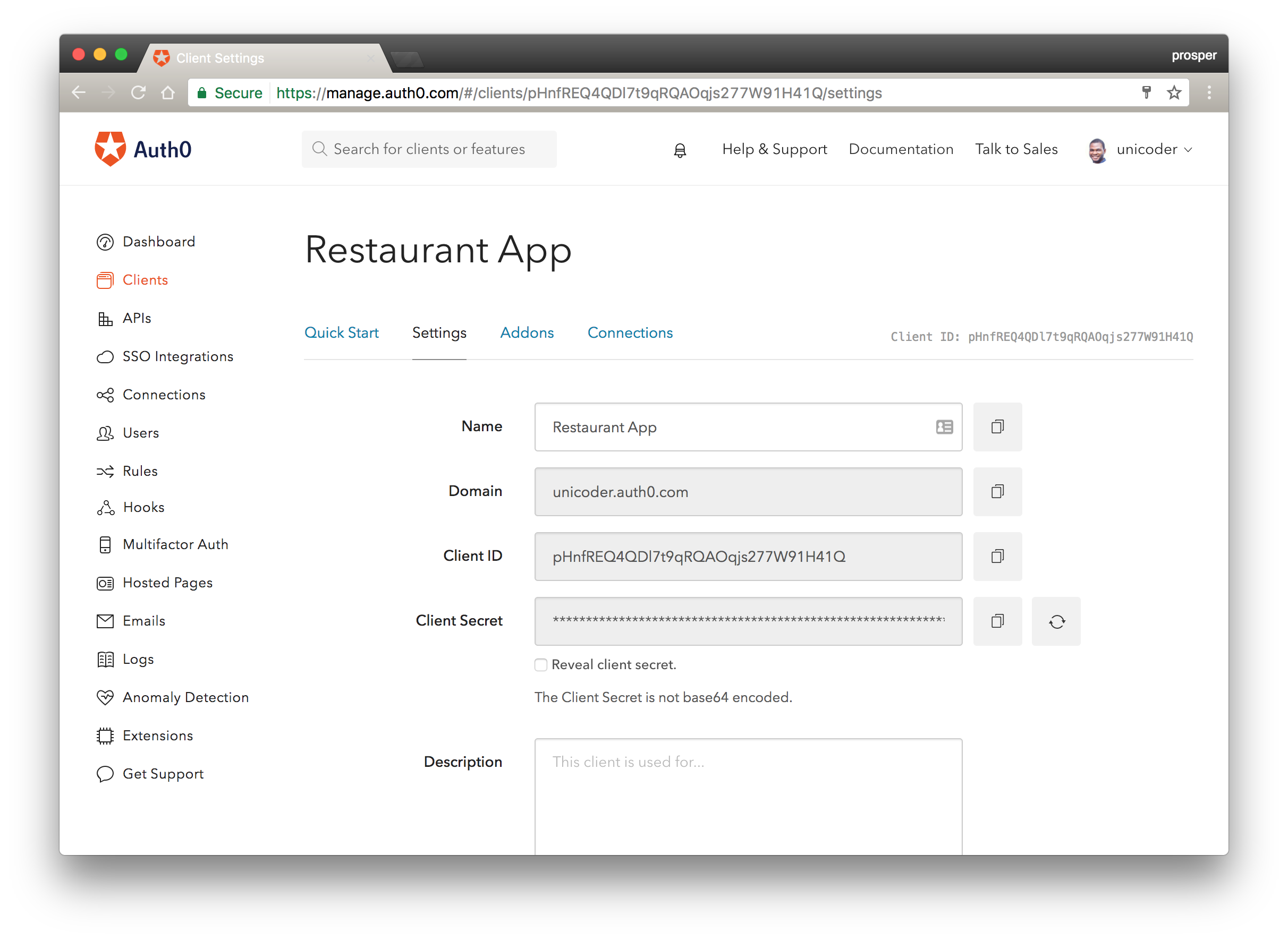 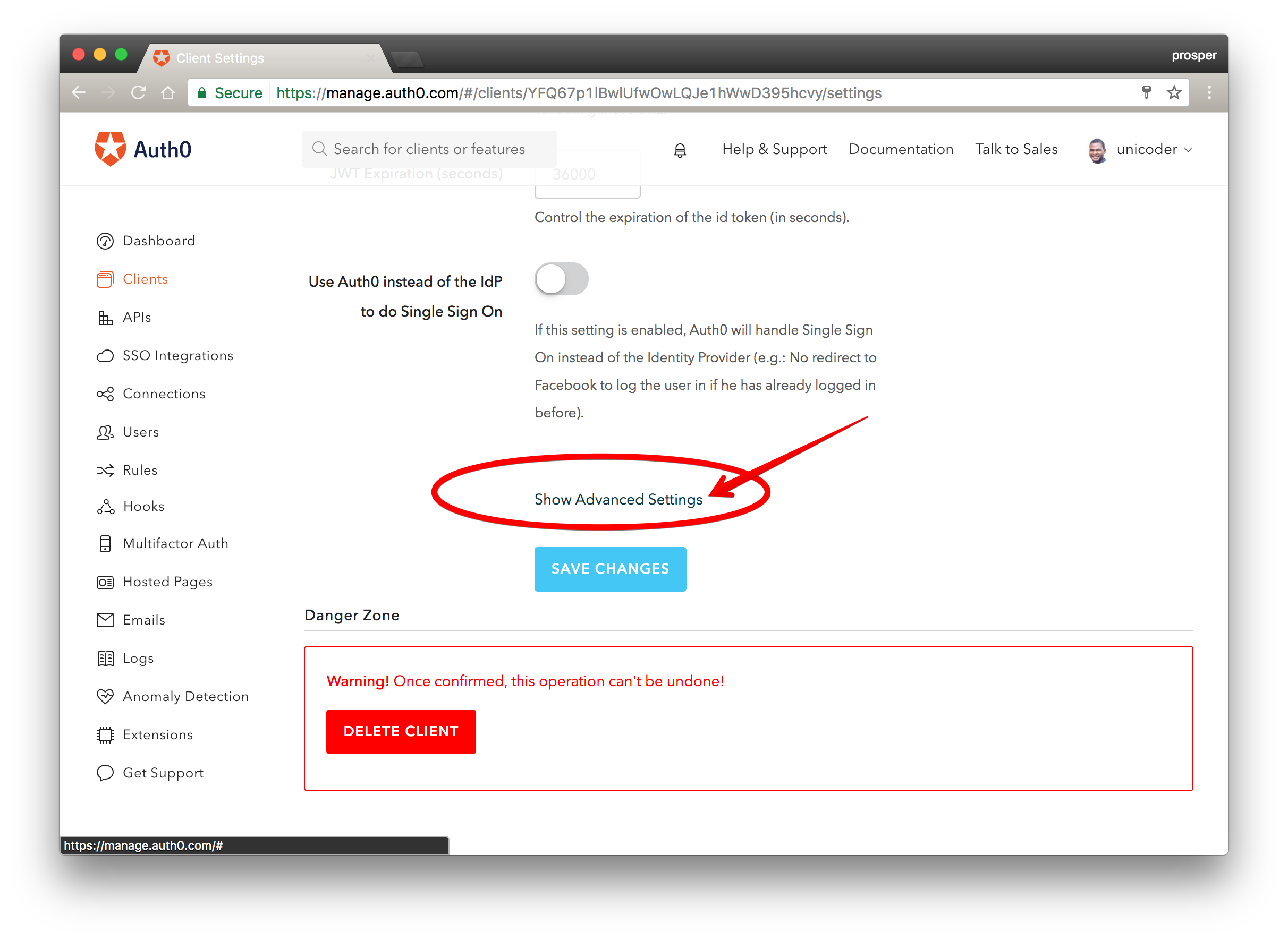 Switching to RS256 is as easy as selecting the option from the dropdown on the Auth0 dashboard like so: 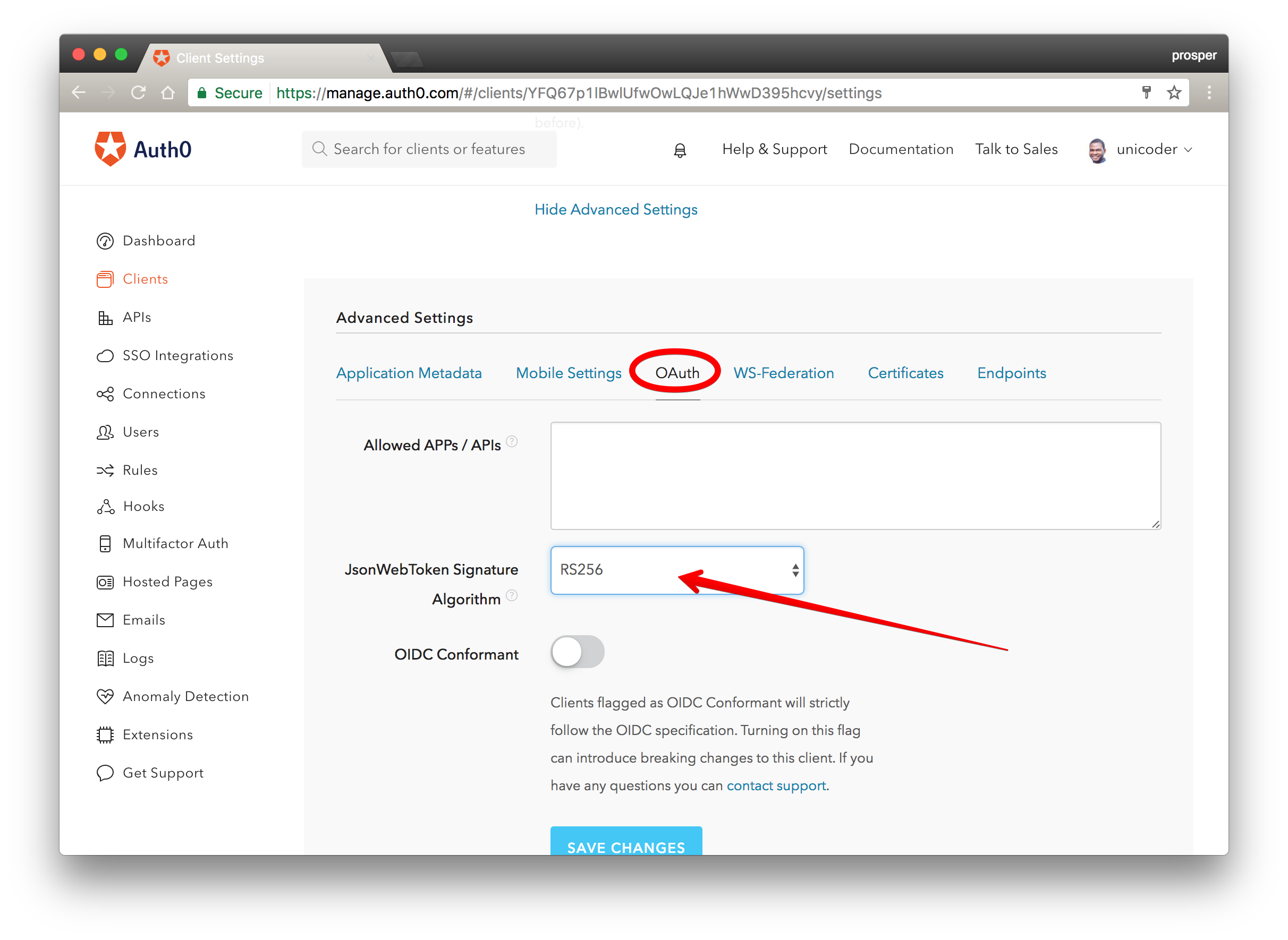 JSON Web Tokens (JWTs) are lightweight and can easily be used across platforms and languages. They are a clever way to pass signed or encrypted information between applications. There are several JWT libraries available for signing and verifying the tokens.

We have also been able to show that brute forcing of HS256 JWTs is certainly possible, when used with short and weak secret keys. Unfortunately, this is a limitation of most shared-key approaches. All cryptographic constructions, including HS256, are insecure if used with short keys, so ensure that implementations satisfy the standardized requirements.

As a rule of thumb, make sure to pick a shared-key as long as the length of the hash. For HS256 that would be a 256-bit key (or 32 bytes) minimum. Luckily, if you are an Auth0 customer you have nothing to worry about as we follow all the standards and best practices when generating secret keys.