TL;DR: Bootstrap is the de-facto design frontend component library for designing web and mobile sites. In this article, I'll cover the new features in Bootstrap 4.0 and several other changes and deprecations.

We never stopped believing, and hope you didn’t either! Bootstrap 4.0.0 has finally landed! https://t.co/zFAOxpyhvD

Bootstrap is built and maintained by @mdo, @fat and a core team of developers. It is an open source toolkit that provides a responsive grid system, Sass variables and mixins, prebuilt components for developing with HTML, CSS, and JS.

Bootstrap 4.0 final release was announced to the world on January 19, 2018, after the alpha version was released three years ago. Bootstrap 4 is a major rewrite of the entire project. It is such a huge milestone for the Bootstrap team to tag the 4.0.0 release after many years of hard work squashing bugs, improving the framework and polishing the documentation. Let's go through the major changes in Bootstrap from the v4.0.0-beta to version 4.0.0.

Nearly three years of personal open source work and energy has gone into this thing. Words cannot express how happy I am that it’s out. Now, on to v4.1! https://t.co/XgpZzzDNoY

Before version 4-beta, Normalize.css was a dependency in Bootstrap used for rendering the consistent appearance of all the HTML elements across the board. The team decided to drop the dependency, fork some of it and remixed it with Bootstrap's Reboot for a better and stable normalization approach.

Unfortunately, it dropped support for IE8, IE9 and iOS 6. If you are building applications that need support for these browser versions, use Bootstrap v3.

With Bootstrap v4, Flexbox is enabled out of the box. Flexbox ships with a lot of awesome features, thus making Bootstrap v4 very rich with benefits such as a Flexbox based grid, responsive sizing and floats, auto margins, vertical centering, auto-layout grid and even new spacing utilities. Flexbox also powers the new card components.

" With Bootstrap v4, Flexbox is enabled out of the box."

With Bootstrap version 4, an improvement has been made to make it a 5 grid tier system, xs, sm, md, lg, and xl. The new grid tier, xl, extends the media query range all the way down to 544px.

Check out this awesome Bootstrap 4 Grid Demo on Codepen.

The @screen format no longer exists in Bootstrap v4.0. Now, you can just use media queries easily like the example below:

In Bootstrap 4, the default checkboxes and radios have been rewritten to have the same layout styles.

Form classes we were very familiar with in version 3 have been modified like so:

Check out more information on forms.

Functionality for panels, thumbnails and wells are available as modifier classes for cards.

All these classes are available as styling for header elements such as .card-warning to a <h2>,<h3> element.

Cards have no specific width so they'll be 100% wide by default. Custom CSS, grid classes and mixins can adjust it to whatever you want.

Bootstrap includes a plethora of shorthand responsive margin and padding utility classes to modify an element’s appearance. This simply works by assigning responsive-friendly margin or padding values to an element with shorthand classes.

Here's a psuedocode of its representation, {margin or padding}-{sides}-{size}. An example is:

Bootstrap v4 ships with improves support for auto-placement of tooltips, popovers and dropdowns. Bootstrap 4 dropped support for Tether.js in favour of Popper.js which does a great job and is actively maintained.

The Bootstrap team has a comprehensive guide for migrating to Bootstrap v4. However, there is a very nifty tool from the community that allows you to drop in a piece of code and convert it to the Bootstrap v4 equivalent.

Auth0, a global leader in Identity-as-a-Service (IDaaS), provides thousands of customers in every market sector with the only identity solution they need for their web, mobile, IoT, and internal applications. Its extensible platform seamlessly authenticates and secures more than 50M logins per day, making it loved by developers and trusted by global enterprises.

You can customize the look and feel of the Auth0 Login Page to suit your web application's appearance or theme from the Auth0 dashboard. Click on the Hosted Pages option from the sidebar, then go ahead to enable the Customize Login Page button.

You'll be presented with various templates. Choose whatever template suits you.

For every template selected, the editor will be populated with HTML, CSS and JS code that you can modify to change the look and feel. 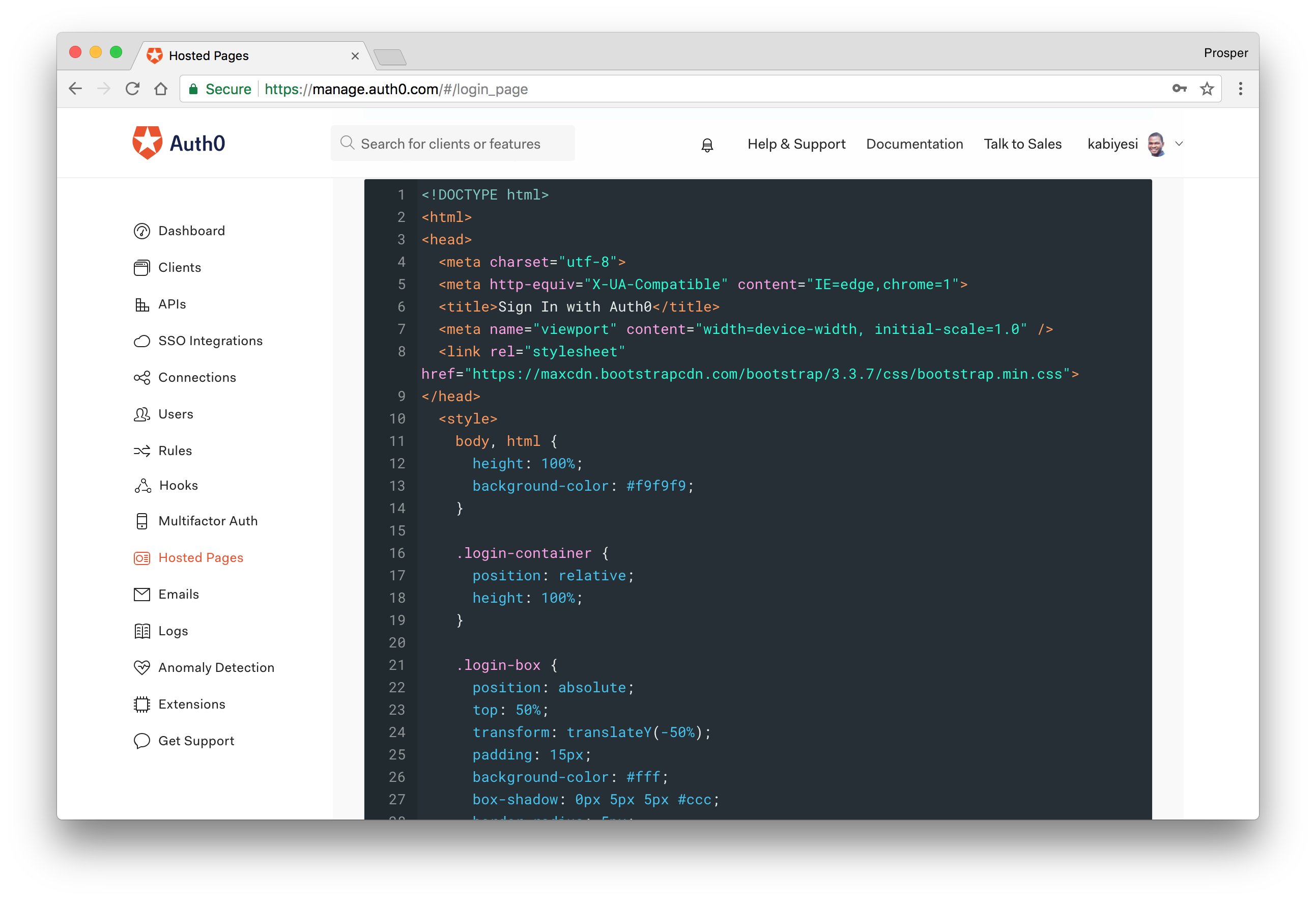 Bootstrap 4 came loaded with new features and significant improvements. It is better, more customizable and slick. I am proud of what the Bootstrap team and the community achieved with this release.

"Bootstrap 4 is a major rewrite of the entire project."

Have you switched to Bootstrap v4.0 yet? What are your thoughts? Let me know in the comments section! 😊