TL;DR: ReactJS is a UI library that has gained massive adoption by developers and organizations around the world because of its efficient and reactive model. In this article, we'll highlight notable additions to ReactJS 16 and dabble into the architecture it runs on.

ReactJS is a JavaScript library, built and maintained by Facebook. At the time of writing, ReactJS has over 78,000 stars on GitHub. And many web platforms such as Twitter, Airbnb, Lyft, Dropbox, Pinterest, Whatsapp and Instagram use ReactJS to build their user interfaces. The ReactJS developer community is very robust. In fact, the community is so robust that when Facebook decided to implement the BSD+ Patents license, there was a public outcry from the community. The complaints from developers were on every other blog and forum as well as at meetups and conferences. Developers and software shops around the world are pretty excited and relieved that ReactJS has been re-licensed under the MIT license.

ReactJS 16 was announced to the world on September 26, 2017. Facebook has been working on releasing this new version for a while now. It's great that there is a new release, but ReactJS 16 is a very special release. What's exciting about this new ReactJS release is the fact that it was entirely rewritten from scratch while ensuring that the public API remains unchanged. This major release brings a lot of new features, deprecations, and changes.

Questions have been flying around as to why Facebook decided to rewrite the internals of ReactJS while keeping the public API essentially unchanged. Facebook has been working on React Fiber, which is a reimplementation of ReactJS's core algorithm for about two years now. The goal of React Fiber is to enable incremental rendering—the ability to split rendering work into chunks and spread it out over multiple frames. In addition, the ability to pause, abort, or reuse work as new updates come in and the ability to assign priority to different types of updates. There are many reasons as to why it was rewritten but I'll highlight a few reasons.

"The goal of React Fiber is to enable incremental rendering."

Let's talk a bit about React Fiber. As I mentioned earlier, React Fiber has been in development for a while. And there was a website made specially just to track the progress of React Fiber; isfiberreadyyet.com.

React Fiber is a complete, backward compatible rewrite of the ReactJS core which enables sophisticated scheduling of rendering work. It is a reimplementation of ReactJS's core algorithm. The goal of React Fiber is to increase its suitability for app development in sections like gestures, animation, and layouts. One key feature is the support for incremental rendering. Incremental rendering is the ability to split the rendering process into chunks and spread it out over multiple frames.

React Fiber is a reimplementation of a stack frame specialized for ReactJS components. Each fiber can be thought of as a virtual stack frame where information from the frame is preserved in memory on the heap, and because the info is saved on the heap, you can control and play with the data structures and process the relevant information as needed.

React Fiber allows smooth rendering of the UI by pausing once in a while and checking for more important updates rather than waiting for all the changes to be propagated throughout the entirety of the component tree before updating the UI. The task scheduling ability of React Fiber makes this possible.

The Reconciler is used by the renderer to perform updates to the DOM. Whenever a component updates, be it mounting, unmounting or any form of update, the reconciler (known as the stack reconciler) processes the component tree from top to bottom synchronously in a single pass, checks for changes in the tree, then passes on these changes to the renderer. In previous versions of ReactJS, the reconciler did not have the ability to pause work, thus making performance suboptimal when deep updates occur and the CPU time is limited.

" In ReactJS, we have two important players: the Reconciler and the Renderer."

With React Fiber, the new reconciler has the ability to do the following:

The Fiber Triangle demo now lets you toggle time-slicing on and off. Makes it much easier to see the effect. Thanks @giamir for the PR! 🎉 pic.twitter.com/qhsWUIyXPf

Note: Work is the result of an update. Updates are computations performed during the traversal of the component trees.

Check out more information on Reconciliation and the React Fiber Architecture.

Apart from the fact that ReactJS 16 runs on the new engine, React Fiber, ReactJS 16 ships with some new features.

"In ReactJS 16, there are two different methods for rendering on the client side, render() and hydrate()."

Note: render() can still be used to render on top of server-side rendered markup, but it's recommended to use hydrate() now for that type of rendering in ReactJS 16. 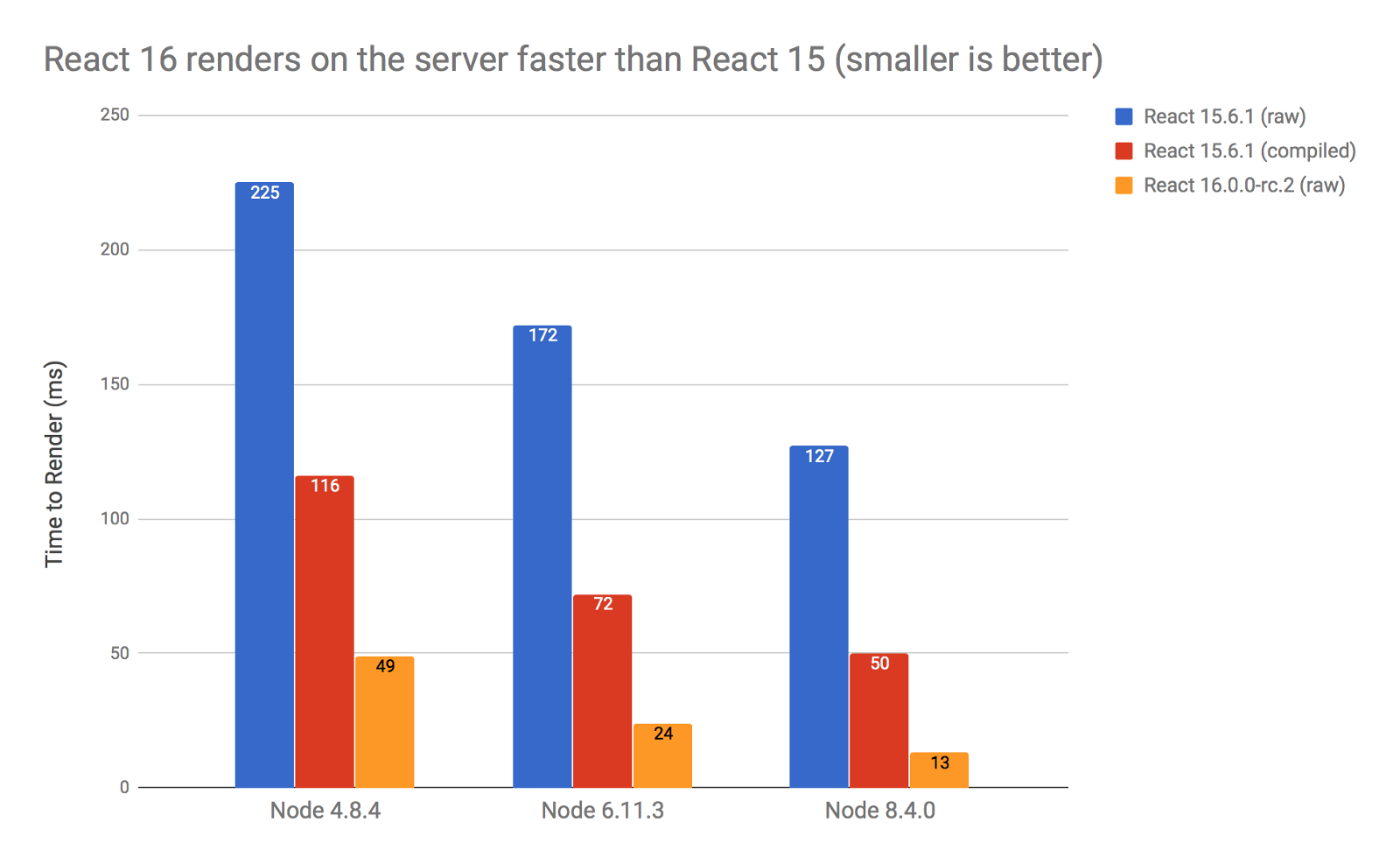 ReactJS 16 does not support error boundaries and portals in server-side rendering.

For more information, check out this excellent article on server-side rendering in ReactJS 16.

There a few deprecations and a number of breaking changes in ReactJS 16.

For more information, check out the full list of deprecations and breaking changes on GitHub.

There has been a lot of performance observation and testing done by apps that have made the upgrade to ReactJS 16. And so far, there have been a lot of cheer and positive feedback for ReactJS 16. In fact, Twitter Lite already uses ReactJS 16.

The Twitter Lite engineering team discovered that the app's bundle size reduced a little and there were very clear improvements on large trees.

Aside: Securing React Apps with Auth0

As you will learn in this section, you can easily secure your React applications with Auth0, a global leader in Identity-as-a-Service (IDaaS) that provides thousands of enterprise customers with modern identity solutions. Alongside with the classic username and password authentication process, Auth0 allows you to add features like Social Login, Multifactor Authentication, Passwordless Login, and much more with just a few clicks.

Also, if you want to follow this section in a clean environment, you can easily create a new React application with just one command:

Then, you can move into your new React app (which was created inside a new directory called react-auth0 by the create-react-app tool), and start working as explained in the following subsections.

Setting Up an Auth0 Application

To represent your React application in your Auth0 account, you will need to create an Auth0 Application. So, head to the Applications section on your Auth0 dashboard and proceed as follows:

After creating your application, Auth0 will redirect you to its Quick Start tab. From there, you will have to click on the Settings tab to whitelist some URLs that Auth0 can call after the authentication process. This is a security measure implemented by Auth0 to avoid the leaking of sensitive data (like ID Tokens).

So, when you arrive at the Settings tab, search for the Allowed Callback URLs field and add http://localhost:3000/callback into it. For this tutorial, this single URL will suffice.

That's it! From the Auth0 perspective, you are good to go and can start securing your React application.

To secure your React application with Auth0, there are only three dependencies that you will need to install:

To install these dependencies, move into your project root and issue the following command:

Note: As you want the best security available, you are going to rely on the Auth0 login page. This method consists of redirecting users to a login page hosted by Auth0 that is easily customizable right from your Auth0 dashboard. If you want to learn why this is the best approach, check the Universal vs. Embedded Login article.

After installing all three libraries, you can create a service to handle the authentication process. You can call this service Auth and create it in the src/Auth/ directory with the following code:

The Auth service that you just created contains functions to deal with different steps of the sign in/sign up process. The following list briefly summarizes these functions and what they do:

Besides these functions, the class contains a field called auth0 that is initialized with values extracted from your Auth0 application. It is important to keep in mind that you have to replace the <AUTH0_DOMAIN> and <AUTH0_CLIENT_ID> placeholders that you are passing to the auth0 field.

Note: For the <AUTH0_DOMAIN> placeholders, you will have to replace them with something similar to your-subdomain.auth0.com, where your-subdomain is the subdomain you chose while creating your Auth0 account (or your Auth0 tenant). For the <AUTH0_CLIENT_ID>, you will have to replace it with the random string copied from the Client ID field of the Auth0 Application you created previously.

Since you are using the Auth0 login page, your users are taken away from the application. However, after they authenticate, users automatically return to the callback URL that you set up previously (i.e., http://localhost:3000/callback). This means that you need to create a component responsible for this route.

So, create a new file called Callback.js inside src/Callback (i.e., you will need to create the Callback directory) and insert the following code into it:

This component, as you can see, is responsible for triggering the handleAuthentication process and, when the process ends, for pushing users to your home page. While this component processes the authentication result, it simply shows a message saying that it is loading the user profile.

After creating the Auth service and the Callback component, you can refactor your App component to integrate everything together:

In this case, you are actually defining two components inside the same file (just for the sake of simplicity). You are defining a HomePage component that shows a message with the name of the logged-in user (that is, when the user is logged in, of course), and a message telling unauthenticated users to log in.

Note that you are using the Auth service in all your components (App, HomePage, and Callback) and also inside the Auth service. As such, you need to have a global instance for this service, and you have to include it in your App component.

So, to create this global Auth instance and to wrap things up, you will need to update your index.js file as shown here:

If you are interested in learning more, please, refer to the official React Quick Start guide to see, step by step, how to properly secure a React application. Besides the steps shown in this section, the guide also shows:

ReactJS is an awesome front-end library to employ in building your user interfaces. It is faster now because it runs on React Fiber and allows you to build more performant, smoothe UIs for your web and native applications.

ReactJS 16 came loaded with lots of new features and significant improvements. Kudos to the ReactJS team and the JavaScript open source community for all their efforts in making ReactJS a better tool.

Have you switched to ReactJS 16 yet? What are your thoughts? Let me know in the comments section! 😊